We got all the details from the owner of Zimman’s in Lynn. 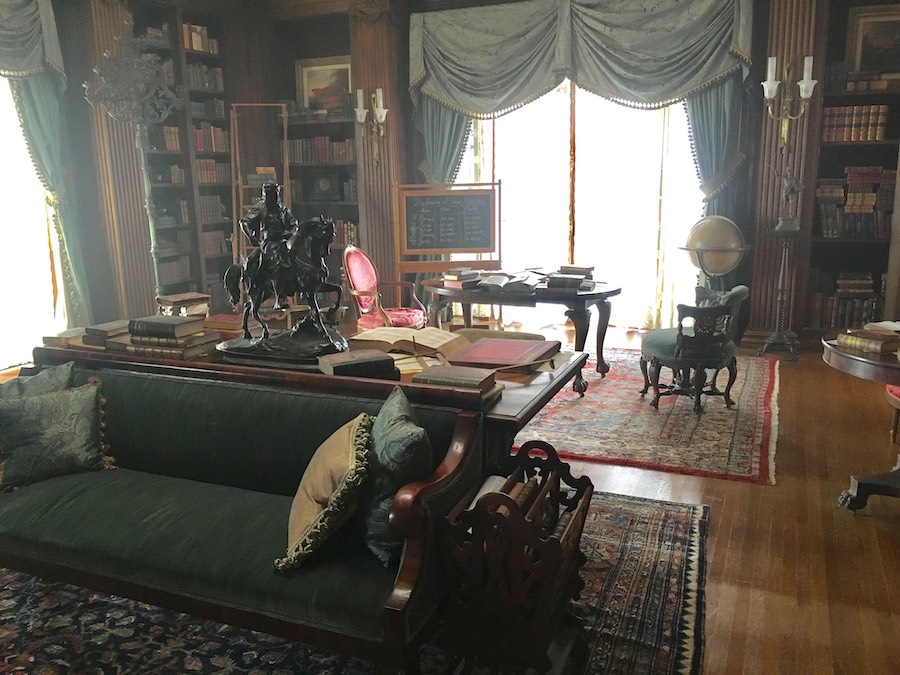 The study in the Laurence House on the set of Little Women. / Photo by Claire Kaufman

If you’ve seen the latest adaptation of Little Women, based on the 1868 novel by Louisa May Alcott, you’ll know the film shines for many reasons—magnetic performances, costumes that will have you seriously thinking of donning a hoop skirt, and an abundance of well-known Massachusetts locales as backdrops. But sets such as the March’s family home and Laurence’s estate are equally as dazzling as any other facet of the film—and they were brought to life with help from a local vendor to boot.

Set director Claire Kaufman and director Greta Gerwig sourced nearly all of the textiles featured in Little Women from Zimman’s, a more than century-old fabrics-and-furnishings store in Lynn. And according to Daniel Zimman, the store’s fourth-generation owner and vice president, the company is actually no stranger to the film industry: The retailer has supplied fabrics for a number of other buzzed-about motion pictures, Zimman says, including American Hustle, among other David O. Russell films, as well as the recent Ghostbusters reboot.

For Little Women, which was shot in late 2018, the team at Zimman’s spent four months reupholstering dozens of antique furniture pieces down in the basement level workshop of the 45,000-square-feet store. “It was an honor and really special to work on the film,” Zimman says. “It’s was a real collaborative effort and it’s fun to be a part of and see the finished product.” It’s not every day that a local business plays a major part in a critically acclaimed Hollywood film, so we asked Zimman to give us the lowdown on what it was like to play a part in bringing Little Women to the big screen. 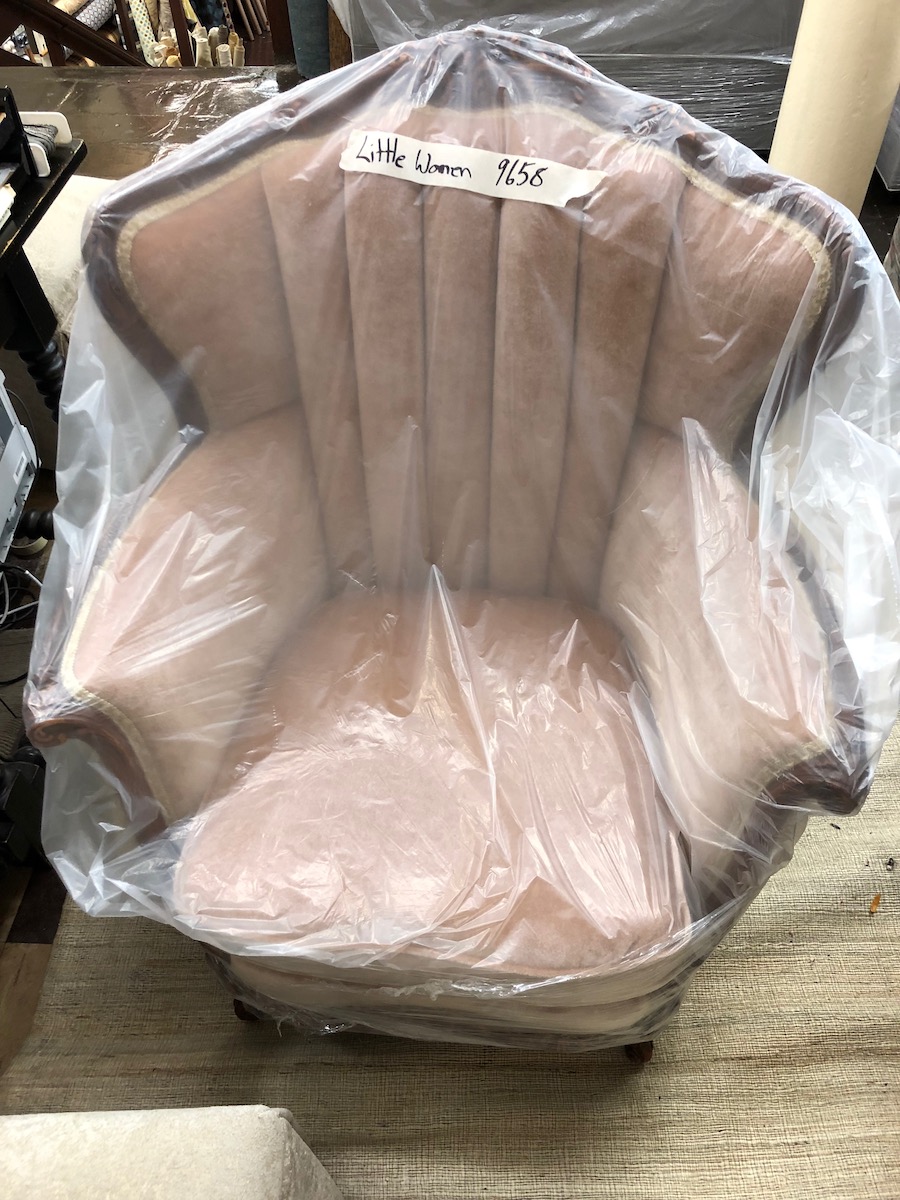 A chair from the set. / Photo courtesy of Zimman’s 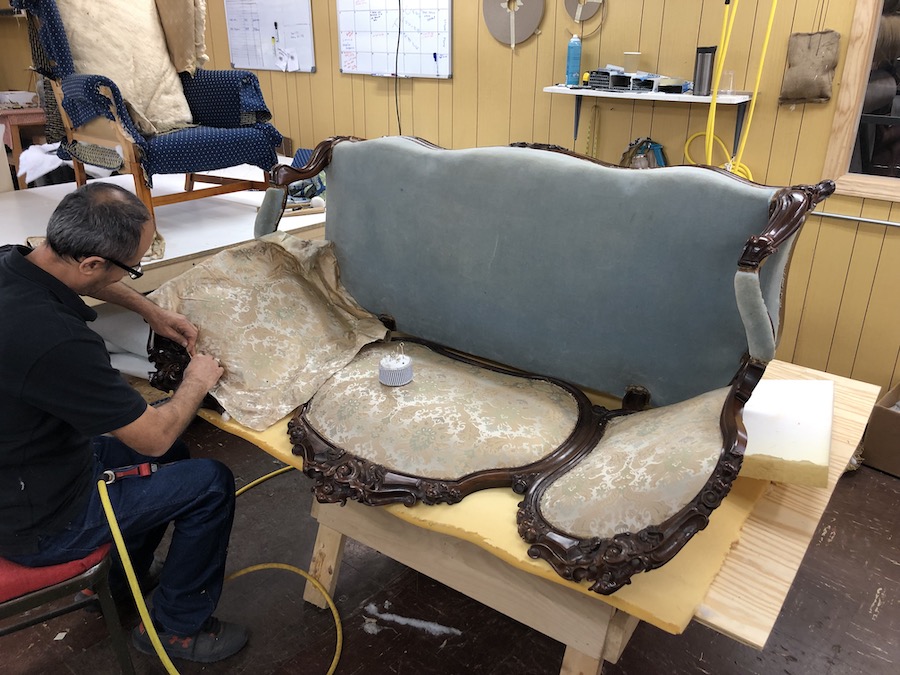 How did Zimman’s get involved in the making of the film?

When movies are shooting in New England, Zimman’s usually works on [them] if they’re needing fabric or furniture. We don’t go out and advertise that we’re here for the film industry; it’s really just word of mouth, and we’d worked with the [Little Women] production designers before. It’s a very small community in Massachusetts, so there are a lot of the same people over and over again working on these films.

So what specifically did your team create for the set of Little Women?

The two biggest things we do for movies are fabrics for window treatments or set designs, and reupholstery. So in Little Women, there were a lot of window treatments; [for example] in Laurie’s house, the study is all silk drapery. They also built a train set for the movie because there’s a scene where Jo is on the train from New York coming back to Boston, so we made 40 velvet seats for that.  It’s a funny thing: So much work goes into a scene that’s only five seconds long. But it has to be the right shade of blue and it has to be the right weight of velvet. Everything is so detail oriented and has to match the whole vibe of the movie.

We also [did] tons of reupholstery for this movie because it’s all vintage furniture. The [set decorating team] buys the pieces and brings them to Zimman’s, [where] we do a lot of the same work we do for customers: We strip it down so all you see is the wood frame, then we re-glue the joints, retie the springs, put in all new foam and Dacron, and then reupholster it. For this movie, we probably did between 40 and 60 pieces total. They’re small pieces from dining room chairs to huge banquettes, all done in period style. 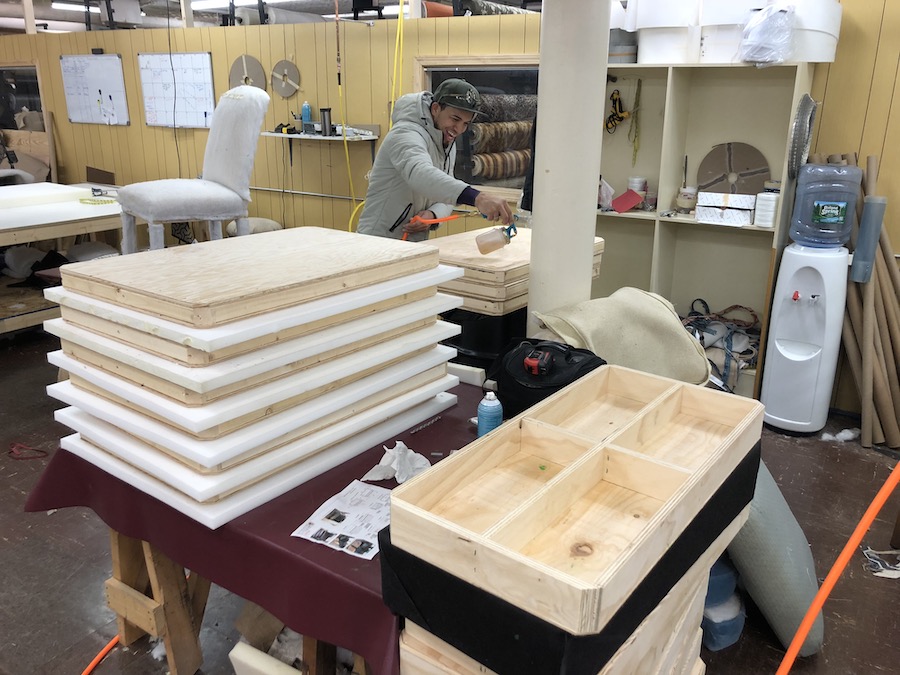 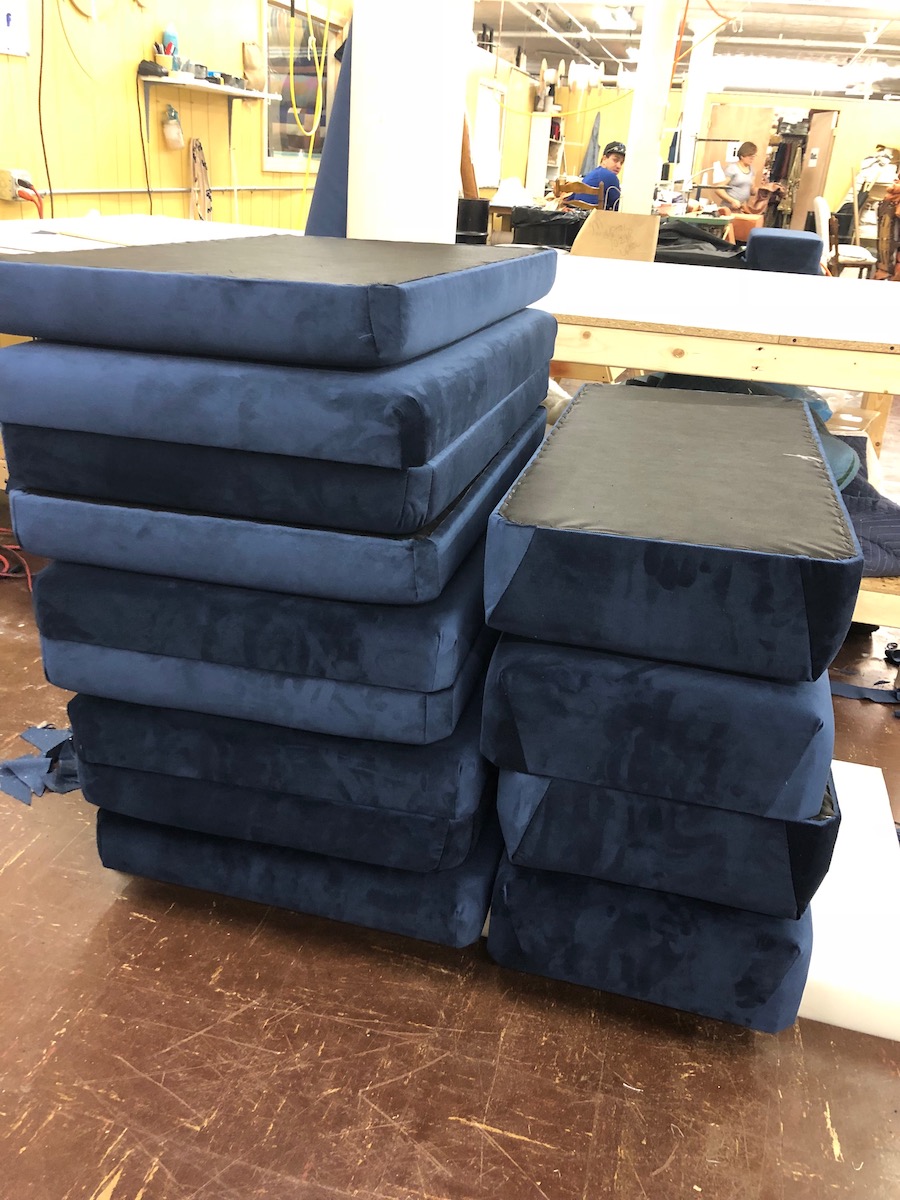 How were the fabrics featured in the film selected?

[The set team] has storyboards for every scene they’re going to shoot. So they’ll come in with a storyboard featuring inspiration pieces of furniture, as well as fabric and trim swatches, and say, “What do you have that looks like this?” If it’s something like an image from a castle in England, where we’re never going to be able to source the original fabric, we can find [things] that look very similar since we have 50,000 fabrics in stock. For this movie, I don’t think we worked with one custom fabric—every single piece of fabric we used was in house. We were mostly working in silks, so we’d go to the silk section of the store, and I’d say, “Here are 10 blue damasks, which do you like?” The set director then picks her favorite swatches and takes them to the director who chooses the one they like. It’s a process because [the fabric] needs to coordinate with everything else that’s going on in the scene. 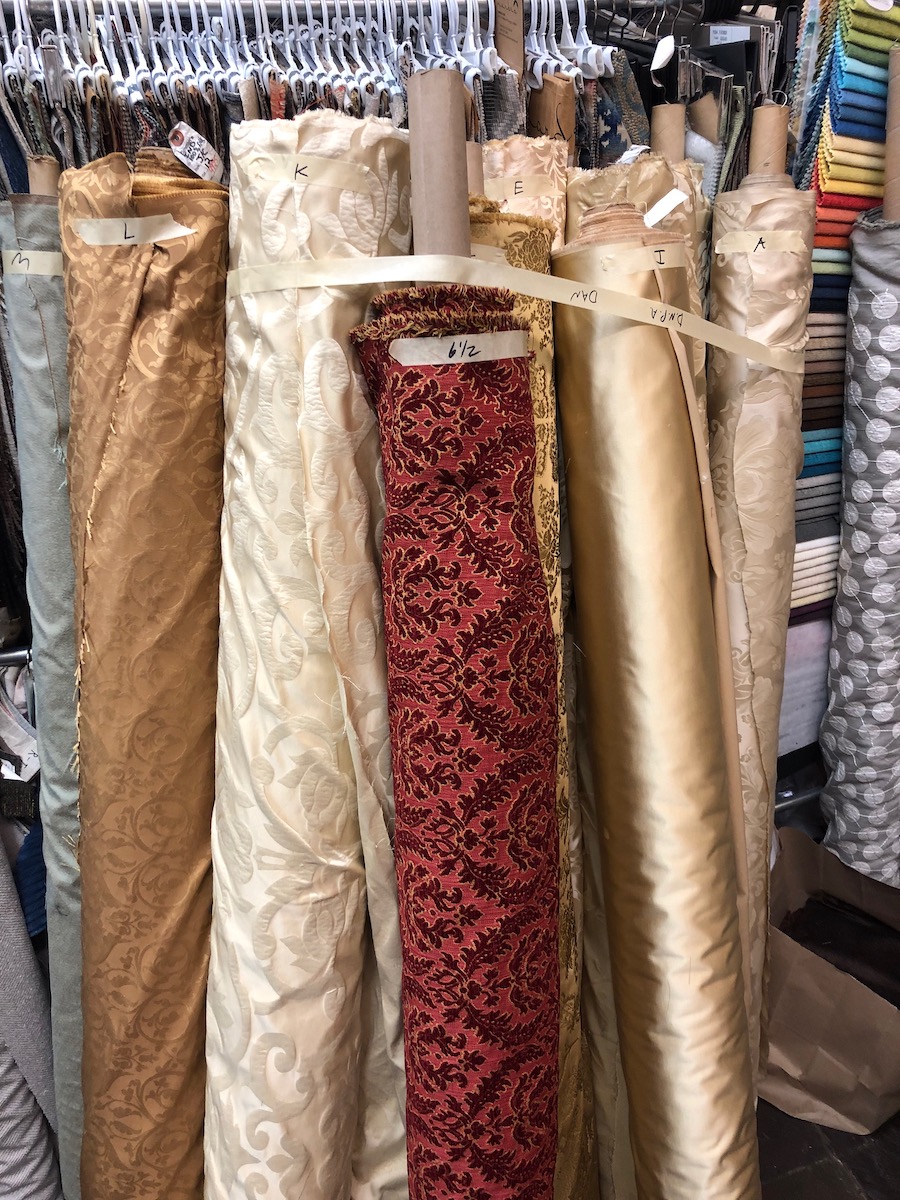 Fabrics used in the film. /Photo courtesy of Zimman’s

Were all of the textiles that ended up in the film truly of the time period?

[Historical accuracy] was so important, so the set team told me they wanted silks, velvet, cottons, and linens. We stayed away from synthetic materials and only used natural fibers. I also wasn’t sending along any modern patterns. We also used a lot of damask, a lot of stripe, a lot of solids.

Where were the fabrics in Little Women sourced from?

Of the pieces your team worked on for the film, what’s your favorite?

Meryl [Streep]’s chair. It was a pink mohair chair that Aunt March sits on in her house. When they dropped it off at Zimman’s, it said “Meryl’s chair” on it, so that was cool. 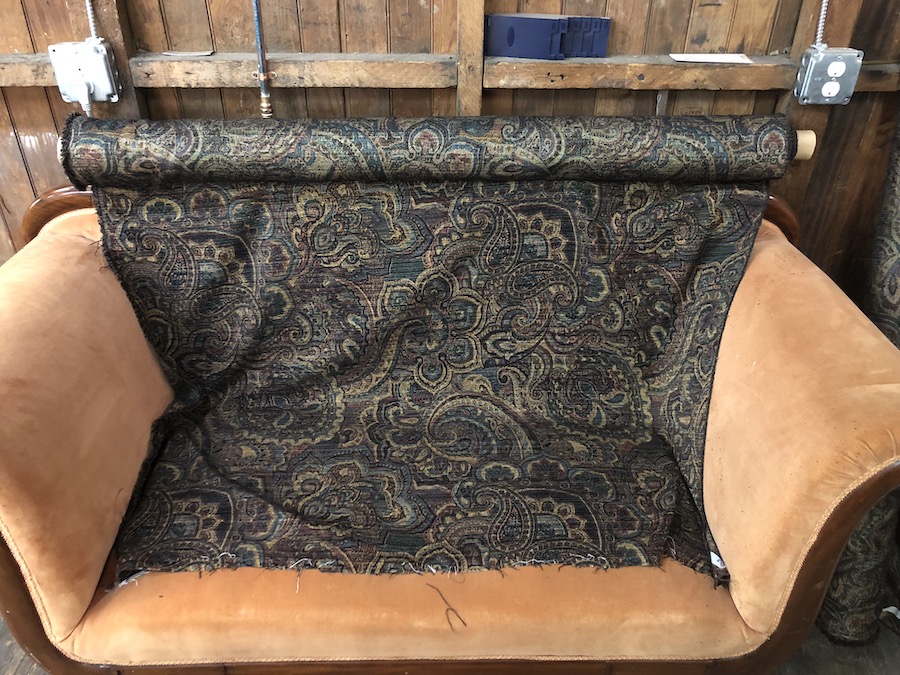 Before reupholstery. / Photo courtesy of Zimman’s 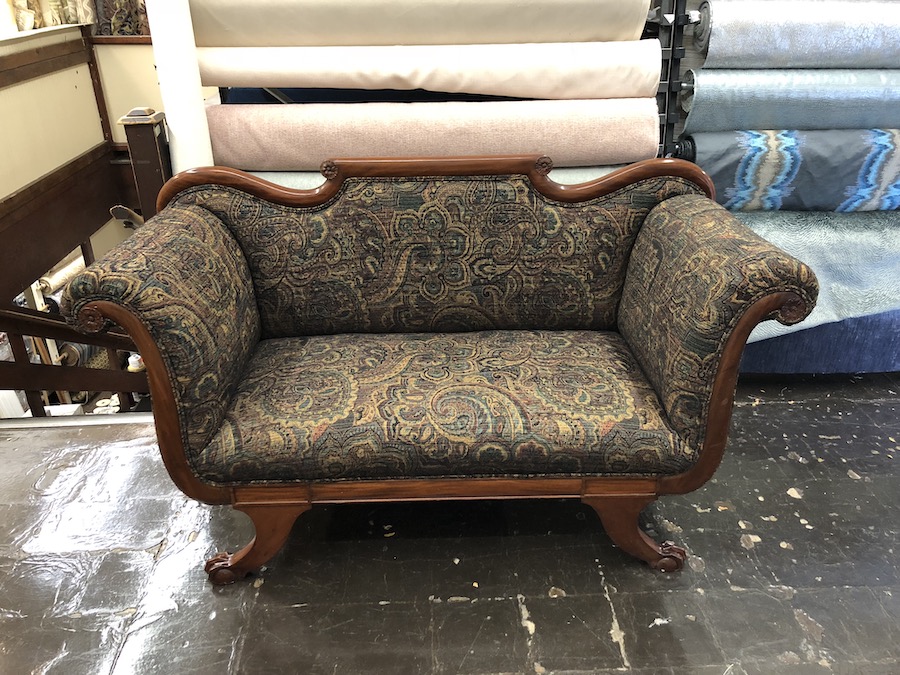 After reupholstery. / Photo courtesy of Zimman’s

What was it like finally seeing the movie in theaters?

We’ve done tons of movies but, while watching this one, I was saying to my wife, “Oh my god. That’s from the store, that’s from the store” during every scene. In the first two minutes of the movie, Meg goes into a silk store, which has rows and rows of silk that we lent from my personal collection. So all of those [fabrics] were from here, and that was an integral part of the story, too, because later she gets in a fight with her husband because they can’t afford the silk. With something like Ghostbusters, there’s so much going on that they may have bought 1,000 yards of fabric, but it might all be featured in one scene. Whereas [in Little Women], we worked on almost every piece of furniture in every single scene. I’m happy to do a five-second scene for a movie, but [we worked on this film] from start to finish. 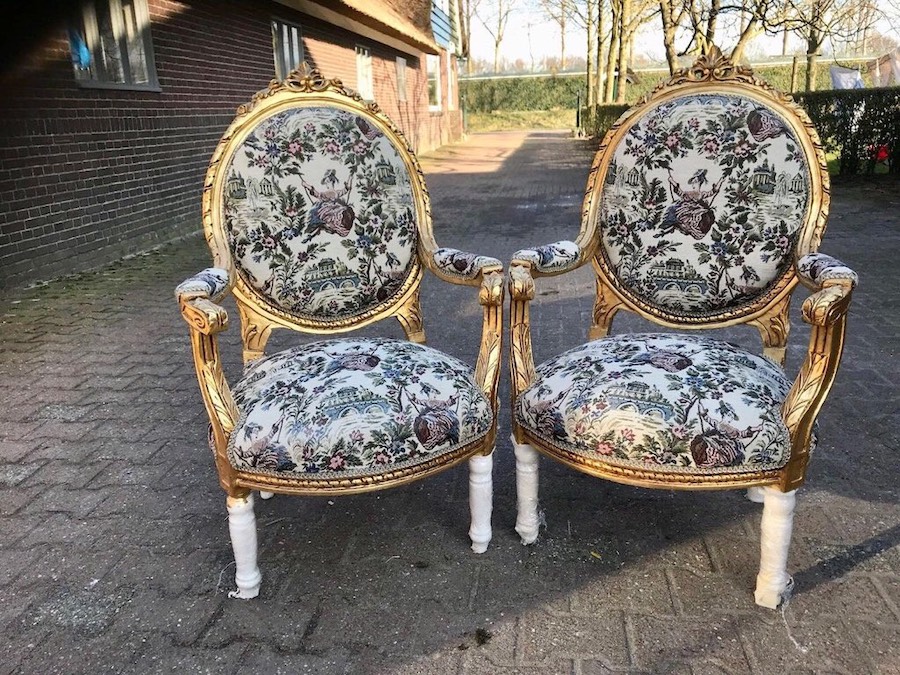 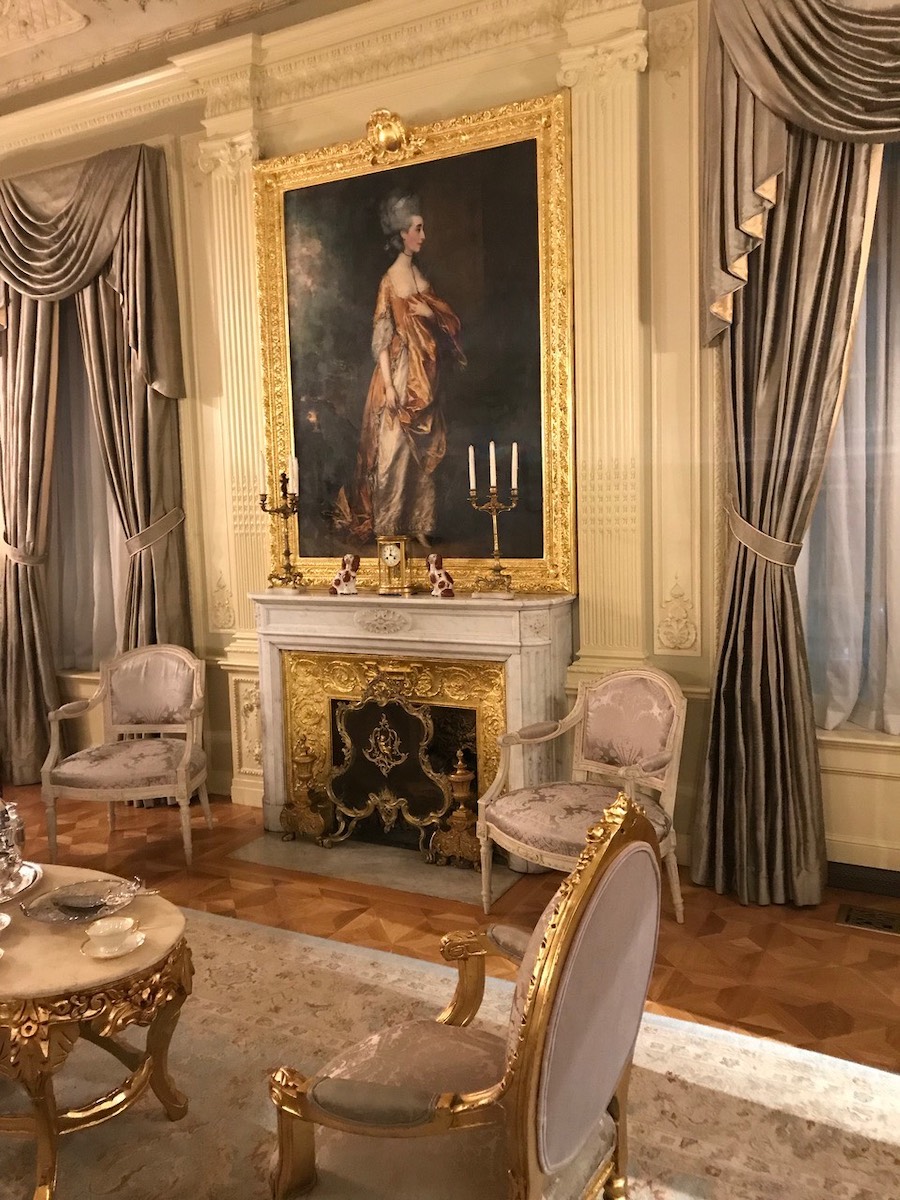 Antique chairs on the set of Little Women, upholstered in silk damask. / Photo by Claire Kaufman