Why There’s a Giant Egyptian Statue on City Hall Plaza

The 25-foot-tall figure is turning heads this week. 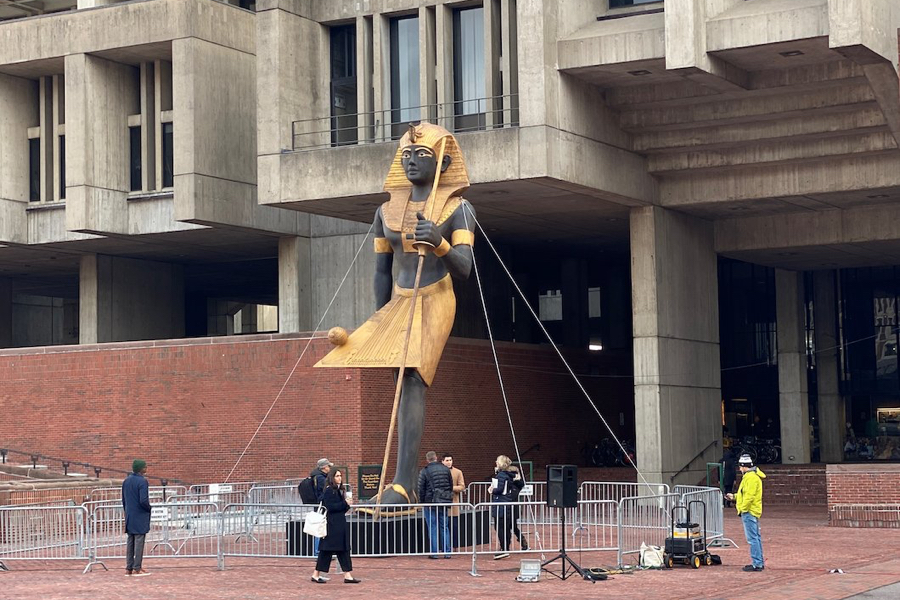 Without warning or explanation, a grand and eye-catching figure that seems plucked from the bowels of an Egyptian pyramid appeared Tuesday morning right in front of Boston’s City Hall. Standing 25 feet tall, weighing in at a reported two tons, and painted in lustrous gold, the statue seems strangely at home there, in front of a government building that doesn’t not look like some kind of tomb.

But what, exactly, is it doing there? Have Marty Walsh’s efforts to spruce up City Hall Plaza gone in a new and unexpected direction? Has the next-door Dreamland Wax Museum acquired its biggest piece yet? Are some extraordinarily motivated protesters up to something?

People who spotted the thing on the way to work had plenty of questions.

Bamboozled exiting gov center this morning…not sure why this here but I’m not mad at it pic.twitter.com/14XCKGKqRu

And by late morning, Mayor Walsh had some answers. It turns out the grandiose statue—a replica of the real-life 3,300-year-old Wooden Guardian Statue of the King—made its debut in Government Center to advertise the upcoming arrival in Boston of  KING TUT: Treasures of the Golden Pharaoh, an exhibition of priceless Egyptian artifacts that will debut at the Castle at Park Plaza in June, in partnership with the Museum of Science, the city says. The traveling exhibit, currently on display at the Saatchi Gallery in London, is in the midst of a world tour celebrating the 100th anniversary of the discovery of the king’s tomb, which archaeologists unearthed in 1922.

“This exhibit is one of the most interesting and exciting in the world, and I’m proud that Boston will be the only Northeast city to host this collection,” Walsh says in an emailed statement. “This is a wonderful opportunity for people from all across the region to see history first-hand, and we look forward to welcoming visitors from across the country to experience the King Tut collection.”

The announcement confirms a report from the Art Newspaper last November that the exhibition was set to be displayed in the city later this year. This will be the first time in more than 50 years that King Tut artifacts have been displayed in Boston, and the largest touring exhibition of the objects ever.

As for the statue, it’ll be standing guard at City Hall between now and January 22, in case you want to pay your respects.