Tune into a Zoom webinar or take to the streets. 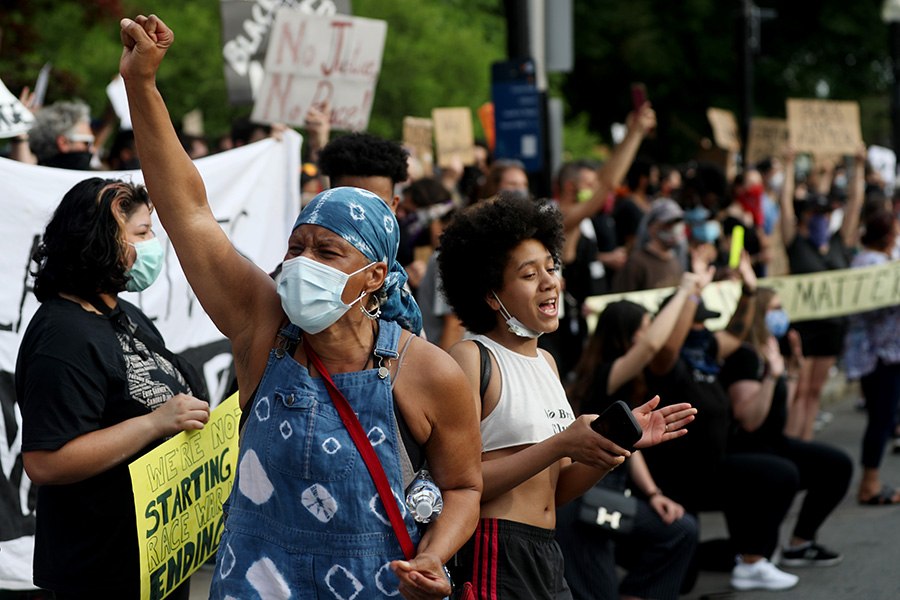 BOSTON, MASSACHUSETTS – JUNE 04: Ife Franklin raises her first during a protest in the Jamaica Plain neighborhood on June 04, 2020 in Boston, Massachusetts. (Photo by Maddie Meyer/Getty Images)

You can honor Juneteenth, the anniversary of the day in 1865 when the last group of enslaved people in the United States were freed following the end of the Civil War, with events organized by the Front Porch Arts Collective, Castle of Our Skins, and more.

You don’t have to wait until Friday to start your Juneteenth celebration—kick things off Wednesday night with the Front Porch Arts Collective’s virtual dance party. Boston’s DJ Why Sham will be spinning a lively soundtrack of music by Black artists, so you’ll surely shake off those hump day blues in no time.

After you’ve warmed up at the virtual dance party, get ready to sweat—Front Porch is keeping the fun going with a virtual Zumba session, hosted by musical theatre actress and choreographer Yewande Odetoyinbo. Newbies and Zumba experts alike are welcome to join this fun, high-energy class (and if you find yourself hooked on Zumba, Odetoyinbo hosts virtual classes weekly).

Castle of Our Skins celebrates black heritage through music, spoken word, and other various art forms. In honor of Juneteenth, you’re invited to mix yourself a drink and tune into their second “Poetry Nightcap” event, featuring poet and literary performer Regie Gibson. 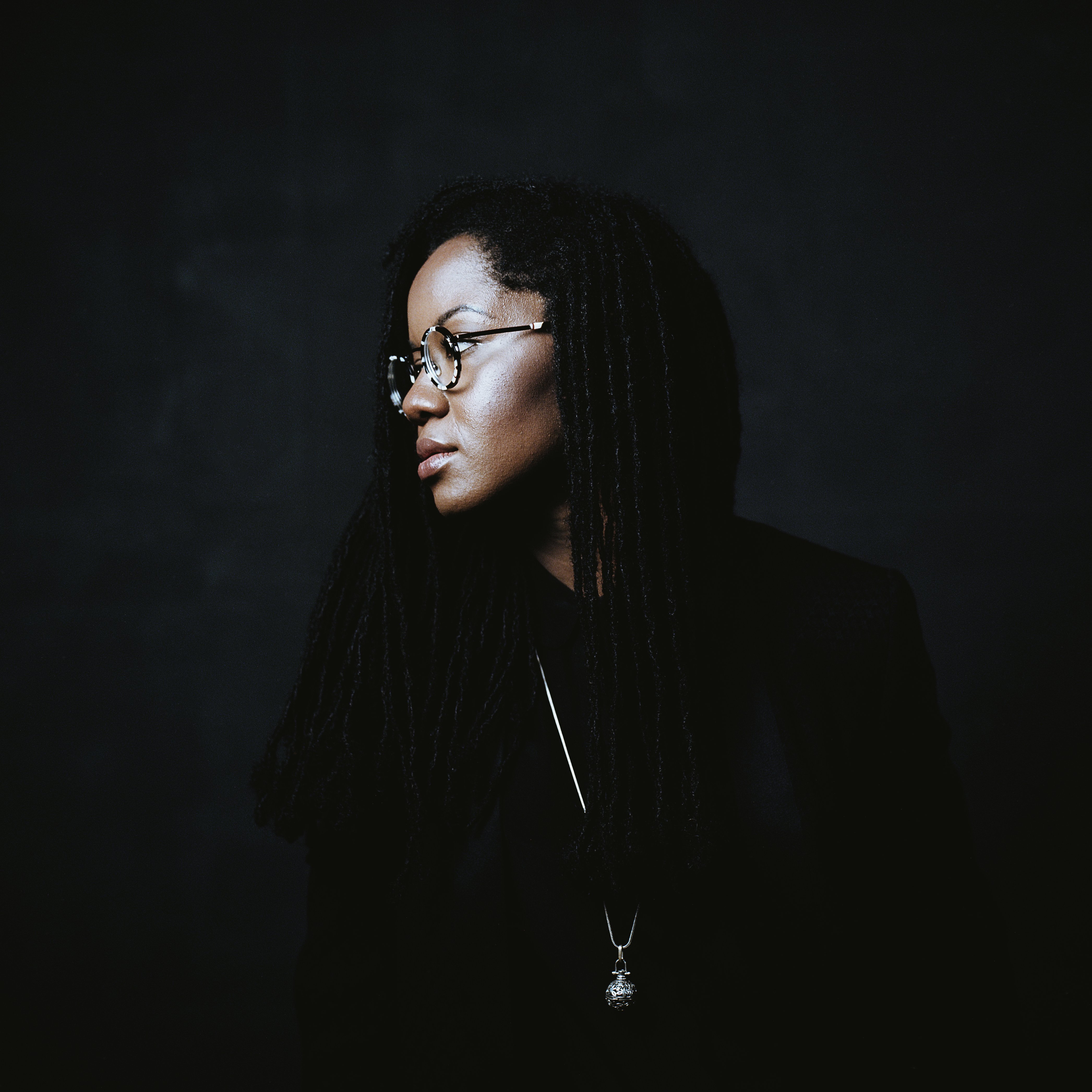 Back in April, Castle of Our Skins invited Black and African Diaspora composers to take part in a unique challenge: To compose a 30-second piece for solo piano, solo viola, or viola-piano duo. Now, the works of the 18 composers who responded are premiering for the world on social media, week by week. On Juneteenth, Bahamian-American composer Shannon Sea will present her work for viola, “Hannah Elias II,” live on the Castle of Our Skins Facebook and Instagram pages. Make sure you tune in on time for this one!

Missing the live music and cocktails from Darryl’s Corner Bar and Kitchen? Friday, you can capture the vibe of the beloved South End spot by ordering Darryl’s southern fare for takeout or delivery and tuning into the restaurant’s 10-hour music marathon. In honor of Juneteenth, Darryl’s will “celebrate the healing and transformative power of Black music” for ten hours straight, streaming live performances direct from the restaurant. Artists like NWASoul, Valerie Stephens, Pat Loomis, and Sympli Whitney are included in the lineup, and DJ Val Beatz will spin classics in between sets all day long. A donation to Darryl’s of any amount will get you a ticket for the event—but if you spring for the Virtual VIP ticket, you’ll also receive a specialty cocktail kit available for pickup.

Concert with Dzidzor: Freedom as an Act of Practice presented by the Boston Public Library

The BPL’s beloved Concerts in the Courtyard series has gone online, and on Friday, African folklore artist Dzidzor will take the virtual stage. Dzidzor is known for her unique style of call-and-response storytelling, which promises to pull audiences in—even through a computer screen.

Boston’s Black Lives Matter protests are far from over. This peaceful rally in Dorchester is meant to advocate for liberation from mass incarceration and over-policing. Attendees are asked to wear green, red, or black clothing, with a mask of course, and Dorchester Art Project will have sign-making materials on site. DotHouse Health will also be present to distribute hand sanitizer and sign attendees up for COVID testing. Guest speakers include Jua Robinson, the Executive Director of the Boston Collaborative, musician Caleb McCoy, and Dálida Rocha, the Political Director at SEIU Local 615.

How to Build an Anti-Racist Movement, presented by the Boston Globe

Best-selling author Dr. Ibram Kendi has been named director of the new BU Center for Antiracist Research, and on Friday, he’s joining the Globe’s Editorial Page Editor Bina Venkataraman for a Zoom webinar about the future of anti-racism. The protests in the wake of George Floyd’s murder have increased the country’s awareness of the legacy of slavery and ongoing institutional racism, poising the United States to build an anti-racist movement. Kendi and Venkataraman will discuss what that movement will look like, and how we can hasten its progress. 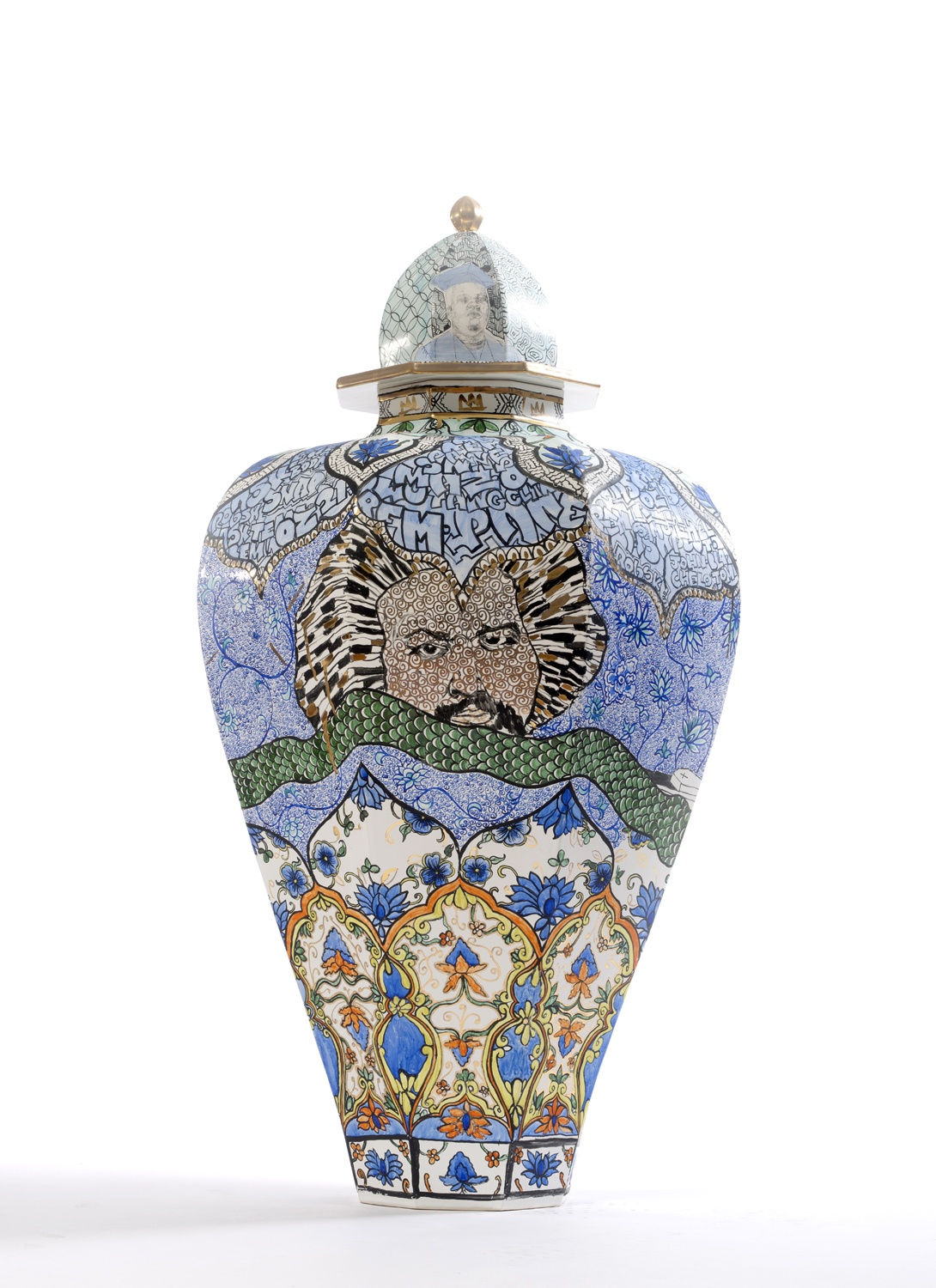 Law and Order: The Reincarnation of Frederick Douglass (2017), Roberto Lugo. This work is the basis of the MFA’s art-making event, and the artist will also be giving a Spotlight Talk during the event. Image courtesy of Roberto Lugo

This “musical speakout and rally,” organized by Mass Action Against Police Brutality, will feature performances by a lineup of local artists, including Bob Diesel and MC Natural Bliss. The event is meant to support local families who have lost loved ones to police violence by raising money to send a delegation to the National Mother’s March in Minneapolis later this summer.

Boston JerkFest, an annual celebration of Caribbean food, has been a local tradition for the past seven years. While the virtual version of the event won’t happen until the weekend of July 10, you can get a taste of things to come with Jerk Fridays, smaller-scale events featuring jerk food from chefs across the city. For the inaugural Jerk Friday, on Juneteenth, the owners of Oasis Vegan Veggie Parlor will have vegan jerk food available for pick up and delivery, which you can pair with a lineup of virtual performances from  House of Nahdra, DJ Nomadik, Lady Enchantress and more.

The Royall House and Slave Quarters museum in Medford is teaming up with the Museum of African American History, National Parks Service, Friends of the Public Garden, and the City of Boston to present a new series called “Poetry as Protest.” The inaugural reader will be poet and playwright Dr. Malcolm Tariq, who will read from his debut collection, Heed the Hollow.

One of Boston’s most prolific Black writers right now, Jabari Asim has penned everything from plays to children’s books to works of scholarly criticism. This week, Porter Square Books is celebrating the release of Asim’s latest work, a poetry collection entitled, Stop & Frisk: American Poems, with a virtual reading. Asim will be reading from his new collection, and poet Porsha Olayiwola will also read from her debut work, i shimmer sometimes, too. The event is free, but any contributions collected via Crowdcast will be donated to Black Lives Matter Boston. 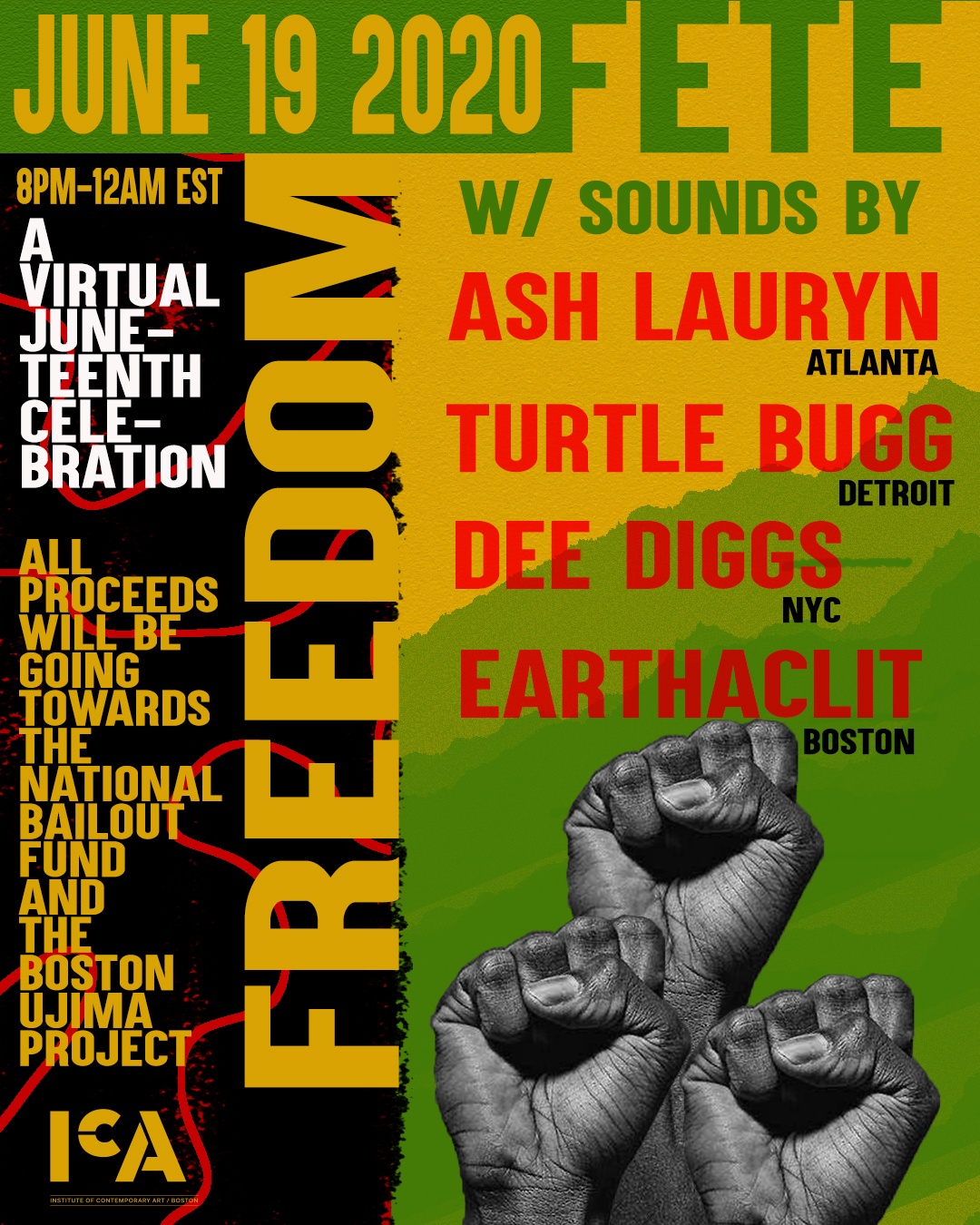 Design by Stefan Ringer. Image courtesy of the ICA

Freedom Fête: A Virtual Juneteenth Celebration presented by the ICA

Get ready to get off the couch and move your feet—the ICA’s virtual Juneteenth Celebration is going to be a virtual dance party, “exploring how much musical innovation is an ingrained part of the Black legacy.” Four DJs from across the country, including Boston’s EARTHACLIT, will curate musical selections honoring the African Diaspora, and they’ll all be donating their tips to Boston’s Ujima Project and the National Bailout Fund.

This Cambridge march, part of the nationwide 6.19 Day of Action, will honor Black freedom and Black resistance by advocating for three demands: defunding of the police, investment in Black communities, and the resignation of President Trump. The planned route winds its way from Harvard Square to Kendall Square, with stops at Cambridge City Hall and the Cambridge Police Station along the way.

Amid the heightened trauma of the past few weeks, the Front Porch Arts Collective is providing a space for Black artists to heal. This 90-minute session, open to self-identifying Black artists only, will feature music, breathing and singing. The event will be led by by Melissa Alexis, founder of Cultural Fabric, with music provided by Akili Jamal Haynes. 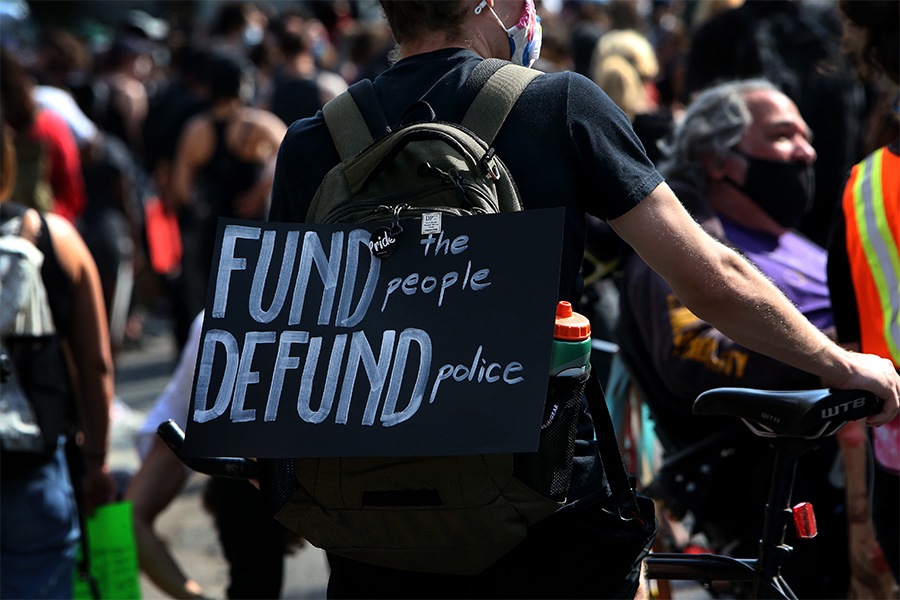 Hundreds marched with the Coalition of Black Youth in Boston on June 10, 2020. Photo by Barry Chin/The Boston Globe via Getty Images

This protest, organized by Answer Coalition Boston, is meant to keep the pressure on local officials to reallocate BPD funds before the final budget vote on June 24. Participants will be rallying for three demands: That perpetuators of police brutality be held accountable, that police are defunded and social services are fully funded, and that local communities are demilitarized, with the National Guard leaving the city and police taken out of Boston Public Schools.