There are plenty of examples of the iconic architecture style in the area.

If you don’t like the look of City Hall—or at the very least, you’re not curious about its design—you should X out of this story right now. Your assertions of ugliness are not welcome here. This is a list for Bostonians who want to learn more about one of the city’s signature architectural styles: Brutalism.

It’s true: Boston has one of the largest concentrations of Brutalist buildings in North America, and that’s no accident. In the ’60s, a wave of urban renewal laid the foundation for many of the city’s Brutalist structures, including City Hall. But there’s more than just Government Center to gawk at. Brutalism, derived from the French term “béton brut,” or raw concrete, can be found in Roxbury, Cambridge, and beyond. Here, find five Brutalist creations that aren’t Boston’s most world-famous example. They’re worth taking a stroll to admire. 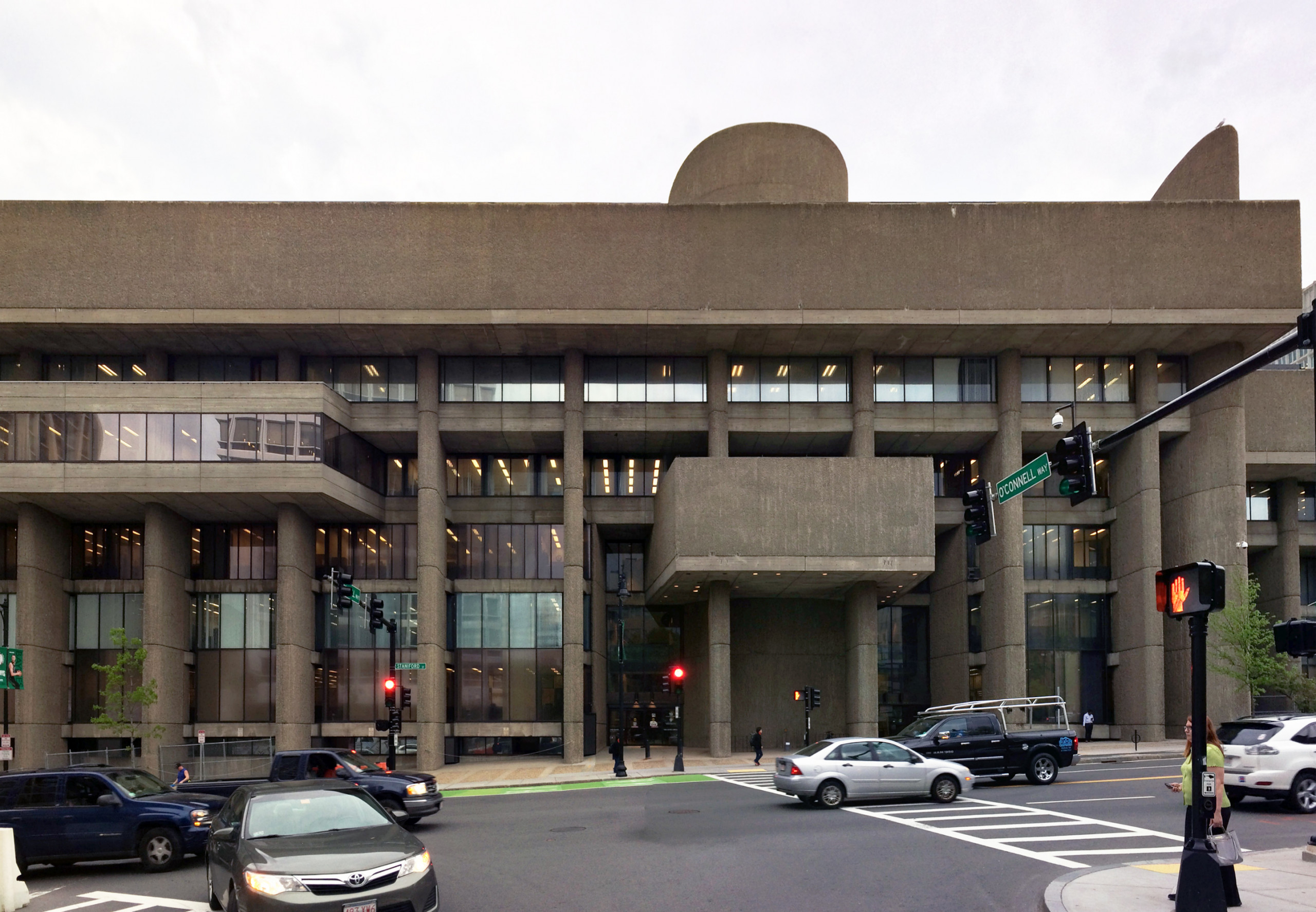 Whatever your feelings are about City Hall, you’ve probably noticed this Brutalist creation down the street from it. It’s called the Erich Lindemann Mental Health Center, and it was designed by renowned architect Paul Rudolph. Opened in 1971, the health center is part of a building complex that was never truly completed. (The place is also the sixth best building in Boston, according to us.) Its most distinctive feature is its rippling walls, which workers finished by hand, first casting the concrete in ribbed wooden molds before using bush hammers to chip away at the aggregate. 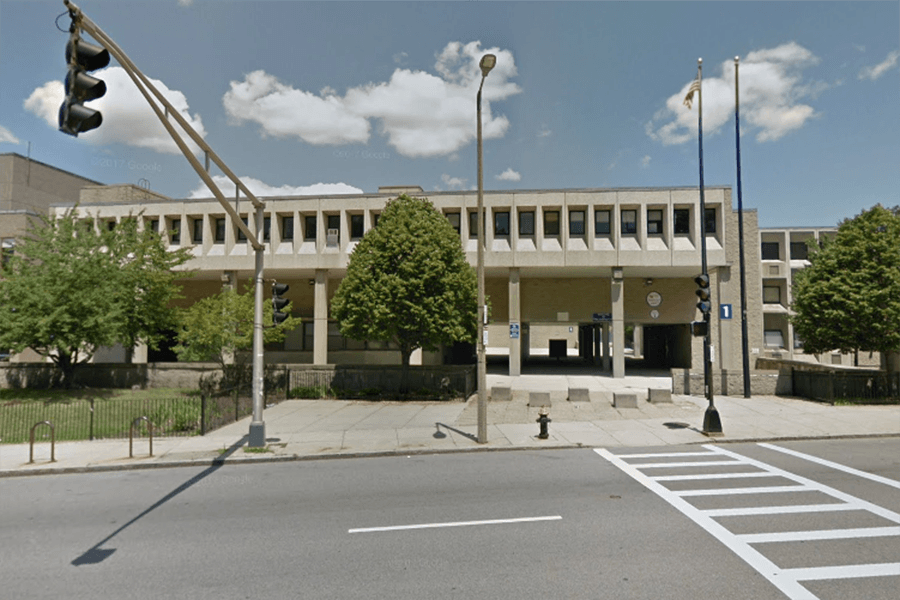 You might know Bauhaus architect Marcel Breuer from his chair designs; his Cesca chair and Wassily chair are some of his most recognizable works. But Breuer, who studied under Walter Gropius, also worked on some stunning buildings, like the Whitney Museum of Art in New York City. His only design within Boston city limits is Madison Park High School in Roxbury. The school is a series of concrete-faced boxes that, much like City Hall, resemble honeycombs. “The interconnected buildings house some of the most outstanding facilities of any high school in the country,” wrote Susan and Michael Southworth in their 1984 AIA Guide to Boston.

Before the Walgreens in Downtown Crossing was, well, a very grand drugstore, it housed offices and retail space for the Boston Five Cents Savings Bank. Finished in 1972, the curving concrete-and-glass structure was designed by Gerhard Kallmann and N. Michael McKinnell, two of City Hall’s architects, and is one of a few buildings of its kind in downtown Boston. According to the Boston Planning & Development Agency, the designers deliberately drafted its dimensions and “pie wedge” shape to complement the features of the 20th-century building next to it. A now-defunct magazine called Architectural Forum once described the bank as having a “a rugged airiness best appreciated at night,” per the BPDA. This still rings true today: Seeing the huge glowing windows after a brisk evening’s walk is quite the spectacle.

By now, you’ve probably noticed a Brutalist motif: boxes. While the design on the Christian Science Center Administration Building is less honeycomb-like and more grid-like, the concrete creation still dazzles. It seems to stand alone at the end of the Christian Science Plaza, which only adds to its grandeur. Inside, the offices were recently renovated, and the lobby now features a “media wall” that projects light patterns from the reflecting pool outside. 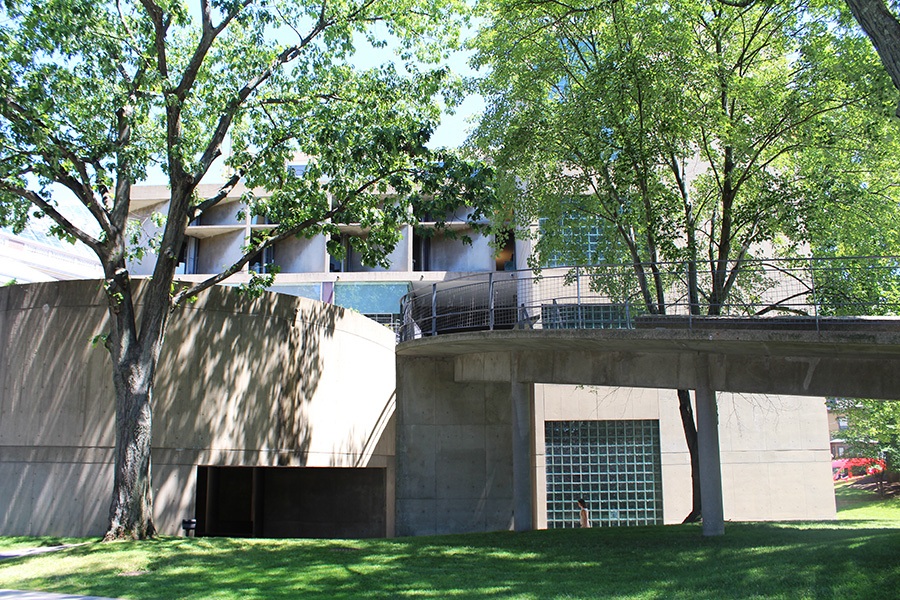 You might remember “béton brut” is the term that Brutalism is derived from. The guy who coined the term? That was Le Corbusier, the pioneering Swiss-French architect who designed some of the world’s most famous buildings. His only creation in the United States is on Harvard’s campus: the Carpenter Center for the Visual Arts. The Modernist structure looks like a different building from every angle. It’s highly encouraged to take a walk on its curving footbridge—and see those glass bricks in the walls sparkle.