Live music is back on the calendar for 2021. Here's what that means. 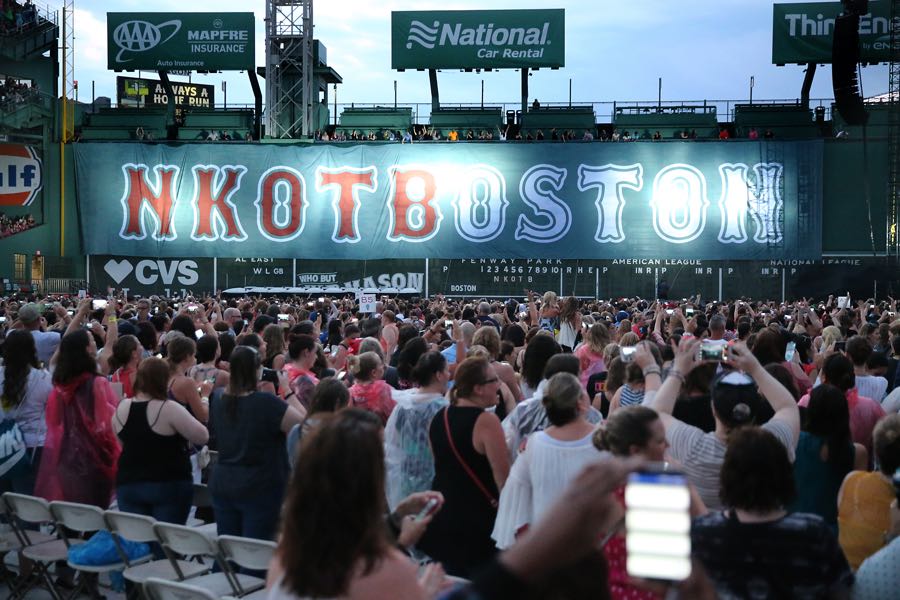 New Kids on the Block performing in concert at Fenway Park in 2017. This summer, NKOTB is set to return to the ballpark for Fenway’s first live concert with fans since the pandemic. (Matthew J. Lee/Globe staff)

No doubt about it, we took live entertainment for granted back in the good old days. I look back in horror at the last weeks before the shutdowns, when not once but twice I turned down the opportunity to see bands live in Boston just because I didn’t feel like it at the time. I had no idea what I would soon be missing. To put it mildly, I feel like it now!

Live music has certainly not been the priority this past year, and that makes sense. Packing screaming fans into sweaty venues the way we used to has just not been the reasonable thing to do during a pandemic spread by respiratory droplets, and per the reopening guidelines, it’ll be one of the last facets of our lives in this city to return. But the day when we can get back to dancing, shouting lyrics together, and doing some low-grade damage to our eardrums is fast approaching. In fact, take a scroll through event listings at some of your favorite clubs, and you’ll find showtime is drawing nearer than you might have thought, with smaller shows planned in some venues as early as mid-May, and many more to follow in the summer and fall.

Some of the rules are set to change on May 10 statewide, but take note: Boston itself plans to lag behind the state by three weeks when it comes to loosening some restrictions. August 1 is the date at which all the current state-mandated restrictions are supposed to disappear statewide, but that target date is set at August 22 in Boston.

So what exactly awaits the masses of freshly vaccinated Bostonians when concert halls throw open their doors this year? And what are the caveats fans ought to keep in mind before paying for tickets in the new normal? Here’s what we know so far:

According to local listings, opening night for many clubs is roughly a month away. On May 15, the Orpheum is set to host a Pink Floyd tribute band, Armor for Sleep will be at the Paradise Rock Club, and a stand-up comedy showcase will take the stage at House of Blues Boston. Later that month, on May 26, Girl Talk will be at Royale. Things really start picking up in June, when the newly renamed Leader Bank Pavillion kicks off a packed schedule of outdoor concerts beginning with Blackberry Smoke. New Kids on the Block will kick off a series of big-name concerts at Fenway Park, a lineup that includes Aerosmith,  Lady Gaga, and Billy Joel. Beliebers will file into the Garden on July 8. Concert promoters are bullish on the future: Most, including big concerts at Fenway, are selling tickets under the assumption they’ll be allowed to go on at full capacity. However…

There will be fewer fans at first

While Boston performance venues were allowed to reopen on March 22, clubs and concert promoters are very much at the mercy of state and city regulations, which, for the time being, have strict caps on crowd sizes. Until the rules are relaxed, smaller spaces are allowed to max out at 50 percent of capacity, or 500 people tops. At the Paradise, which has a maximum capacity of 993, that means the crowd would be capped at a little less than 500. But because of that crowd cap, the House of Blues would have the same crowd size, despite having a capacity of 2,200.

The rules are different at “large capacity venues” that can hold more than 5,000 people—so think Fenway, the Garden, and the Pavilion (which just clears the bar, at 5,200). In those spaces, the maximum crowd size is 12 percent of capacity. As of Monday, May 1o, that number can increase to 25 percent per the state’s latest update to its reopening plan. When it comes to large venues, Boston will follow that plan as well. There don’t appear to be any more increases in store until August.

Ultimately whether to perform will be up to the venues and artists, who will have to decide if it’s worth their while to play to a less-than-full crowd.

But if the current state of affairs had you thinking Aerosmith might step on stage for a crowd one-eighth the normal size, you might have to dream on. That’s according to an industry executive, who tells me that the bigger acts are likely to pass on Boston if the state’s rules keep crowd sizes too small to justify the steep cost of putting on a major tour. Bands big and small—but especially the big ones—will probably need to be assured that not just Boston, but other cities are going to be able to sustain full- or close-to-full-size crowds before they hit the road. Few of the major acts are saying publicly how low capacity they’re willing to go, but some may insist on 100 percent or bust.

I know, I know. The concept is controversial, and at least at the state level, there is little enthusiasm for requiring that Massachusetts residents carry such a thing. But venues could theoretically begin asking ticket-holders to show proof they’ve been vaccinated, or at least have tested negative for the virus.

The sports world will be the bellwether for live music. In New York, the big sports arenas have begun implementing a vaccine or negative test requirements for fans. The Buffalo Bills announced recently they plan to open games to 100 percent capacity for the upcoming season, but only for fans who’ve gotten a vaccine. Could Justin Bieber play to a packed house under similar rules? We’ll have to see how things progress over the coming weeks and months.

Some artists are taking a leap of faith

Take local hero J Mascis for example. He’s planning a Dinosaur Jr tour in the U.S. and Canada, with multiple dates in New England, starting in May. But he told the New York Times he knows that they’re all a gamble.

“We’re not naïve; we know we might have to reschedule,” he said. “But just to have something on the books somehow makes things a bit more hopeful.”

For now, smaller crowds will likely also be greeted with new rules designed to limit the spread of the virus. How each venue handles their responsibility to keep people apart will vary. But expect seats to be spread out, chairs on what used to be dance floors, and many other reminders that the pandemic is still here.

That extends to the stage as well. Current guidelines discourage the use of brass and wind instruments. Performers are asked to keep 25 feet away from the first row of audience members (or install Plexiglass barriers), and 10 feet apart from one another, and “wear face coverings during performances whenever feasible.”

No singing indoors (for now)

Singing will remain off-limits at indoor performance spaces until restrictions lift, at which point the state’s new rules allow singing as long as venues follow “strict distancing requirements.” The new state guidelines will allow singing indoors on May 10. The city will follow suit on June 1.

Keep an eye out for changes to the rules

But the question is: When? The city says it will roll back some restrictions once the COVID test positivity rate dips below 2.75 percent. As of April 2 that number was stuck at 5.2 percent. Hopefully vaccines speed that process along, but no one has announced a hard and fast date when we can expect to achieve that benchmark.

Some venues are not coming back

By Vanyaland‘s count, seven of Boston’s live music venues closed for good in the last year. That list includes Great Scott, which is in the process of reemerging in a new location with help from a grassroots investment campaign.

Help is on the way

In a development that will hopefully help the city’s remaining venues outlast this final stretch of the pandemic, a big batch of federal aid is about to kick in. At least, it’s supposed to. The $16 billion Shuttered Venue Operators Grant program kicked off on April 8, but some technical glitches appear to have kept clubs from applying. So stay tuned. When it’s up and running, the program will provide a huge windfall of cash to smaller venues of up to 45 percent of the revenue they lost in the pandemic. Clubs run by big companies like Livenation and AEG are not eligible.

Boston Calling is a no-go

You’d think an outdoor music festival might be the kind of thing that could work under the right circumstances, given all the fresh air and ample space to spread out. But it just wasn’t meant to be. “The health and safety of our entire community is always our top priority, and there was no appropriate scenario under which we could provide the Boston Calling experience you love and deserve,” a note on the festival’s website reads. So Boston Calling’s re-emergence has been pushed back to Memorial Day 2022.

Expect the resale market to be white hot

Once the newly vaccinated get the chance, you have to imagine throngs of fans competing to snatch up tickets to events. Combine that with potentially restricted capacity limits, and you’ve got a perfect recipe for skyrocketing costs (and, of course, people hoping to cash in on the low supply and high demand). For a glimpse of how this may play out, look no further than what’s happening to sports tickets in Boston right now, where Red Sox ticket costs hit new highs both on the resale market and through “dynamic pricing.”

“StubHub is already seeing strong demand from sports fans nationwide and in Boston for teams that have welcomed fans into stands, and we expect a similar trend once tickets for concerts and shows become available,” Adam Budelli, head of partnerships at StubHub, says in an emailed statement. “As venues reopen, we may see the impact of pent-up demand and limited seat capacity on ticket prices. For example, the average Red Sox ticket price right now is slightly higher than the start of the 2019 season, but we anticipate prices will level out as Fenway Park capacity guidelines change.”

If we learned anything this past year, it’s that anything can happen. So hope for the best, plan for the worst, and always read the fine print. Livenation’s Ticket Refund Plan, for example, promises automatic refunds if a concert is canceled, and gives buyers the option to have their ticket costs refunded if an event is postponed and not rescheduled within 60 days.

If you’re craving live music, you don’t have to wait to see it in person. Boston artists have made the most of the past year by performing online. Whether it’s Club Passim’s Passim Streams or City Winery’s CWTV, there are plenty of ways to support both musicians and venues by tuning in from home.