Time yourself to see how long it takes. 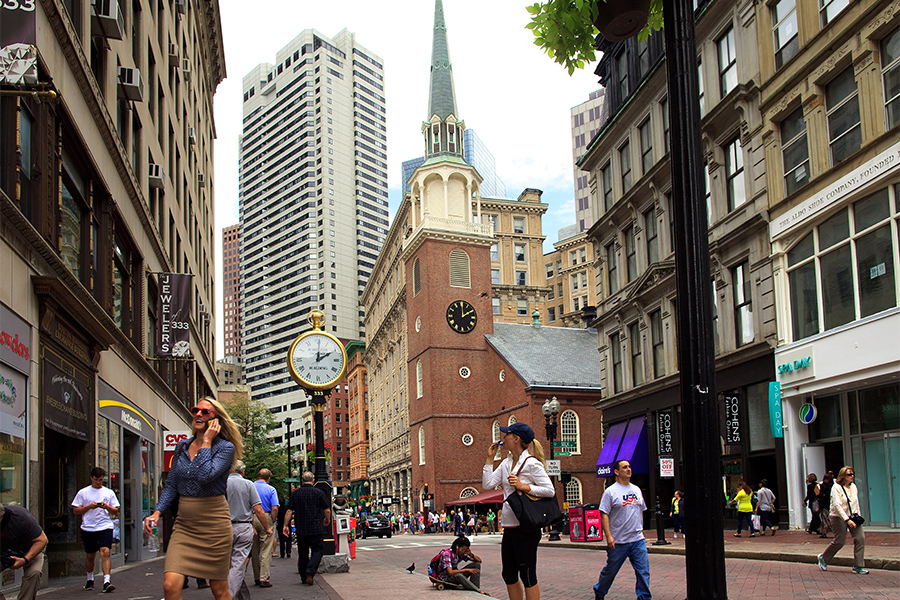 Have you ever visited the center of an old European City where the main square has a massive and intricate clock from the time before people had watches? What about the train stations with clocks on every platform reminding us that standardized time was needed for trains to run “on time”? When was the last time you noticed the digital clock that switches back and forth from the time to the temperature under a big bank sign hanging on the edge of a commercial strip?

Today, you probably get the time from the cell phone in your pocket (and if you’re like me, you pull it out to check the time only to find yourself scrolling through Instagram five minutes later with no idea what time it is). If you’re one of those people who walks down the street checking their phone, you probably haven’t paid much attention to the surprising number of clocks still present in the city fabric around you in Boston. Some are subtler than others—and not all of them are equally reliable. But Boston’s relative age means that the city has quite a few of these clocks, many of them dating back to the era when it was a public service for cities to provide the time. Try taking a walk around Downtown Crossing, and you’ll find plenty of these clocks, each with its own special story. Here are eight of them, all within an easy walk of each other.

No clock in Boston has greater visibility than the Custom House. With clock faces on all four sides of the tower, 11 1/2-foot minute hands, and beautiful illumination at night, this clock can be seen in every direction, whether it’s from a ferry on the harbor, a picnic on the Greenway, or a stroll down State Street. If you ever see time moving backwards, it’s likely because David Hochstrasser, who owns the Clock Shop in Hanover, is working on the giant timepiece. (He also repairs the clock on the Old State House up the street.) If you visit the observation deck on the 26th floor, stop by the 23rd floor on the way down to see the back of the clock.

The clocks on the south and north side of the Old South Meeting House tower have been offering the time to people hurrying past since 1768, when colonists were still calling today’s Washington Street “Cornhill Street.” The clock and the building have survived the British, the Great Fire, and plans for demolition, making it, according to the Revolutionary Spaces website, “the nation’s oldest American-made tower clock still operating in its original location.” The simple black background with gold roman numerals is elegant in an unfussy New England-y way.

Across the street is a clock that looks like a pocket watch on a post. It stands outside the Boston Jeweler’s Exchange and serves as a sort of useful billboard. The seven-story art deco building still houses 155 shops focusing on diamonds, jewelry, and, of course, watches. As a testament to the quality of workmanship you can find inside, the clock out front always shows the correct time.

Walking south on Washington you’ll miss it, but heading north is a piece of the stone facade of the building that once stood where Millennium Tower is today. A clock that once hung high above the street on the previous building now sits at eye level, encircled by detailed stone carvings and a kindly lion head. It’s most noticeable at night when the foot traffic dies down and it glows softly.

When you find yourselves in the midst of the pedestrian hubbub at the heart of Downtown Crossing, look up. You’ll find two clocks on the old Filene’s building, designed by Daniel Burnham, which were restored with the redevelopment by Millennium Partners. Amidst the Primark Flags are two classic clocks that have been restored and now offer the correct time for everyone running from the subway to a meeting (you know, when we go back to our offices). The subtle detail here is the word “HAVAS” under the clock on the southwest side—they’re the parent company of Arnold Worldwide, the advertising firm headquartered inside.

If you’ve never noticed this gothic building of cream and red stone overlooking the intersection of Lincoln and Summer Streets, then you probably haven’t seen the glazed tile on the fifth floor. The center of the clock looks like a flower with a white petal for each hour, all surrounded by square tiles that glow gold in the morning light and look bluish black in the afternoon sun.

The best thing about the clock on the top of South Station overlooking Dewey Square is that it has a giant stone eagle on the top of it, making it the most dramatic and cinematic clock you’ll find in the city. The second best thing is that you can see it from several blocks away on Atlantic Avenue or Summer Street as you head towards your train (or bus). The third best thing is that clock is set to be three minutes fast, so if you’re using it to decide when to run to catch your train and you don’t know this, you’ll be guaranteed to arrive on time, even if you have to navigate through bustling crowds. The consistently incorrect time is thanks to South Station employee Jamie Kelly, who winds the clock by hand twice a week.

Outside of COVID-times, you can take an indoor route between Devonshire and Federal Streets by cutting through this building. When the route is open, head to the middle of the passageway, and look above the security desk for a work of art that also tells time. This piece, by designers Humans Since 1982, consists of a 28 by 10 grid of black circles with white hands that each look like a tiny clock. Once per minute, the little hands shift into focus and present the time like a digital clock. For the other 55 seconds, they move in an abstract pattern that makes the time completely unreadable. While the building is closed to the public during the pandemic, you can watch the visual ballet from outside the doors on Franklin Street.