How Did Juul Rise So Fast and Crash So Hard? 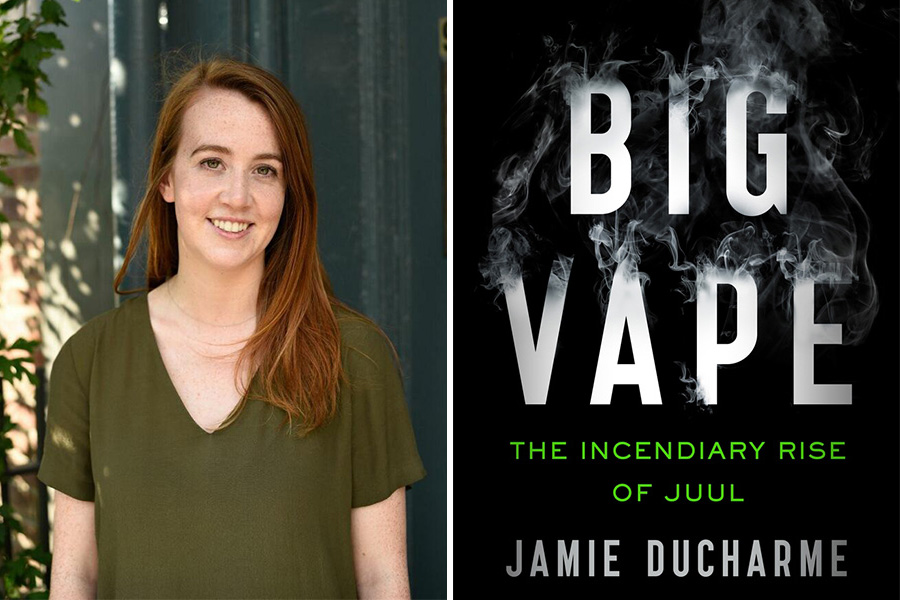 As a health reporter, Jamie Ducharme has been covering vaping for years, but it wasn’t until the steady increase in attention on teen Juul usage in 2018 that she began focusing more closely on the company that became briefly synonymous with the practice. What she learned led first to a cover story at Time, where she’s a health correspondent (“How Juul Hooked Kids and Ignited a Public Health Crisis”), and eventually Big Vape: The Incendiary Rise of Juul, her first book.

In Big Vape, Ducharme, Boston magazine’s former wellness editor and a New Hampshire native, goes all the way back to the origins of the company, when it was just two Stanford grad students who were trying to find a healthier way to smoke, and charts the meteoric rise of Juuling as a trend, the ultimate multi-billion dollar valuation of the company, and its subsequent crash to earth in a fury of lawsuits, leadership changes, and rampant accusations that the company had intentionally marketed its product to teens. It’s a whirlwind ride to the top that shows exactly what happens when Silicon Valley takes its usual “move fast and break things” energy to a major public health issue with a long history of regulation and lawsuits. A docuseries of the book is currently in development.

For those who had mostly been following Juul through media reports about teen vaping, the book will be a story of unexpectedly high drama. But it’s also a frustrating saga, particularly in light of what the product’s impact on smoking cessation efforts could have been if the company had just made a few different choices along the way. Early efforts to make Juuling look cool only led to those accusations of marketing to kids, and the company’s interest in differentiating itself from Big Tobacco ultimately meant that it wasn’t hiring people with expertise in the industry. “It could have been so different a product if it had been used appropriately and marketed appropriately. And instead it just sort of spiraled,” Ducharme says. “I just found that tension really interesting, that sort of, ‘Where did this go wrong? And is it too late for it to do the thing that it was supposed to do?’”

The book charts a series of missteps the company made over the years, including an effort to provide its own anti-smoking curriculum in schools—a questionable choice for a vaping company, and one Ducharme mentions as one of the more surprising discoveries in the reporting process: “It’s just kind of unfathomable to me that it got to the point of actually paying schools to do this program.”

Even the admittedly sleek design of the product turned out to be a double edged sword for them. On the one hand, earlier e-cigarettes had been seen as clunky and uncool, and there’s an argument to be made that making the product look hip was the only way to get smokers to actually start using it. But there’s a limit to how far it’s wise to take hipness when you’re selling an addictive nicotine product, as Ducharme points out.

What, exactly, the future holds for Juul depends in part on how the FDA decides to regulate it, a decision that could come through later this year, as Ducharme has reported, and in part on how it resolves its various legal troubles. But for those wondering how a smoking cessation product could seize so much public attention, Big Vape holds some fascinating answers.