How a Black-Owned Digital Boston Radio Station Launched, Survived, and Thrived during Lockdown

The timing couldn't have been worse, but Spark FM found its audience. 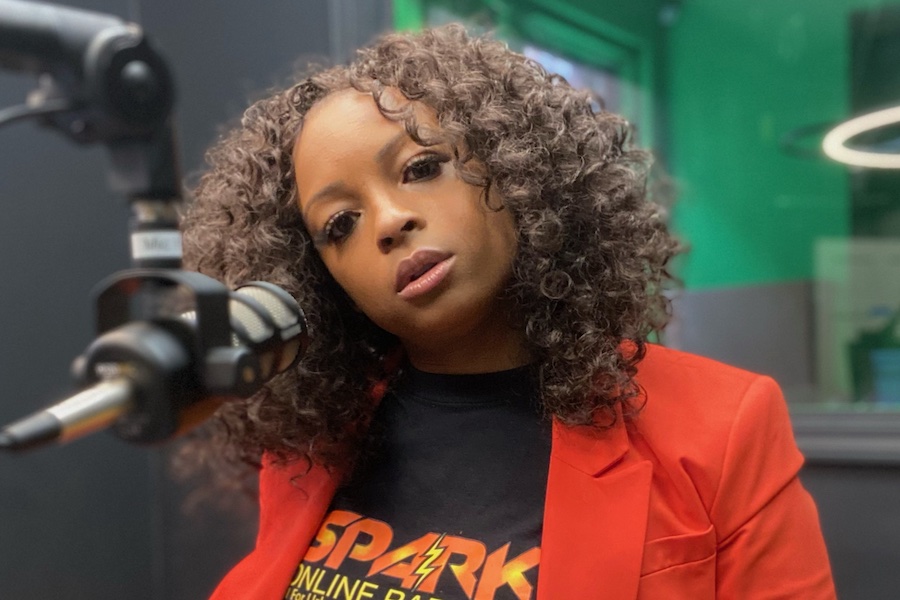 Danielle Johnson at the booth in the Spark FM studio. Image provided

When Danielle Johnson signed onto Zoom for an interview late one recent night, the online DJ was still excited, and just a bit stressed—she’d come from moderating the Q&A portion of a “Women for Wu” fundraiser for city councilor Michelle Wu’s mayoral campaign. Although Johnson has no fear of public speaking thanks to her day job running the all-digital radio station Spark FM, playing a key role for one of the city’s leading mayoral candidates was an unexpected opportunity.

“She called me up randomly on the phone like 2 weeks ago asking if I would be able to join her fundraiser ‘Women for Wu,’ and I had no idea that she had my number,” says Johnson, sporting cherry red glasses, a nod to her DJ name, Ms. Hotsauce.

But the prominent gig was emblematic of the exponential rise of Johnson and the platform she created. Spark FM, an all digital radio, went from a January 2020 Kickstarter campaign to an April 2020 reality and has only continued to rise in the months since. It also stands in stark contrast to the generally very white radio ownership in the Boston area—Johnson’s identity as a Black woman makes her very much the outlier.

Now, just past the one-year mark for the station, Spark FM has grown into one of the region’s best sources for urban and Caribbean music, with more than 30 thousand monthly listeners.

For Johnson, a DJ with more than ten years of radio experience, launching her own station was a way to create her own opportunity after finding the door closed at a number of established Boston stations. The initial crowdfunding campaign proved remarkably successful, exceeding its planned fundraising goal by $5,000. The Kickstarter campaign pledged to “get more urban voices on the radio,” and cater to an “under-served and under-represented community,” a mission that clearly resonated with its backers. The success of the campaign, which meant Johnson’s seed funding came right from the very audience she meant to serve, signaled to her that there was a place in the city for her vision.

“I’ve been embraced really well by the city, and by the community, and by other communities at large,” says Johnson.

Despite the success of the Kickstarter campaign, Spark FM still faced hurdles in its early days; namely, a global pandemic. Shortly after the fundraising campaign ended, Johnson and Spark acquired a physical recording studio. But just three days after finally establishing the brick-and-mortar location in Hyde Park, in mid-March, the pandemic lockdown hit Boston and the space was shut down. 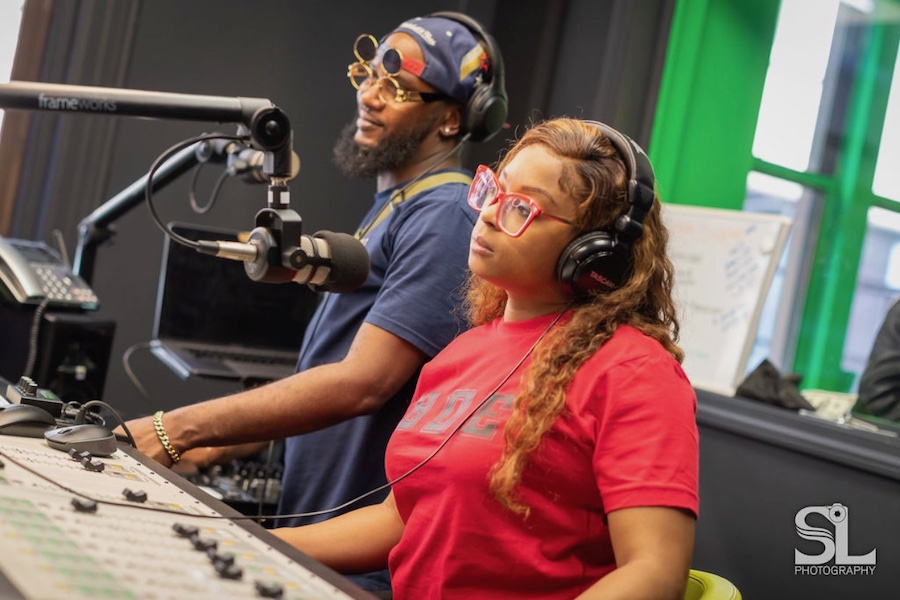 Spark’s five DJs showed resilience, though, and got to work creating in-home-studios, says Johnson. While a big in-person launch event had been planned, Johnson and her team decided to settle for a Zoom event in the interest of getting the project off the ground. On April 20, 2020, the station went live with five employees and 40 volunteers, with Johnson herself hosting her trademark podcast, “Henny ‘N Hotwings.” Since then, it has expanded to more than 40 DJs and hosts.

DJ Rosco, or Charles James, is a jockey Johnson knows well. He was involved with Spark FM from the very beginning, before they even launched the Kickstarter. James says that he was on board the second Sauce, as friends call her, passed along the idea. He also says that Spark FM is something that the city and region have needed for a while.

“There’s a need for something fresh in the city when it comes to radio, music, arts, all that,” he says. Spark, for him, is the place to provide that freshness. The newest dancehall, the newest Caribbean, the newest hip-hop. For him, the station is a way to musically move Boston out of the ’90s.

But the online station is about more than music, say Johnson and James. They dedicate their ad space to allowing small businesses affordable marketing, and their website has a community resources section packed with helpful information for local entrepreneurs and covid resources, including details about vaccine eligibility and a list of websites for entrepreneurs to find grants and funding.

Spark FM doesn’t just play music, either—it broadcasts a range of other programs, some journalistic, some entertainment, and all dedicated to covering underserved communities, both geographic and demographic.

One of those radio programs is “Wake up with Tayla André,” a show dedicated to “unorthodox conversations” with public figures such as Ayanna Pressley and Rachael Rollins about a range of subjects, from politics, to race, to the city of Boston itself. André has also been involved with Spark FM from the jump.

André says that outlets like Spark are needed to push radio in the right direction, which has been baked into the conception of the company from the start. Johnson founded the station after a job search in local radio turned up dry, an experience that left her feeling that the places she was applying, as well as the two local radio stations she had previously worked at, didn’t have space for a Black woman. And that’s exactly why André thinks that change needs to happen through new startups like Spark, rather than hoping that established institutions will change and embrace diversity.

“Technology has created our own lane,” says André. “We don’t need the industry.”

New businesses, like Spark, can be created to fill holes in markets and provide a much-needed update to contemporary radio, André says. “Our coverage is authentic. It’s down to earth,” she explains. “You’re not going to get it anywhere else except from Spark.”

After its runaway success in Boston, Johnson is hoping to take the concept beyond the Bay State to other cities. Atlanta, Philadelphia, North Carolina, and Cleveland are cities Johnson is currently considering, but the dream is to have one in “every city.” Johnson has big goals for the company: “I call myself a modern-day Cathy Hughes.”

But while thoughts of expansion are exciting, Johnson is just happy to have her idea off the ground. It was a new idea launched in a stressful time, and she’s grateful for all the work put in by her team. Looking to the future, she and the Spark FM team hope to work more with the community that helped them onto their feet.

“Now that we have a legit Black media station here, you know, we’re listening,” says Johnson. “We’re hearing what they have to say, and we’ll do our best to really implement the ideas that they want to see and want to hear.”