A Brief History of Bennifer Sightings in Boston

Will Ben Affleck and Jennifer Lopez bless us all with their presence this year like they did in the early aughts? 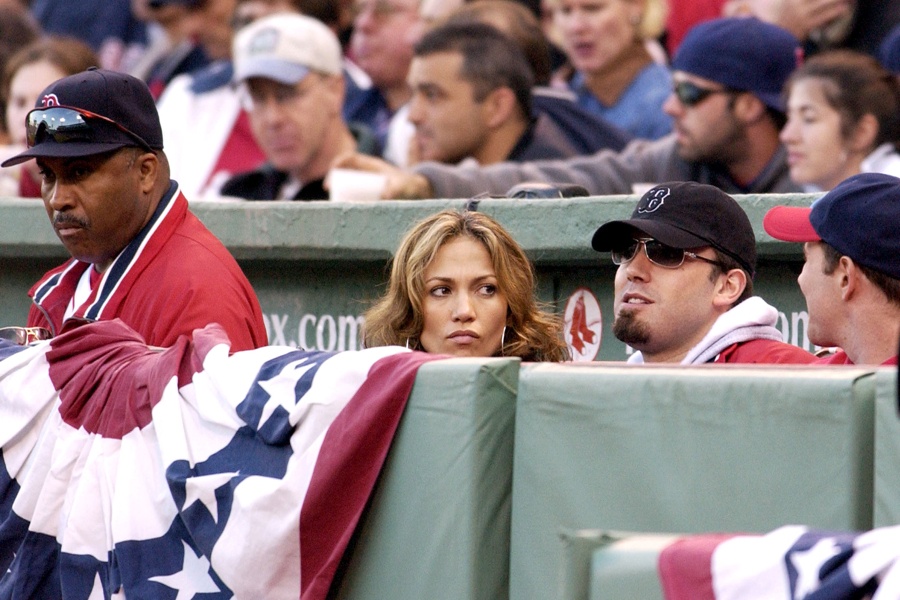 Boston loves a celeb sighting. We get quite a few of them these days, given the movie industry’s obsession with filming here. You no doubt saw those pics of Jon Hamm beaming next to a pair of little dogs recently. But there is no hotter commodity in Hollywood right now than Ben Affleck and Jennifer Lopez, who have recently brought Bennifer mania back from the dead, and attracted armadas of paparazzi who follow their every move, be it a flirty patio luncheon or butt-touching boat ride.

Mostly the sightings have gone down in exotic locales or at home in L.A. But it’s only a matter of time before the happy couple is spotted around these parts, given Affleck’s deep ties to his hometown of Cambridge (he, according to Lopez, proposed to her in his childhood home in the city) and his famed love of the Sox.

They certainly were during their first try at romance back in the early 2000s, popping up in Massachusetts sometimes in the unlikeliest of places. So until the next time they’re seen once again canoodling in the dugout at Fenway, or grabbing dinner in the Back Bay, here is a brief history of Ben and Jen sightings in the area from two short decades ago:

September, 2002: At a Wareham Coffee Shop

Bennifer couldn’t go anywhere without drawing attention to themselves back in 2002, and that includes a sleepy coffee shop in Wareham’s Onset Village. The couple was reportedly in town visiting family when they swung by the Cup of the Bay, which closed in 2009, and encountered some starstruck—and slightly confused—locals inside. Per a Globe report at the time: “When asked by a customer why they’d come to Onset ‘where there is nothing going on,’ Lopez reportedly smiled and said ‘That’s exactly why we’re here.'”

Details were sparse, but family man Affleck was apparently back in town two months later celebrating his mom’s birthday at an undisclosed location in Boston. Earlier, per the Globe, the couple had been spotted “tooling around” Cambridge.

The next Bennifer sighting apparently came to us on Christmas Eve of 2002, when the Boston Globe reported that the couple was allegedly spotted at, of all places, Micro Center electronics store in Cambridge (Affleck’s parents apparently lived nearby). Scribe Farah Stockman shared news of this holiday miracle in the form of a poem, set to the meter of “The Night Before Christmas,” alongside security camera footage captured at the store:

‘Twas the day before Christmas and throughout every store

Last-minute shoppers were elbowing their way toward the door

When, at Cambridge Micro Center, who should they see

But Jennifer Lopez and Ben Affleck, purchasing an HP Pavilion 753

April, 2003: While House Hunting in the Public Eye

The couple piqued Massachusetts’ interest in 2003 when they were reported to be looking for a home together somewhere in the Commonwealth, perhaps in Boston or Cambridge, or maybe Cohasset, where they were rumored to have done some house hunting. Then Us Weekly had Scituate in a tizzy when it reported that Ben and Jen had honed in on buying a $3 mansion not in the big city, but tucked inside that seaside town. Scituate locals were happy to gab about the possibilities of such starpower landing in their midst. But in an interview with a Globe reporter, Nor’easter Surf Shop owner Mark Keup offered up this brutal drive-by on Affleck: “I wish it was Matt Damon. He’s a better actor.” Alas, they did not purchase the home. But it was fun for the beach bums to imagine nevertheless.

The rumor mill was churning one summer Saturday afternoon on Newbury Street with reports that Bennifer had been seen on Newbury Street. As it turns out, though, people had merely seen a ruckus in the shopping district and jumped to conclusions about the disturbance. That’s how large Bennifer loomed in the Boston consciousness at that point. The actual VIP responsible for the hubbub? Then-Second Lady Lynne Cheney.

Like any self-respecting Boston icon, Ben loves the Sox. And back in 2003 when the Sox faced the Yankees in the ALCS, the power couple was among the handful of boldfaced names (also: Katie Couric, Ed Markey, Robert Kraft, Joey McIntire, and Donny Wahlberg) in the crowd at Fenway to watch the action. They were, according to reports at the time, seated in John Henry’s dugout seats. Ben had, according to photographic evidence, a wildly 2003 chin beard on his face. The Sox lost. This was not, for the record, the first time J.Lo joined Affleck at a Sox game. The happy couple was also spotted in April of that year cheering for the team in Anaheim, where she reportedly stuck around for five extra innings and even autographed baseballs for Boston players.

When the holidays rolled around again, the couple reportedly surprised guests at a private party held in the basement of the former Charley’s on Newbury Street one night, per the Globe, before they headed to dinner at L’Espalier. The paper’s Names briefing says they wandered into the celebration by mistake, of course drew abundant attention, then “talked with staff and fans” before slipping out. A month later, they split up. It would be the last time they were seen arm-in-arm in Boston. Could there be more sightings to come?