After months of pandemic-related ups and downs, new Encore president Jenny Holaday is betting she and her team can bring the crowds to the region’s only casino. Will the odds be in her favor? 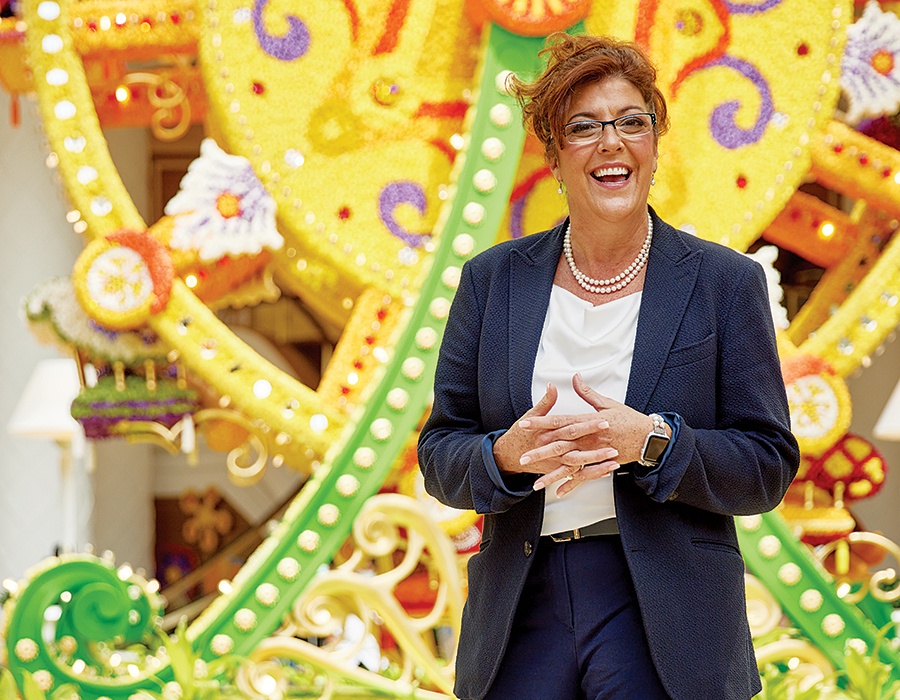 That smashing sound you heard coming from the Encore Boston Harbor last month wasn’t one of the Murano glass chandeliers falling on the floor. It was the glass ceiling shattering when Jenny Holaday became the first female head of a casino in Massachusetts. Holaday, who’s lived in so many different places that she sighs when asked where she’s originally from, has held positions at Harrah’s Entertainment and Mandalay Resort Group. Now, as the president of Encore, the longtime gaming exec oversees all aspects of the casino, including finances, marketing, sales, and a staff of about 3,000 employees. She sat down with us in one of the private gaming suites to talk about good-luck charms, tough customers, and why the casino industry is still the best game in town.

Absolutely. I love to gamble, and it’s quite uncommon in my business. A lot of casino executives don’t, which I find fascinating. I love it. My favorite thing to play is the penny slots, but obviously I can’t play here. I do think it’s something more casino executives should do, because it really helps you understand the customer experience, what’s new and exciting.

What’s the biggest line item in a casino’s budget?

In terms of product development, slot machines are one of the most expensive things we buy.

Who is your target market?

What three adjectives would you use to describe your audience?

Greater Boston area. There. That’s it.

What distinguishes Encore from a casino in Las Vegas, or anywhere else?

If I’m not interested in gambling, why should I come here?

The number one reason to come here is to escape. Whether you like to gamble or not, it’s just a wonderful escape for the over-35 set, although plenty of under-35-year-olds come here. The fastest way for someone my age to feel irrelevant is to go to a bar or a club. But I can come here, sit down for a drink at Rare, walk through and maybe drop a couple of pennies in a slot machine, stop by the food truck and get a great slice of pizza, maybe watch people play the craps table, and hang out in Mystique, our lounge. So I think we create the social opportunity to escape your everyday life in a way that’s age-appropriate. Like I said, young people love it, too. But I feel like we’re especially relevant for older people.

Is it true that casinos purposefully block out natural light and pump in oxygen so that customers don’t know what time it is and stay awake?

Those are two huge myths. The constraint with natural light at our casino is logistical: We need to have an array of security cameras, and the way our gaming floor is designed, it’s surrounded by dining options. As for oxygen? No, we don’t do that.

Are there any laws particular to Massachusetts that are a hindrance to operating a casino?

No. I think that’s the beauty of getting into the game later. Regional gaming really started expanding in the late ’90s, so by now there are so many experienced regulators and operators, we don’t have to reinvent the wheel.

What’s the closest to true odds that you can get in an American casino?

The game with the best odds for the player is craps, but it’s a hard game to learn, so if you don’t know how to play it, your odds change dramatically. I would say that after that, the next would be blackjack. A great basic strategy player on blackjack can do very well.

How often do you have confrontations with customers?

All the time. Casinos attract all kinds of different characters. Whether it’s because they’re angry at someone, or something happened at home that brought them here, that can make them belligerent or difficult to interact with. We actually just introduced a guest code of conduct a few months ago. Just as our employees are expected to treat you a certain way, guests are expected to behave in a certain way. You want to create a really nice, comfortable environment for everybody, and when someone goes off the rails, it makes everybody uncomfortable. So whenever that happens, we have to intervene. We pull the customer aside to see if there’s anything we can do to improve their outlook on the situation, and if not, they’ll be asked to leave.

What’s the strangest thing you’ve ever seen somebody do for luck?

Probably the Beanie Babies thing. There’s a little natural shelf on slot machines, and every once in a while, you’ll see someone who has them all lined up like little charms—five, six, or eight of them.

How about blowing on the dice in craps? 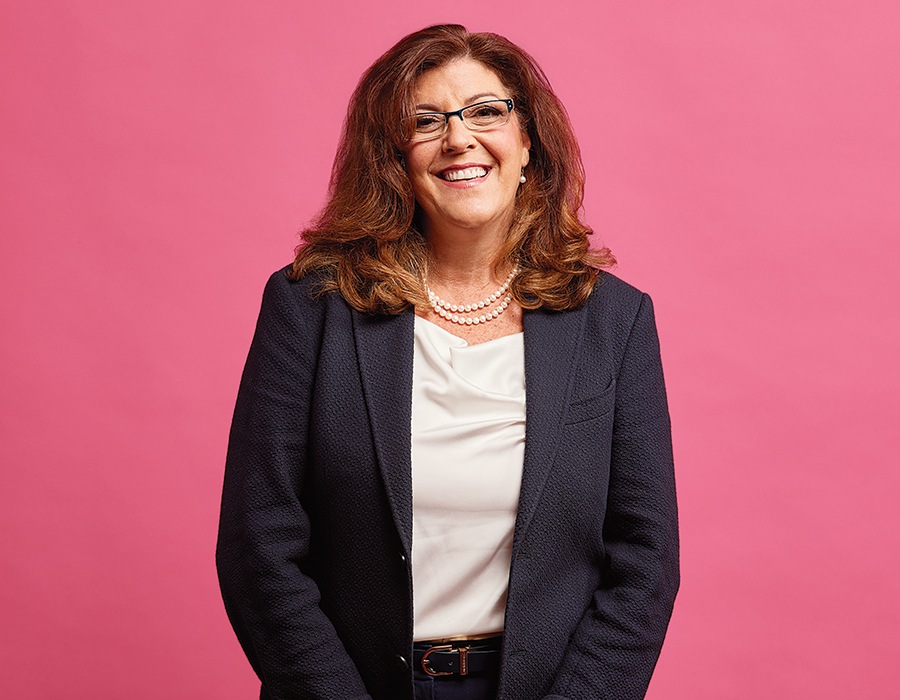 When the Wynn Las Vegas first opened, I remember feeling that way there. The layout of the hotel rooms, in particular, blew me away. This company has its own design division, and they choose all the original artwork on the walls, the Murano glass chandeliers, all of it. And I’ll tell you: This place also hit me when I first saw it. I’ve been in the regional game for a lot of years; I left Nevada in 2001. But when I first walked into the Boston Encore for my interview, I snuck off onto a little patio and called my son, and I said, “I don’t think I’m fancy enough for here.” This place is fancy. We even have little stools to hold your purse so it doesn’t sit on the ground.

Do you think the gaming industry is intrinsically or historically misogynistic?

No. I think that it might be mythically misogynistic, and a lot of that goes back to the Rat Pack imagery we all remember from the ’50s. But I get asked that question a lot, because I’m a woman in what’s typically been a male-dominated industry, and I’ve never once felt held back, minimized, compromised, or humored because of my gender. I’ve always felt judged on my merits, which is the revenue, quite frankly, that I drive. But I understand why the public might think that.

Your mother was in the business, too. Was she a role model?

Oh, yeah. After my parents got divorced, my mom had to work, and I remember, when I was maybe six or eight, she had all her friends over, and they were sitting around our dining room table, talking about their careers, and how much fun they were having. My mom started out ringing up the diners in a headliner room in Reno, and eventually she was vice president of operations for a really beautiful property in Lake Tahoe. She was in the business for 40 years. So I saw that women could do it.

You’re the first woman to run a casino in Massachusetts. What about other states?

There have been casinos run by women in Las Vegas, Atlantic City, and other places for years, but here’s where Massachusetts gets props. It didn’t take very long. And what I like to say is that I might be the first, but I certainly will not be the last.

What’s your favorite casino movie of all time?

Oh, my gosh, what a great question! Probably Casino, with Robert De Niro. And my favorite scene is when he gets upset that some muffins have more blueberries than others. He goes to tell the chef to put an equal amount in every muffin, no matter how long it takes. I can so appreciate that scene. Somebody watching it might think he’s an absolute lunatic, but that’s the level of detail that you pay attention to in this business.

What’s the hardest part of your job?
It’s also the most rewarding part of it, but the talent development. It’s fun, quite frankly, but difficult. We have so many great managers and staff, and everybody’s ambitious. Everybody wants to get ahead. Everybody wants to learn. And there’s not enough of you to do all of it. So managing your bandwidth—so you can make sure you’re giving as much as possible to those with the highest potential, while making sure you’re available to everybody—is challenging.

Do employees ever try to get away with stealing from the casino?

[Laughs.] Only on days ending in the letter “y.”

Who could possibly think they could get away with it?

The dumbest ones. Because everywhere you go in a casino, there are cameras. Everywhere, everywhere. There’s nothing you could ever do that’s off camera. And it’s funny how people forget that. But it’s easier to stop it in a casino than in other hospitality operations, because our regulatory requirements call for such incredible surveillance. There’s hardly anything that can go down that we can’t properly identify, diagnose, and fix.

Is there anything you’d care to say about the whole controversy surrounding Steve Wynn?

Well, that was all before my time, but I did watch it from a distance, and when it happened, it was obviously news throughout the industry. I think that the company handled it very well. I mean, Steve Wynn happened at the same time as Harvey Weinstein and Kevin Spacey, and it was just one more name in a sea of names, but it was in an industry that I understood. I thought the way Wynn handled it was swift. He sold his shares. Our CEO was immediately elevated. They didn’t waste a minute, from my perspective. So, again, I don’t know what it was like on the inside, but that’s what I saw from the outside, and it was impressive.

It’s funny how people forget about the cameras. A lot of people think casinos are just printing money, so it’s the perfect place to have a slip and fall. You wouldn’t believe the number of hilarious, well-choreographed, under-the-watchful-eye-of-a-camera slips and falls I have seen over the course of my career. It just happened a couple of weeks ago, involving a vehicle. People are so funny. I’m gonna fall, and then sue, and I’m gonna make a whole bunch of money off the casino. Then you pull the tape and see exactly what happened. Over and over. It’s happened dozens of times, every place I’ve ever worked.

What do you do to relax?

I love to golf. It’s my most favorite thing to do in the whole wide world, and I need to do more of it.

Exactly how much money goes in and out of this building in a day?

[Laughs.] I am probably not at liberty to answer that question.

Is there any other business you would leave the gaming industry for?

I have left, to go into business for myself. I’ve actually done that twice. But this keeps luring me back. There’s no more energizing, every-day-is-different kind of business. It’s so much fun. I’ll be in this industry until I retire. 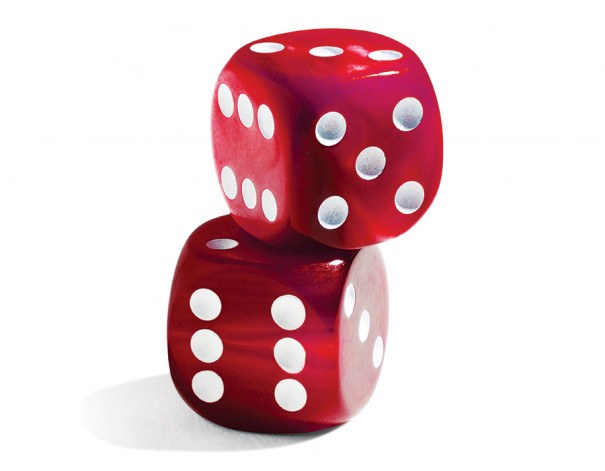 The casino business in the Bay State might be fun, but it isn’t always easy.

25
Percentage of gaming revenue the state takes monthly from resort-casinos.

426.5 million
Total gaming revenue, in dollars, Massachusetts has collected from Plainridge Park Casino—our only slots parlor—since it opened in 2015.

1
Number of resort-casinos left to be built in the state (there’s a legal limit of three, not counting ones on tribal lands).

300
Percent increase in crime around MGM Springfield in the four months after it opened.

0
Number of poker tables in the state. (Encore and MGM shut them down during COVID, and it’s unclear if they’ll reopen.)