If You Keep Turning Right, Can You Make It Out of Any Corn Maze?

The secret to navigating any of the dozens of corn mazes sprawling across New England might not be the method at all— but the execution. 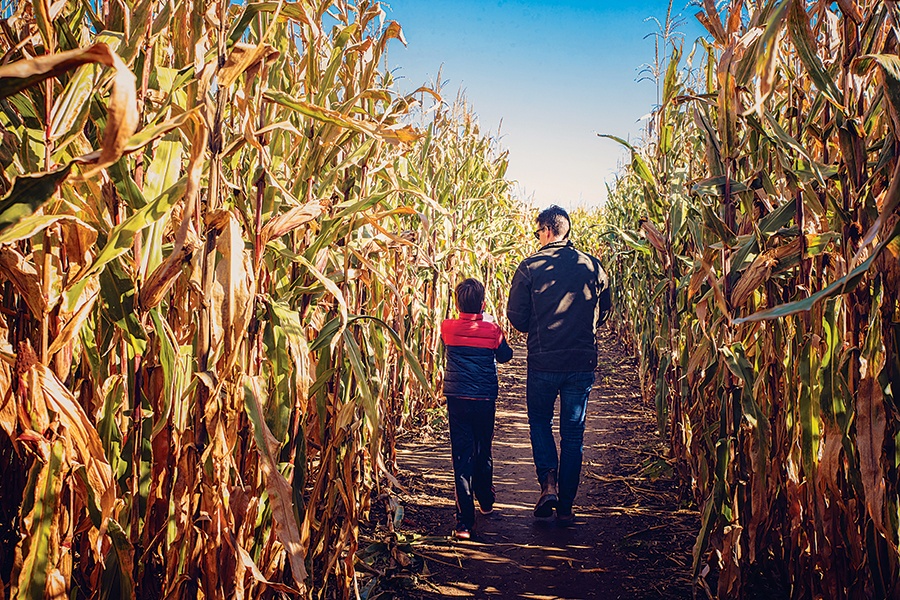 I’m psyched for another New England fall and all of the outdoor activities that go along with it, especially the corn mazes that seem to be at farms all over the place. Before I get lost again this year, I was wondering if the old saying is true—that if you keep turning right, you’ll always find your way out? —V.A., Dedham

I love corn mazes as well, V.A.—in fact, each fall when we’re seeing the grandparents up in Midcoast Maine, we make sure to visit Beth’s Farm Market, where we take the kids on a hayride and a journey into labyrinthine cornfields. It feels like we’re tapping into a New England ritual that has thrilled flannel-clad families like ours for generations. But as I started researching your question, I found that ye olde corn mazes as we know them really only date back to the 1980s. That seemed odd, because we all certainly feel that frisson of tradition that comes with getting enjoyably lost in the crisp autumn air and pondering the best way out.

Soon after that surprising detour, I discovered that the old right-turn (or “wall-follower”) method indeed works, so long as the maze is “simply connected,” which means that all of the walls are attached to one another and then to the outer border. You may hit some dead ends, but you’ll always find the exit. Many of today’s mazes, however, can no longer be considered “simple,” as they use tricks like large corn islands that can send you in endless circles. When I spoke to Larry Davis, co-owner of Davis Mega Maze BBQ & Brews in Sterling, he told me that his massive 3-mile labyrinth has even more complex features, including double-decker and multipoint bridges that can easily lead you astray.

As he has each year for 20-plus years, Davis and his team spent nearly a year conceiving a theme (this fall’s is “Where’s Waldo?”) and designing a confounding puzzle, which was graphed via computer onto an image of his 8-acre cornfield and cut using a GPS-equipped tractor. The end result is the Mega Maze, open the first four weekends of October, where you can spend hours turning yourself around amid aisles of kernels and husks. So if the right-turn method doesn’t work, what’s Davis’s strategy? “I strongly recommend bringing a child between the ages of nine and 14,” he says. “Every year I see groups of doctors and physicists and other learned people stopped at a four-way intersection, where they ponder the way forward. But kids will always be the first to finish, because if a path is wrong, they come right back out and try another. They just do it.”