Can Ping Pong Be Sexy? SPIN Boston Gives That Concept a Try

We tried out the city's newest paddles-and-cocktails bar in Fort Point, to get a look for ourselves. 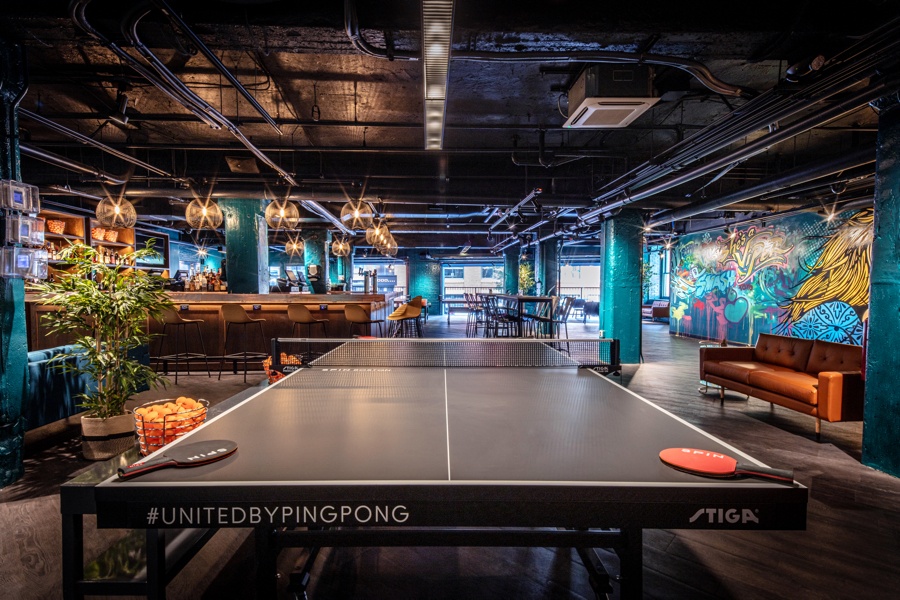 Courtesy photo by Artists for Humanity

Can ping pong be sexy?

That was the question the Boston team wrestled with on Tuesday night as we made our way down to SPIN, the gigantic new Boston outpost of a trendy ping pong and cocktail chain that has just debuted in Fort Point.

Pool, we agreed, clearly is. Here is a game that has a longstanding association with mysteriousness, intrigue, and iconic movie scenes, like Tom Cruise in The Color of Money. But ping pong? The sport with a silly onomatopoeia for a name, the one that Forrest Gump plays?

SPIN is, apparently, itself interested in answering this question. As we walk in the door we’re greeted by a floor-to-ceiling portrait of a nude woman posing with strategically placed paddles, which is bordered by a giant golden frame, drawn in spray paint. The lighting is bright enough to play ping pong, naturally, but also moody. Stylish graffiti—of edgily drawn cartoon characters, pouty models, a drippy heart in pink neon—is splashed on the walls, much of it the handiwork of popular Boston muralist Blind Fox, whose work you can also find at Lolita and Mariel, sexy establishments both. In a nod to the latest trend in Instagram-able experiences, there is of course a bathtub to take your picture in, above which the words “Naked Ping Pong” have been written. The gender-neutral bathroom is decorated, loudly, with reflective silver wallpaper dotted with bright-red cherries. 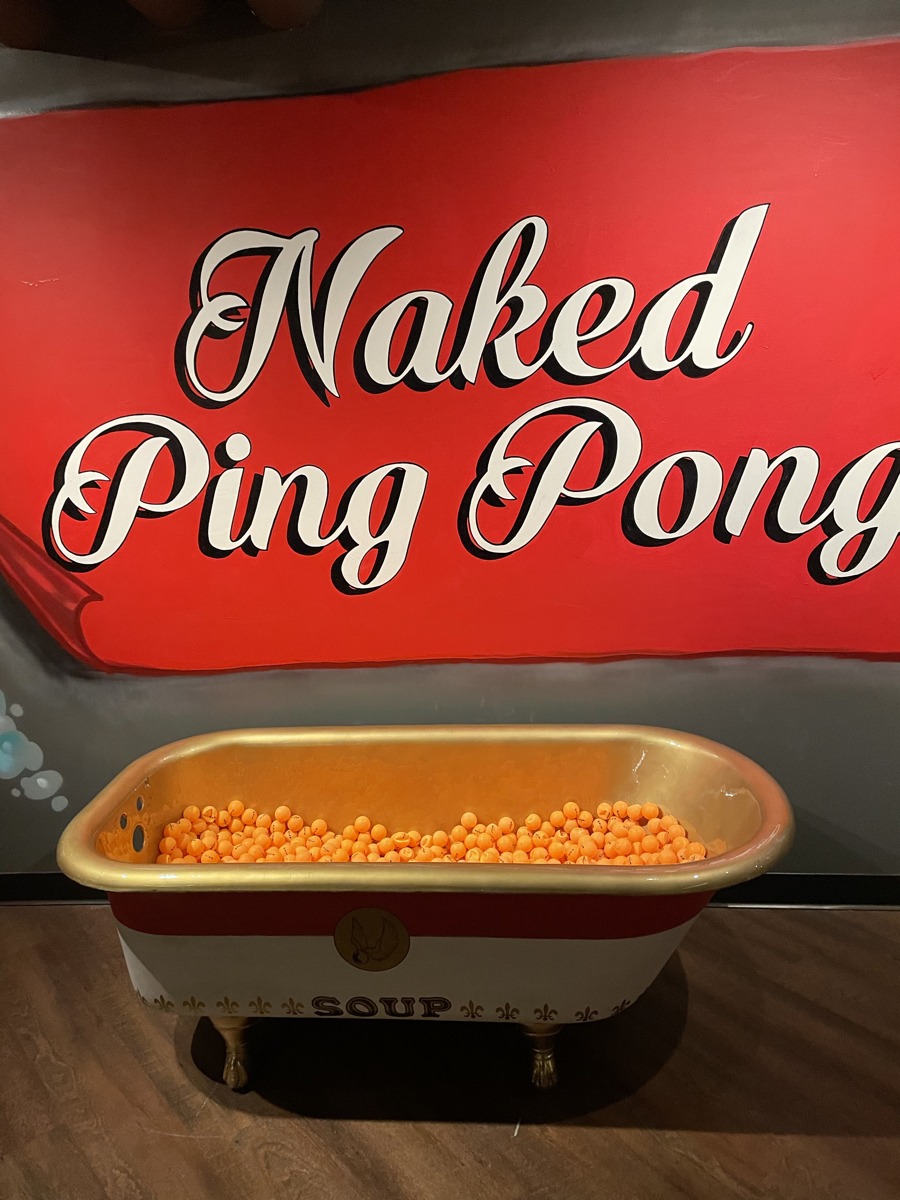 Much of the clientele at this early hour (a little after 6 p.m.) is made up of dudes, mostly due to the fact that a very male tech company has booked one of SPIN’s large function rooms. But a couple of the venue’s 14 Olympic-grade ping pong tables are ringed by mixed-gender groups, including what appears to be a double date.

So that’s the vibe. Onto the pong.

As we sidle up to our table for our one-hour reservation, it becomes clear that a critical stroke of brilliance at the heart of the place’s business model is its ball retrieval policy. By this I mean, as our host explains to us, you do not have to pick up stray ping pong balls yourself. In fact, you’re discouraged from doing so. Instead, when balls whizz past and skitter across the concrete floor, you simply leave them alone, and dig a fresh ball out of one of two heaping metal baskets placed next to each table. It’s a novel approach to the ping pong bar concept, one that SPIN has perfected at its series of similar concerns in seven cities, including two in New York.

The execution is as impressive as the idea. They accomplish the task of scooping balls for you with a device that they appear to have invented themselves. From what I can tell, it’s essentially a pool skimmer with the face of a tennis racket attached at its end, the threads of which have been replaced with some kind of fish netting, designed so that lowering the contraption on top of balls sucks them up and traps them inside (it works sort of the way a lobster trap does, if you’re familiar). A staff member walks around picking up the orange orbs that accumulate on the floor, like a life-size pac man, and then every so often comes by to dump big sacks of them back into the baskets.

It can’t be overstated what a game-changer (literally) this policy is. The first couple rounds I found myself chasing after balls, doing quick deep-knee bends to keep them from bounding further away—like a peasant!—and forgetting that, luxuriously, the loose ball ricocheting this way and that was not my problem. Gone are the days of scouring basements and reaching under couches, which are usually par for the course in most ping pong matches. 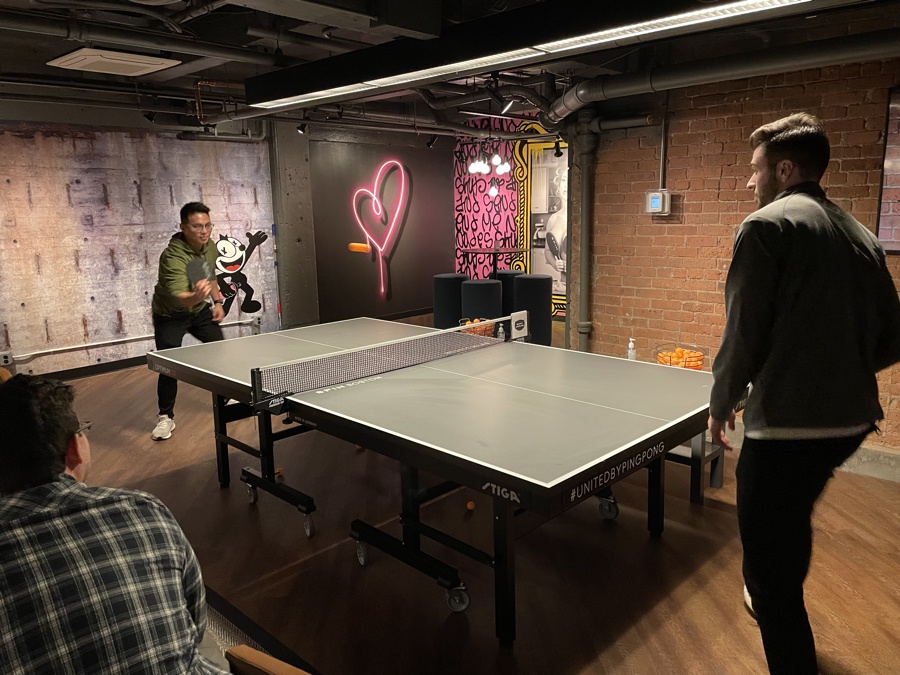 Due to its genius ball retrieval policy, SPIN makes sure that your time slot will be full of all the ping you can pong. Photo by Spencer Buell

The result is that, due to all the time you aren’t spending chasing balls, you can play a lot more ping pong. And given the $39 an hour price tag, achieving a high rate of ping-pong-per-minute means you get a lot more bang for your buck. The speed is so much faster that, for the first time I think ever, I found myself working up a sweat while swinging a ping pong paddle. I am also, I should probably get around to mentioning, pretty bad at ping pong. So this setup allowed me to lose one game against my much more coordinated opponent 21-3 in approximately 5 minutes.

What this also does, though, is limit the number of potential flirtatious encounters with other tables that having to chase after balls would create. These are the sacrifices you make for convenience’s sake.

SPIN emerges as the latest in a series of gaming-and-cocktail joints to open in the Boston area, among them adult video game emporiums A4cade in Central Square and VERSUS in Downtown Crossing. The Seaport especially is emerging as a destination for this sort of thing. Already home to the glitzy Best of Boston-winning Kings bowling alley and a technology-enhanced darts bar called Flight Club, the neighborhood early next year will welcome Puttshack, a technology-enhanced indoor mini golf course with cocktails.

This is also not, you may recall, the first ping pong bar in Boston. Another one, called Blazing Paddles, opened up in the basement of Fenway’s Game On! back in 2014. But its general manager tells me Game On! has been pivoting away from the ping pong concept since reassessing during COVID lockdowns, and these days only wheels out the ping pong tables if they’re requested for private events. There is, in other words, a new sheriff in town, just as the old one was leaving the saloon.

So should you take a date to SPIN? I’ve been out of the game a long time now and can shed little light on this, but the three guys in their mid-20s with us say they would. For reasons I don’t understand, they say it’s more of a third date kind of place. People have picked up on this, it seems. As we play, a couple that absolutely radiates third-date energy are canoodling over post-pong cocktails at the nearby bar. On February 11, according to the bar’s events calendar, SPIN will host something called Love Pong. So make of that what you will.

As far as we were concerned, the hour we’d booked comes too quickly. So when the hostess slipped a 10 minute warning sign on our net, as some of us played and others nursed beers and a plate of nachos on the brown pleather couches in our corner of the bar, we decided to re-up our reservation at SPIN for another round. The night was young, and there was plenty more luxury pong to ping.

Is it sexy? I don’t know. But it is certifiably fun.