First Look: What to Expect at the Brand-New Roadrunner Music Venue 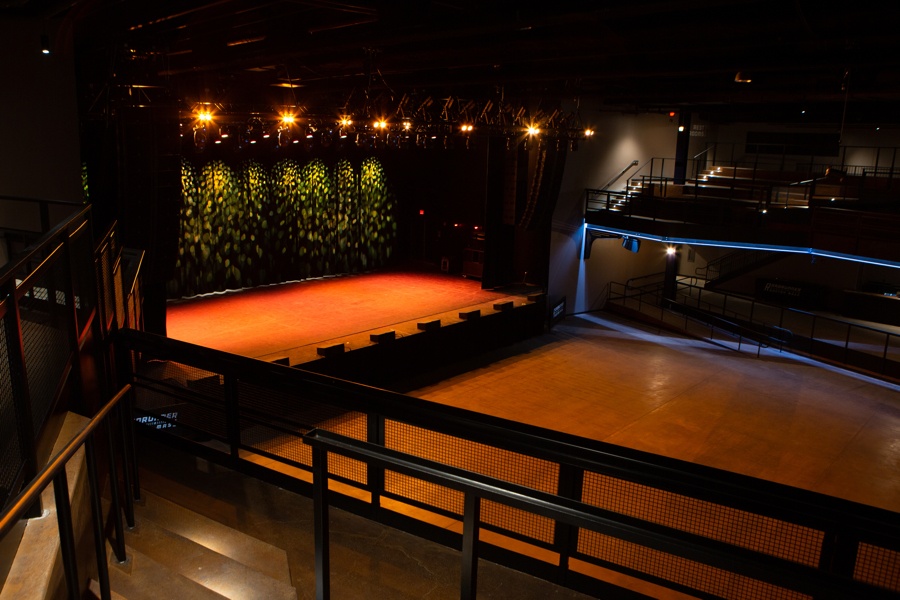 The view from the upper mezzanine. Photo by Ben Stas/Noise Floor

It’s finally here. The highly anticipated opening of Roadrunner, the cavernous new live music venue in Boston Landing, arrives on Tuesday, March 15. It’s the third venue under the auspices of Bowery Presents, which operates the 525-capacity Sinclair and runs booking for the 1,200-capacity Royale.

But with a capacity of 3,500, this is the biggest Bowery project in this area to date. In fact, we’re told it’s the largest general-admission indoor venue in New England.

So what can you expect if you’ve already grabbed tickets to one of the several sold-out shows on the Roadrunner’s calendar this year? Bowery was nice enough to show us around this week. Here’s what we found:

If you’re a fan of the Sinclair (a longtime Boston magazine favorite), you’ll feel right at home. Roadrunner is basically a jumbo-sized version of the Harvard Square staple, with familiar touches like poured concrete flooring, jet-black wraparound balconies, and a minimalist design around the dance floor.

Roadrunner certainly feels like it’s the largest general admission indoor venue in New England, as the recessed dancefloor is massive (The fact that this space was originally intended to house the Celtics’ practice court makes perfect sense). It’s recessed, ringed by a standing-room area that’s a bit higher up, and surrounded by a trio of full-service bars.

An interesting feature is that the stage itself can expand in size, which means that for acts that don’t sell out, the venue can actually make itself smaller and more intimate than a 3,500-capacity venue might otherwise allow.

Upstairs, a wraparound mezzanine hangs over the dance floor. You’ll also find yet another bar and a hang-out area with views of the stage and a large window overlooking Guest Street (which, I’ll note, also peers directly into the Celtics’ training gym). Seating is very limited, but the upstairs area has some couches and stools. 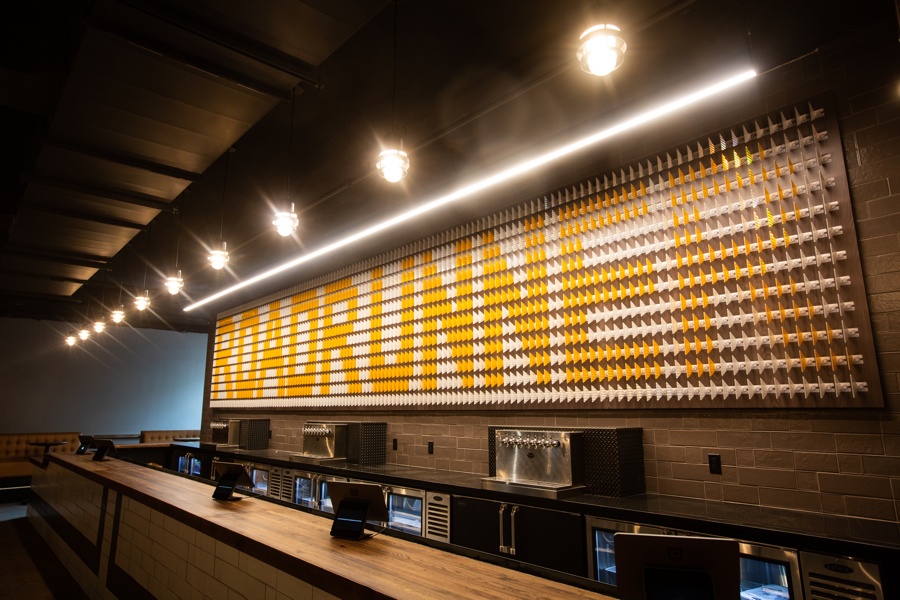 The upstairs bar is topped with a 26-foot-long “Roadrunner” sign made of street reflectors. Photo by Ben Stas/Noise Floor

Off in the wings are a pair of premium seating areas that overlook the stage. The vast majority of the venue, including most of the upper mezzanine, is open to everyone with a general admission ticket. Whether these premium sections will be open for GA ticket holders or reserved for people who pay for the privilege will vary on a show-by-show basis.

Past a set of doors there’s a VIP area called the Guest Lounge (get it, because they’re on Guest Street?), with a separate bar, bathrooms, coat check, and VIP entrance, which is decorated with some big light-up lettering that reads “I’M IN LOVE WITH MASSACHUSETTS.”

Overall, we’re told that the venue was designed to optimize sight lines, so every spot in the house has an unobstructed view of the stage. 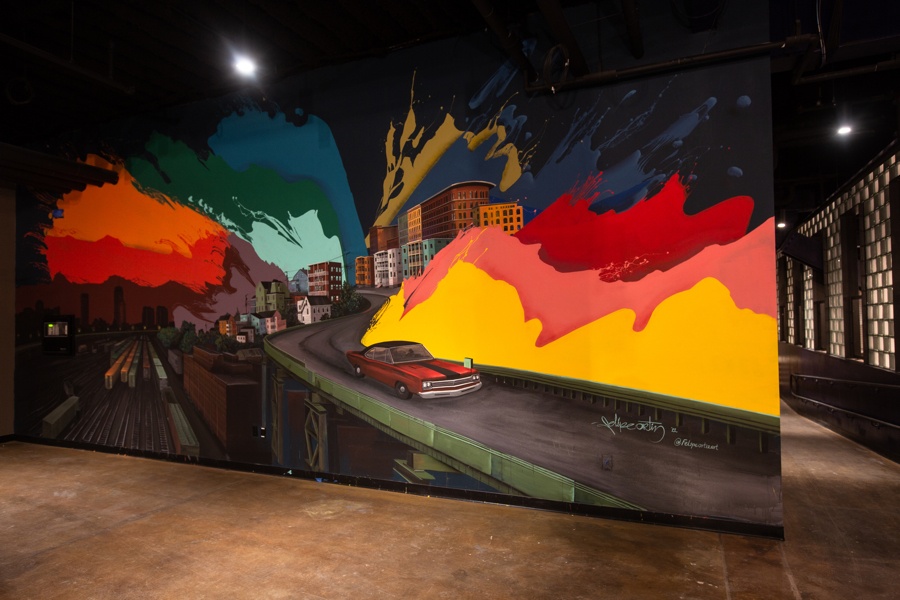 In the spots where they’ve allowed big pops of color, they really went all in on the local flair. At the front entrance, you’ll find a mural from Boston artist Felipe Ortiz, which features some odes to some city landmarks and its beloved triple-deckers, not to mention a vintage Plymouth Road Runner zipping down an elevated highway. Its color scheme is partially inspired by the album artwork for the Modern Lovers single for which the venue is named.

Backstage, visiting artists are greeted by some more locally-inspired art pieces, including these longboards painted with a tribute to Boston legend Donna Summer: 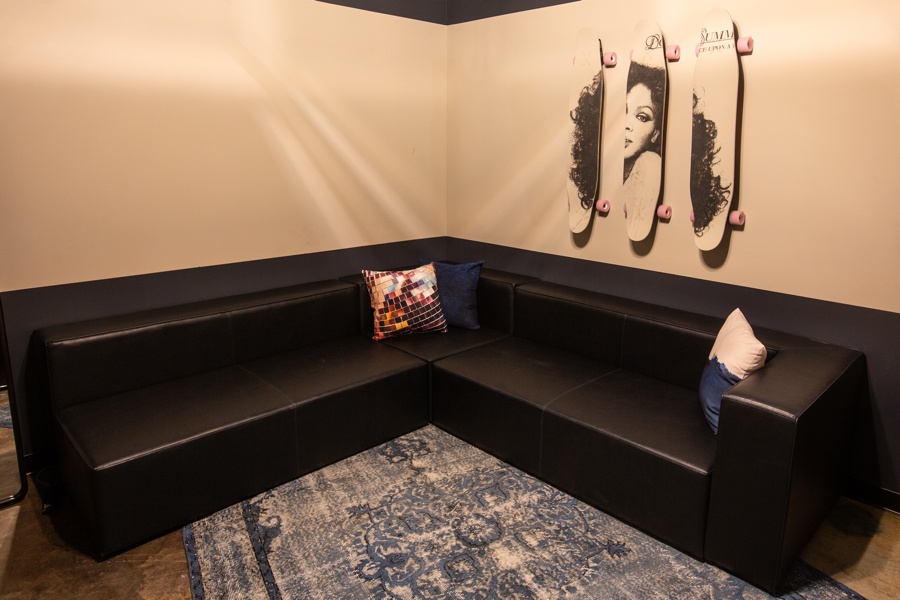 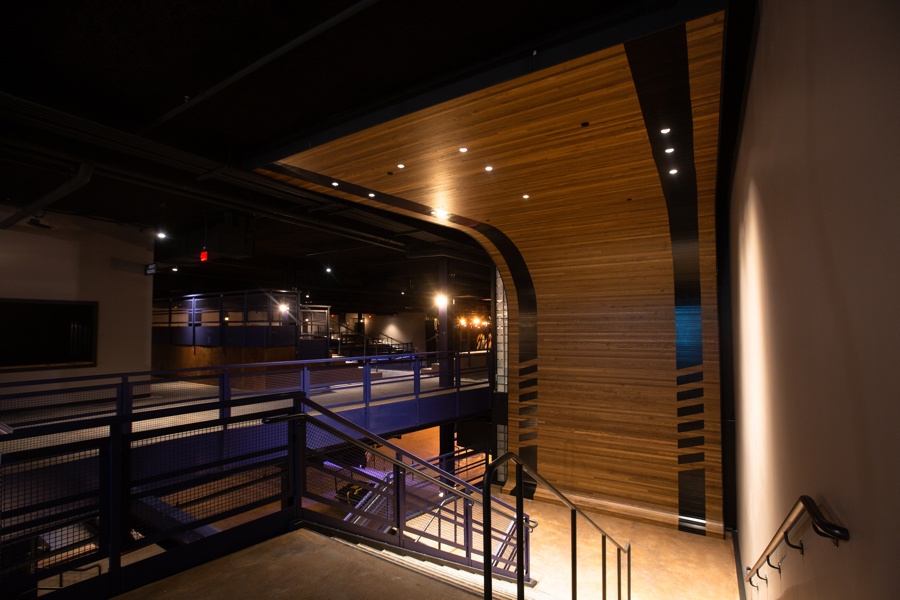 A skate boarding-inspired wall treatment by the stairwell. Photo by Ben Stas/Noise Floor

Elsewhere, look for subtle design touches, like the bar tops made to look like bleachers (a nod to the venue’s proximity to both the Celtics and Bruins practice facilities) and a skateboarding inspired swooping wooden structure by its main stairwell, which looks like a half pipe. For these, we can thank local firm studioTYAK, whose other projects include the Sinclair, Loretta’s Last Call, and Tradesman. 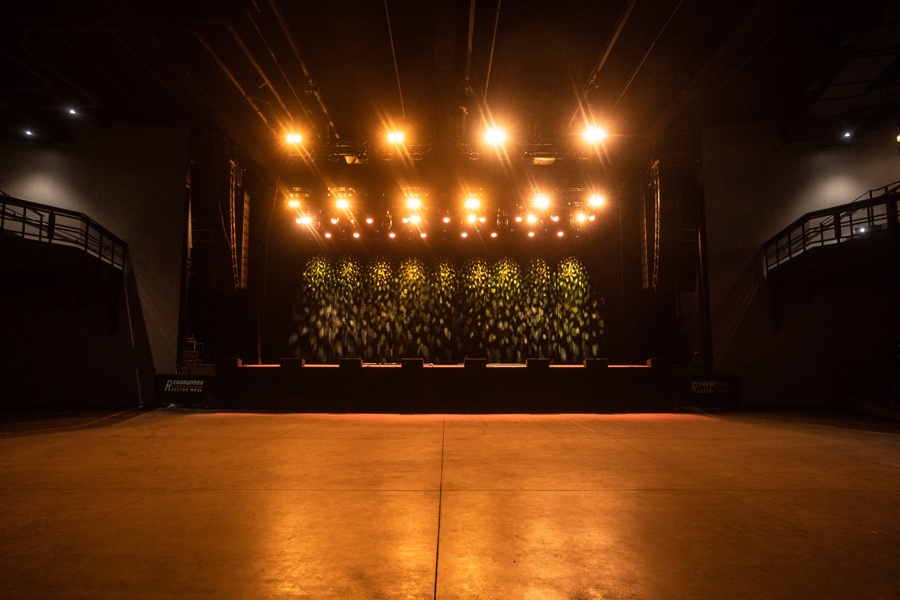 For the audiophiles out there, the speakers are the handiwork of French engineers L-Acoustics, and include a whopping 10 subwoofers on the floor. We’re told everything is top of the line, and that visitors should keep their eyes and ears peeled for strategically placed speakers hanging in the upper balconies, which allegedly ensure everything sounds crisp and clean even up in the rafters.

To kick things off, they’re coming out swinging talent-wise, with names like Khruangbin, Mitski, Bleachers, and Olivia Rodrigo set to take the stage this spring and summer. Boston acts feature prominently on the lineup, and include Dropkick Murphys, Cousin Stizz, and Converge.

Their first act ever will be the Grammy-winning bluegrass musician Billy Strings—who, as it happens, played Great Scott (which, before it closed, was in the Bowery family), then Sinclair, and then the Royale over the past few years as his audience has grown. Notably, Roadrunner will also host a four-night residency for LCD Soundsystem, which did a long run last year at the Bowery-owned venue Brooklyn Steel in New York.

You’ll have a couple options, travel-wise. First, there’s the Commuter Rail stop a few blocks away. Just be sure you time your trip properly, because trains only run about every hour, and there are not at present any plans for special concert-based trips. Additionally, the 57, 86, and 54 buses stop at Boston Landing. Or you can take the 15-ish minute walk to the B Line. Ubers and Lyfts pick up right outside the front door. If you drive, there are also several parking garages around Boston Landing.