After “The Slap,” Chris Rock Is Coming to Boston This Week

All eyes will be on the Wilbur as he makes what looks to be his first public appearance following the incident heard 'round the entertainment world. 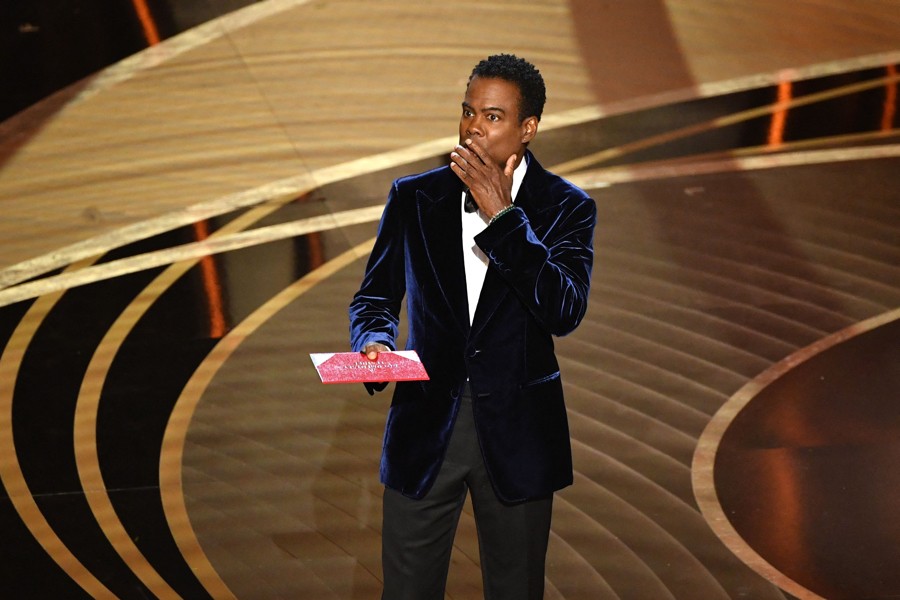 US actor Chris Rock speaks onstage during the 94th Oscars at the Dolby Theatre in Hollywood, California on March 27, 2022. (Photo by Robyn Beck / AFP) (Photo by ROBYN BECK/AFP via Getty Images)

What will Chris Rock have to say about The Incident? Boston comedy fans, it seems, will be among the first to know.

The comedian is slated to appear for a multi-night run of sold-out standup shows at the Wilbur this week, just days after he found himself on the receiving end of one of the more shocking moments in Oscars history. He’ll take the mic beginning Wednesday night, and perform six times through Friday.

As you’re assuredly already aware if you’ve been anywhere near an internet connection today, Rock was on stage delivering some one-liners at the Academy Awards Sunday night when he made a joke about Will Smith’s wife Jada Pinkett Smith that appeared to mock her recent hair loss due to alopecia. Smith then proceeded to storm onto the stage, slap Rock across the face, and then shout expletives at the comedian.

The slap has yielded no shortage of wild takes in the immediate aftermath, as commentators struggle to process the case of a tasteless joke followed swiftly by real physical violence on live television.

But what, if anything, Chris Rock himself will have to say about all this in Boston this week remains to be seen. As of Monday morning, Rock had yet to speak publicly about the incident. All we know so far is that, according to the Los Angeles Police Department, he declined to press charges against Smith, and that, according to Diddy, Smith and Rock made nice after the show.

But you can expect that the global entertainment press will be paying extremely close attention to whatever reaction he’s willing to share with fans from the Wilbur’s stage. There is certainly a lot to unpack here, given the headline-dominating altercation, and Smith’s teary reaction and quasi-apology in his Best Actor acceptance speech.

It was also not yet clear whether this suddenly extra anticipated appearance might drive up the cost of a seat at the show on the resale market. Tickets on Stubhub were scarce on Monday, and by noon were going for about $125 a pop.

This would already have been a big Oscars week for Massachusetts and its links to the goings on of Hollywood. CODA, the drama set in Gloucester and written and directed by Cambridge’s Sian Heder (who also took home an Oscar for her adapted screenplay), won Best Picture, making history as both the first film from a streamer (Apple TV+) and the first film with a mostly deaf cast to win that award. Co-star Troy Kotsur also made history as the first deaf male actor to win an award for the film.

But who could have seen this local connection coming?

As for whose opinion we do not need to wait to hear, yet another local has garnered lots of attention today: Rep. Ayanna Pressley, who tweeted then promptly deleted a full-throated “thank you” to Smith and a “shout out to all the husbands who defend their wives living with alopecia in the face of daily ignorance & insults.” Pressley has been public about her own alopecia-related hair loss, and followed up with a tweet thread this morning saying that she does not “endorse violence in any form,” and ending with “Team Jada always.”