A pair of COVID cancellations and a severe thunderstorm put a bit of a damper on an otherwise joyous comeback. 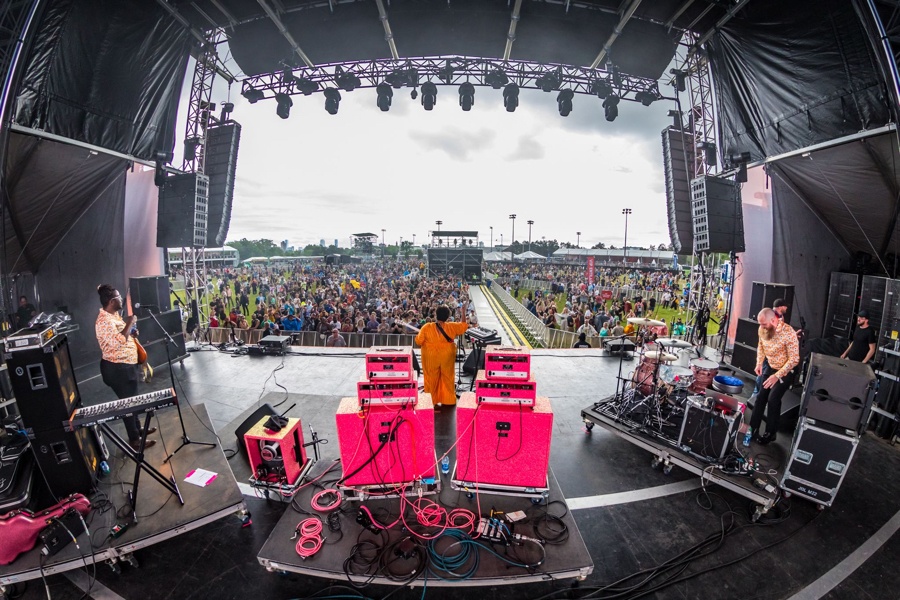 A bad break from Mother Nature and a pair of COVID-related cancellations put a bit of a damper on the three-day music festival as it makes its grand return to the Harvard Athletic Complex this year, but that’s live entertainment in the year 2022 for ya.

After a hot and hitch-free first day of the festival on Friday, things got a little wet for day two as a severe thunderstorm rolled through mid-afternoon, just as the festivities were getting started again. Boston Calling runs rain-or-shine—and the festival has certainly seen its fair share of the former over the years. But there’s only so much you can do when there’s lightning in the forecast at an outdoor event.

As menacing thunderclouds rolled in over the Harvard Athletic Complex, fans were told over the three stages’ loudspeakers a little after 3:30 p.m. that they needed to evacuate. Fans spilled out into Harvard Square, or into the empty Harvard Stadium building nearby, to take shelter. Security guards were also turning people away outside the entrance.

Some people, clearly, made the most of it.

Things are better next door at the hockey rink, where Boston Calling staff is handing out free water and a dance party has formed. pic.twitter.com/3BQu005mGh

The show resumed at 5:30 p.m., when the festival gates re-opened, and the music started up again at 6 p.m. But by the time fans got that good news, they got a bit of not good news when Australian rock band King Gizzard & the Lizard Wizard announced that they were dropping out of the show after a positive COVID case.

It was another bummer for Saturday ticket holders at the three-day festival, who learned yesterday that planned headliner The Strokes also had to back out due to a positive COVID case.

In their place, Nine Inch Nails stepped up to take the stage yet again on Saturday after headlining Friday night. Great news if you’re really into Nine Inch Nails (and this reporter can confirm they crushed it on Friday), but a buzzkill if you were really hoping to finally see “Reptilia” live.

Nine Inch Nails had already been a last-minute addition to the lineup, after original headliners Foo Fighters had to cancel after the tragic sudden death of drummer Taylor Hawkins.

In all, The Strokes canceling marked the fourth change at the top of the bill since the festival announced headliners back in 2020, and Red Hot Chili Peppers and Rage Against the Machine were supposed to be the main attractions.

So, certainly a couple unexpected hiccups this year as Boston Calling makes its big return following its COVID-induced hiatus.

Otherwise, the festival was off to a fresh new start this year following all that downtime. For one, Boston Calling has really doubled down on its efforts to highlight area musicians and give the fest a real sense of place. Case in point is the new-this-year Orange Stage, where the lineup is entirely New England-based bands (you can see our round-up of them here). The stage is much smaller than the others, meaning crowds that stop by to get a feel for some hometown bands get more of an intimate mini-festival-within-a-festival vibe.

Also this year, the festival has opted against booking any comedians, and no longer uses the indoor Harvard arena as a performance venue. Which is fine—this is an outdoor music festival, after all. But! It does mean fans have one less place to get under a roof in case it’s scorching hot outside. Or if, well, a giant thunderstorm rolls through.

Here’s hoping there are no more curveballs for Boston Calling 2022, and the city can put the buzzkills behind us and just celebrate the return of the biggest musical event of the year.