Golfers will get another swing at the rare opportunity to tee off in the home of the Sox this November. 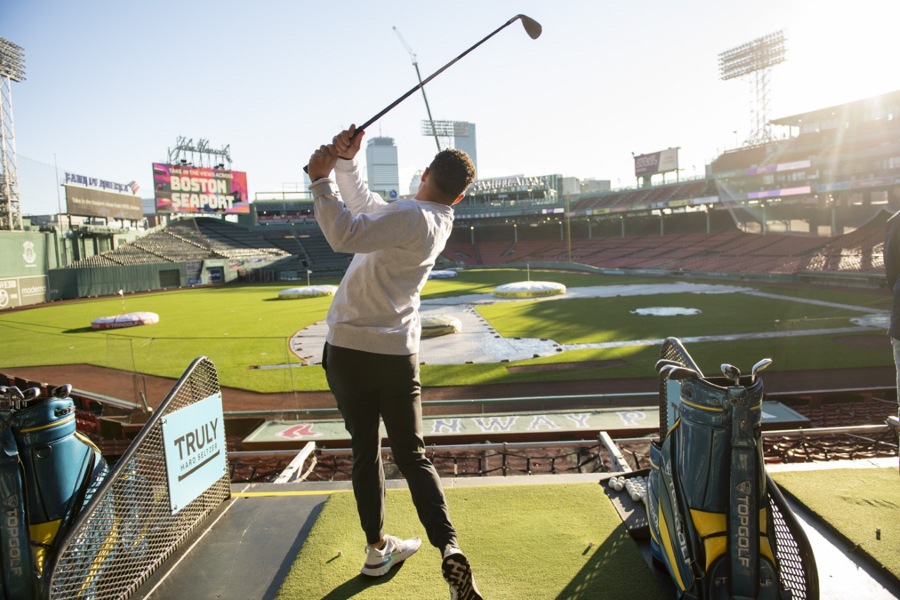 Missed your chance to tee off at Fenway Park last year? You’ll get another chance this fall, when the Topgolf Live Stadium Tour heads back to the home of the Red Sox this fall.

For the second time, the Topgolf brand will bring its wildly popular, souped up driving range experience to the historic ballpark from November 5-9.

Golfers who grab a ticket when they go on sale August 5 will get the very rare opportunity to launch a golf ball into the park, which will be covered with Topgolf-branded targets.

It was quite the sight last year to see golfers taking shots from the stands, aiming golf balls at large inflatable discs placed along the infield and outfield.

This privilege isn’t cheap: Tickets are $70 per person, for groups of six, for an hour’s worth of time taking swings. Also available will be an “experiential package” that includes some take-home goodies, and “spectator” tickets for those who just want to watch the action.

“We are delighted to bring Topgolf Live back to Fenway Park to provide another chance for sports fans in New England to participate in this incredibly unique event,” Fenway Sports Management President Mark Lev says in a statement. “Topgolf Live’s debut at Fenway was warmly received by golfers of all abilities last year, and we look forward to opening up the ballpark for another round of this exciting experience.”

Topgolf has grown rapidly in popularity in the past few years. It now operates larger outdoor facilities in the U.S. and five other countries (the closest one to Boston is in Long Island, New York), as well as indoor virtual golfing bays, including one you can find at Banners, the big sports bar at the Garden. A Topgolf facility has been in the works in Canton for a few years, but has been delayed in getting off the ground.

Fenway is one of several stops on Topgolf’s stadium tour. Before coming our way, it will pop up at FirstEnergy Stadium in Cleveland and the Great American Ball Park in Cincinnati.

This is but one of several new activations going on at Fenway these days, which in recent years has ramped up its programming between Sox games to include concerts, winter extreme sports, and, new later this year, the first-ever live comedy show on its hallowed ground.