The exhibit, inspired by the book, Evicted, by Matthew Desmond, is opening on Thursday at The Armory in Somerville. 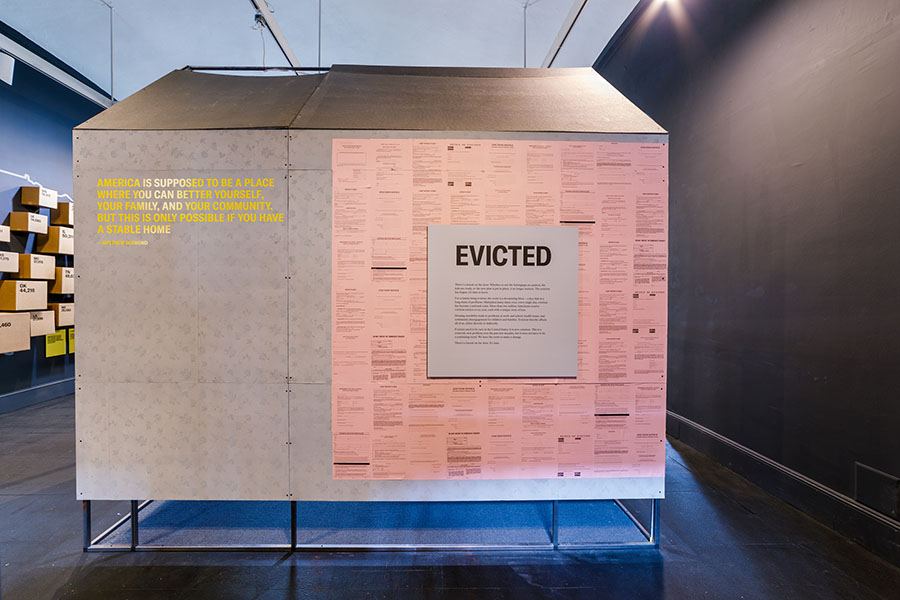 Despite living in renter-heavy Somerville 20 years, David Gibbs, executive director of anti-poverty group the Community Action Agency of Somerville, has never seen an eviction firsthand. And he’s not alone. But “Evicted,” a new exhibit at The Armory in Somerville, brings eviction to the forefront using audio, visuals, and graphic depictions to remind visitors that this is happening not only in their community, but across the country.

“For most people, they don’t see eviction happening day to day,” Gibbs says. “This exhibit brings all of that into very clear, sharp focus.”

The immersive exhibit is inspired by Evicted: Poverty and Profit in the American City, a 2016 book by Matthew Desmond in which he follows eight families in Milwaukee struggling to avoid eviction in the wake of the 2007-2008 financial crisis. The Somerville show looks at eviction at both a local and national level, and explores not only the process of eviction, but its impact.

The exhibit is a national one, having first debuted at the National Building Museum in April 2018. Since then, its has been redesigned for smaller venues and toured throughout the country. Somerville is one of its final stops before it permanently closes.

Gibbs says he was at first hesitant to take on bringing in such a large installation when the idea was brought to him by CAAS Board of Directors member Kate Byrne—launching a big exhibit like this isn’t usually the type of work they do. But the group decided to help bring the exhibit to Somerville given its relevance to the Boston area, where sky high rents have left far too many feeling the pain of losing their housing. CAAS decided to create a local portion of the exhibit on their own as well, which highlights Somerville-specific data on housing and eviction collected by CAAS itself.

Even if visitors have never seen an eviction, the exhibit doesn’t shy away from its harsh reality. In one room stands a stack of items wrapped in plastic, representing belongings taken from a household that’s been evicted. On one wall, a map of the United States made up of cardboard moving boxes shows the number of evictions per state in 2016. The larger the box, the more evictions a state has in a year (the biggest box goes to Maryland, with 628,873 evictions thanks to a state law that allows landlords to file for eviction with no prior notice).  In another, a house-like structure—one of several in the exhibit—contains a slideshow of photos from housing court and several pairs of headphones. Pick them up to hear audio of a real court proceeding about an eviction, to see how quickly some of these eviction decisions happen—and how someone’s entire life can be changed in just a few minutes.

The exhibit also employs eye-catching visuals to offer information on the housing crisis literally as soon as visitors enter. Greeting them at the doorway is a mat with a quote from pediatrician Megan Sandel reading “A stable, affordable home is a prescription for good health.” From there, infographics with black and gray color schemes with pops of yellow are used to emphasize stark numbers, whether it be how many affordable housing units are available per families who need them or how many Black women are at risk for eviction nationally. Black and white photographs of evictions help put a face to the numbers. 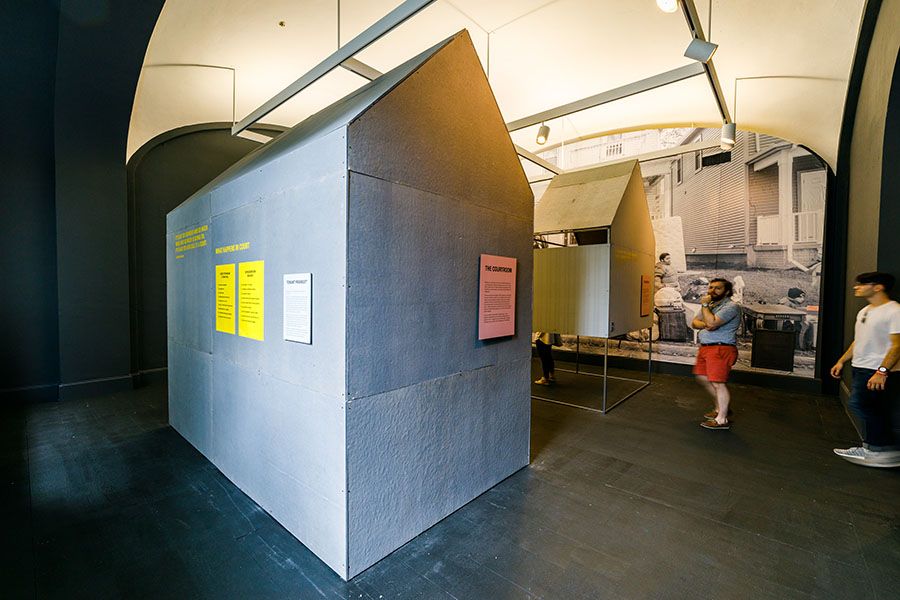 But what might be most relevant for local visitors is the portion of the exhibit dedicated specifically to Somerville, where infographics by CAAS community organizer Camila Gutierrez Plata show just how many residents in the city are hurt by housing costs and eviction. On one wall, black and white photographs by Mario Quiroz illustrate gentrification and displacement in the community, through shots of the old (an abandoned Star Market) and the new (a development by Assembly Row). In the center of the room is a 3D map by MIT lecturer Eric Huntley that shows how different neighborhoods of Somerville have been hit by this crisis. 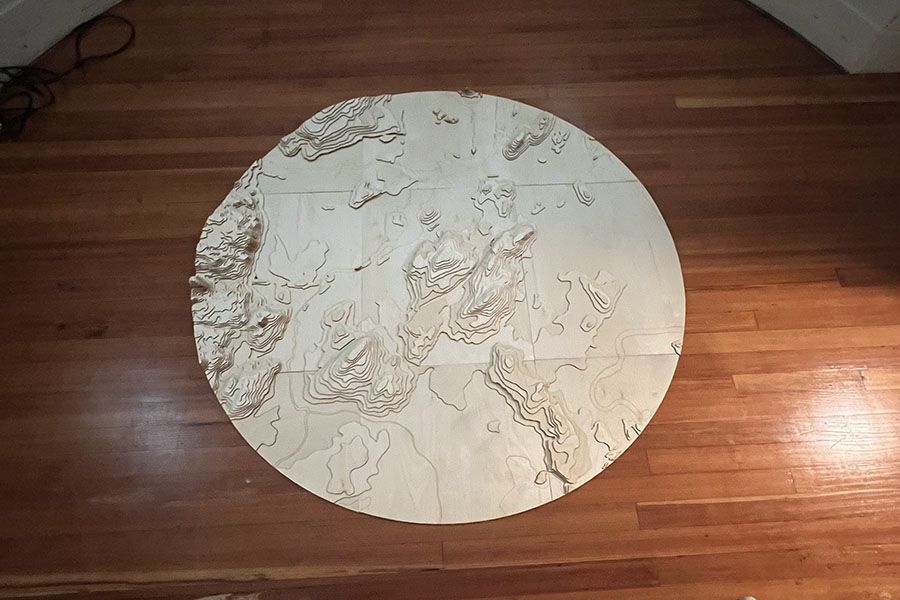 With affordable housing through Greater Boston becoming more and more out of reach, why focus on Somerville in particular? Ellen Shachter, director of the office of housing stability in Somerville, describes the city as being “in the heart of the displacement.” Her office has seen over 1,000 people come to them for assistance since the beginning of 2022, representing a “huge escalation” over years prior. Since Somerville’s eviction moratorium ended at the end of June, they’ve seen many people coming to them asking for help after their building was bought and the new landlord raised rent by hundreds of dollars a month. The average cost of a one-bedroom in Somerville is now $2,525 a month, up 26 percent from last year, according to Zumper, and over 5,000 housesholds are putting over 50 percent of their monthly income towards housing.

In hosting the exhibit, Shachter and the rest of the community sponsors (which include CAAS, the Welcome Project, the Somerville Homeless Coalition, the Somerville Arts Council, All She Wrote Books, the Somerville office of Housing Stability, and Cambridge and Somerville Legal Services) hope it’ll inspire more people to step up and look for solutions. In fact, visitors will be given a booklet at the end of their walk-through with ideas on how they can get involved, should they be so inspired. “When people come to this exhibit, when they look at the photos, when they hear the sounds, all of a sudden, they begin to understand the unbelievable number of consequences that come from homelessness,” Shachter says. “We really, really need people to understand the quiet desperation of people that are in this situation…I think all of us who have been working on this exhibit together really feel like this is a way to speak out to speak to our legislators and hopefully get people to come to this exhibit involved in finding solutions. This is something that’s no longer only affecting low-income people. It’s affecting everybody.” 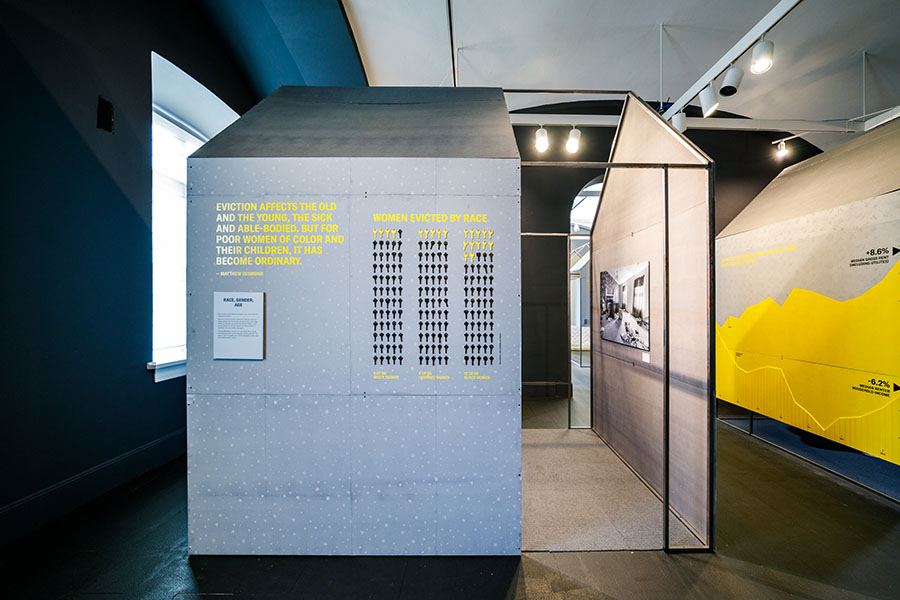 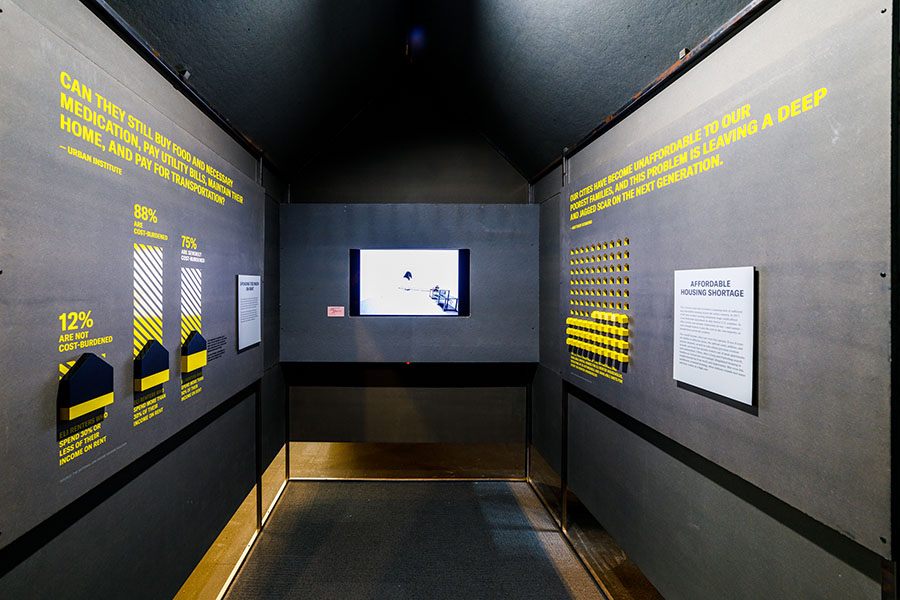 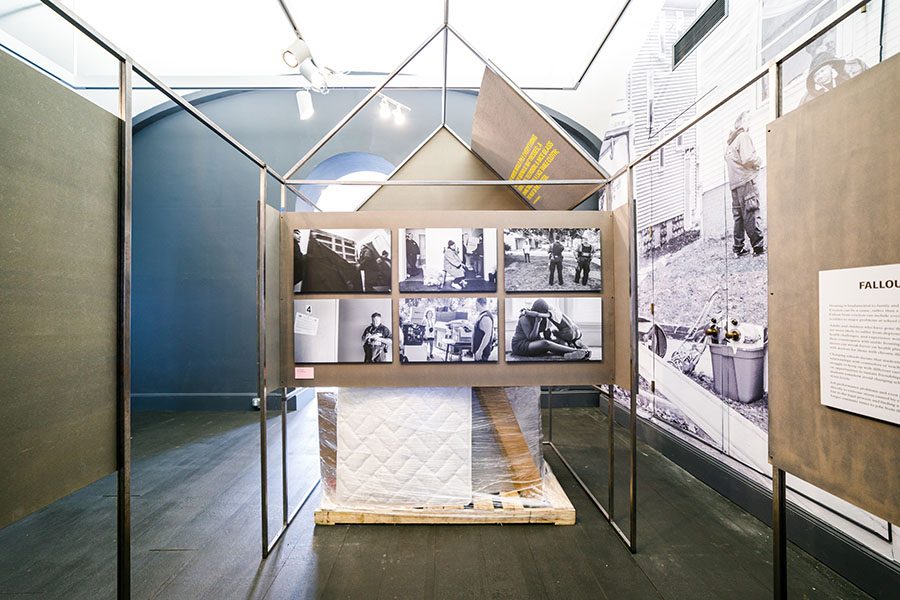