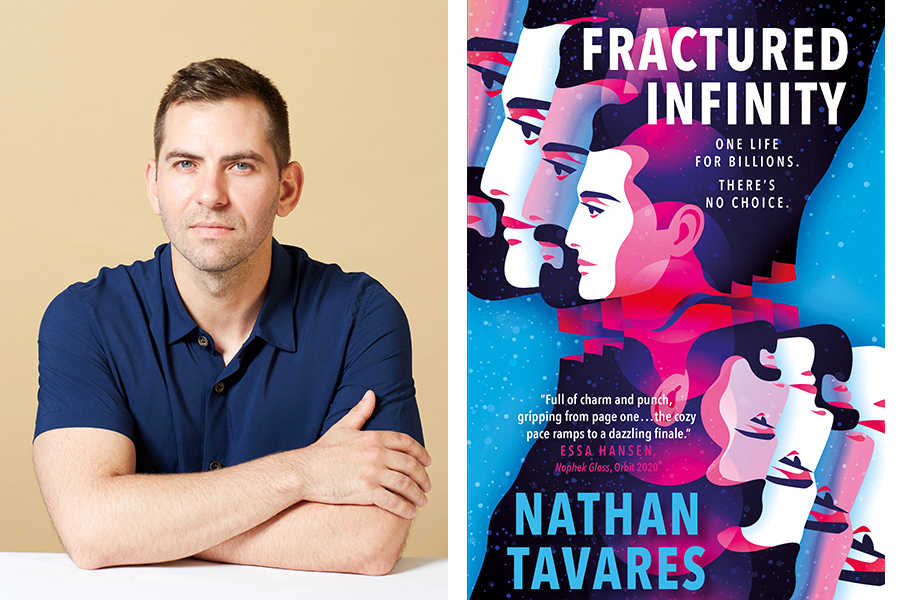 It’s safe to say that the multiverse is having a moment. Whether it’s Michelle Yeoh’s despairing laundromat owner in Everything Everywhere All at Once, or Benedict Cumberbatch battling the Scarlet Witch across universes in Dr. Strange and the Multiverse of Madness, the notion of a parallel universe with differing outcomes for humanity is a tantalizing one. What if, in another version of your life, things turned out just a little bit better–or crushingly worse? It’s a concept Nathan Tavares explores in his new novel, A Fractured Infinity. Hayes Figueiredo may not be the most professionally accomplished version of himself, but he’s the one who’s been lucky enough to fall in love with Yusuf, and that matters more than anything he can learn about his other selves.

The book straddles genres, thanks to a near-future dystopia setting in a climate change-ravaged Boston, a lot of universe hopping, and a deeply felt romance. As Tavares, a frequent Boston contributor, aptly summarizes, it’s about “a troubled filmmaker who discovers he’s connected to a weird machine from another universe, and he goes on the run to save the life of the man he loves, no matter what he has to sacrifice.” Got all that? Tavares breaks it down for us below. The book will be out 11/22, with a launch party that night at Brookline Booksmith.

What made you decide to blend genres in this book?

I came at it with the idea of just, throw everything in the world that I like at it, and then see if it works, and what doesn’t work, you can take out. It started with my love of these cerebral sci-fi movies like Contact, Interstellar, and Arrival. And how do you translate that into a book? And then how does it work when the character is a filmmaker, and he’s self-narrating and self-framing a story he’s telling you at the same time.

What inspired the setting in a climate change-ravaged future?

I remember when I was looking for an apartment in Boston a couple years ago, me and my husband were looking at things like flood maps and what part of the city will be flooded in the next 10 years. And that was so weird and interesting. And then I also remember when I lived in Fort Point, I would be walking along the channel, sometimes the water would be just so high and full of jellyfish, and it looked so weirdly post-apocalyptic.

I was also thinking to a couple years back, during the Trump presidency when he pulled out of the Paris Climate Accords. As a kid who grew up in the ’90s, you have this mindset that America is this perfect shining beacon for progress and equality. And we’re gonna save the world and all that and when you’re faced with direct evidence to the contrary, it makes you stop and think, Okay, well, if America is going to not do some of the things that we should do as far as the environment, other countries in the world aren’t just going to sit back and let the world crumble. Everyone would obviously want to pick up the slack. And so I think that mindset helps me imagine what an America past its prime would look like in the future. And then what other environmental or technological advances other countries in the world would in advance to pick up the slack.

Hayes is our narrator, but he’s also recalling the story from his own memories. Plus, as you mentioned, he’s a filmmaker invested in crafting a compelling narrative. How much can we trust him?

It’s funny, I wrote it and revised it thinking he was 100% reliable. And then my editor, made an offhand comment about how he’s a really self mythologizing character. And I had this moment of, Oh, crap. He’s kind of a deeply, deeply exaggerated version of myself. But I liked the idea of him being aware of what he was saying and purposely shaping the story, but also not giving himself a pass for being a jerk very often.

How do you think Hayes feels about the other versions of himself he encounters?

I think a big part of this was inspired by my habit—that I have mostly kicked—of just really negative self-talk that we all do to ourselves. I feel like for large parts of the book, Hayes was kicking himself, like, “in all of the millions of versions of myself I could possibly meet, I am clearly the worst one, because I am lazy and not ambitious enough, I haven’t succeeded in the ways I felt I would have.” I think constantly comparing yourself to an idealized version of yourself is something I do and everyone does. And it was a big inspiration for this whole thing.