(And no, they’re not all virtual—hooray!) 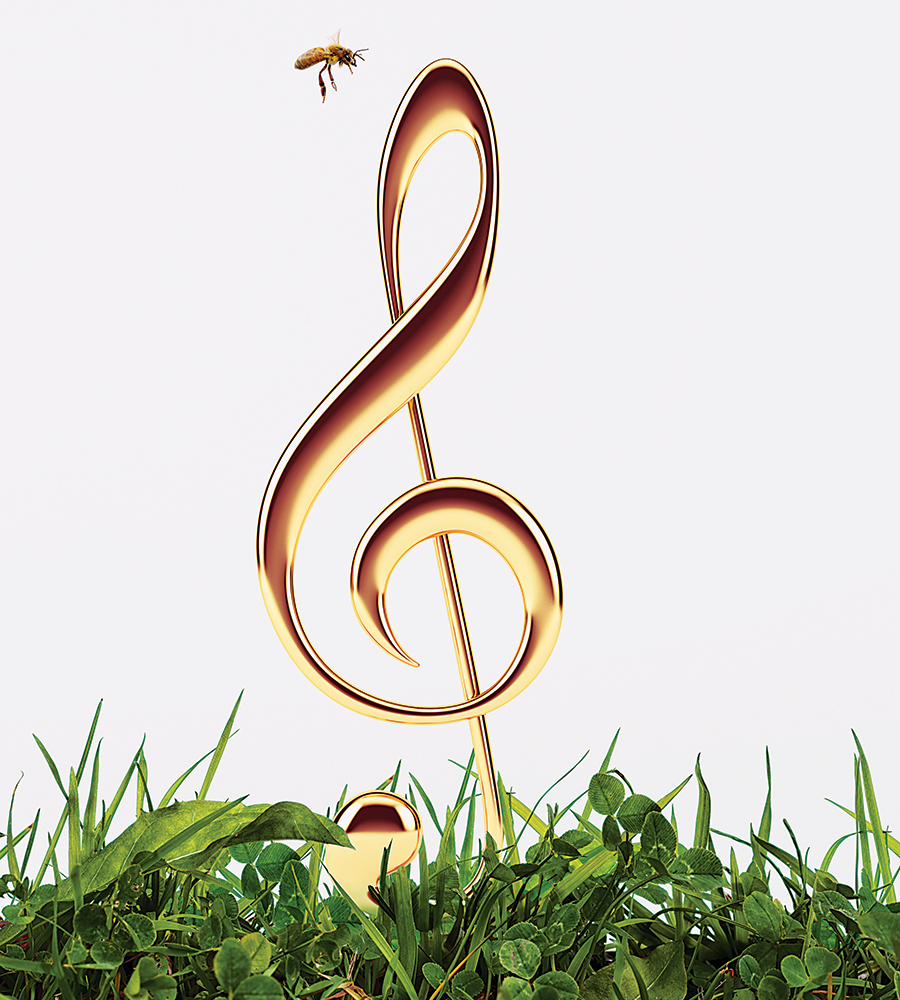 Once a traditional painter, acclaimed South African artist Ilona Anderson now uses Procreate to make vibrant, detailed animations that blend fantasy with Tibetan Buddhism. Now open to visitors, the Kingston Gallery showcases the Suffolk University arts professor’s latest collection, “Flying Without a Parachute.” The theme? Celebrating the mere idea of being alive, despite the troubled world around us.

After Company One world-premiered Idris Goodwin’s Hype Man: A Break Beat Play in 2018, the show won raves and was soon produced around the country. If you missed it, never fear: As part of the American Repertory Theater’s Virtually Oberon series, the theater group is presenting a new, streamable version of this drama about an interracial trio of hip-hop artists trying to make their name in a city roiled by a police shooting of a Black teenager. The production will be shot and edited by the Loop Lab, a Cambridge-based nonprofit training young people of color in the media arts. 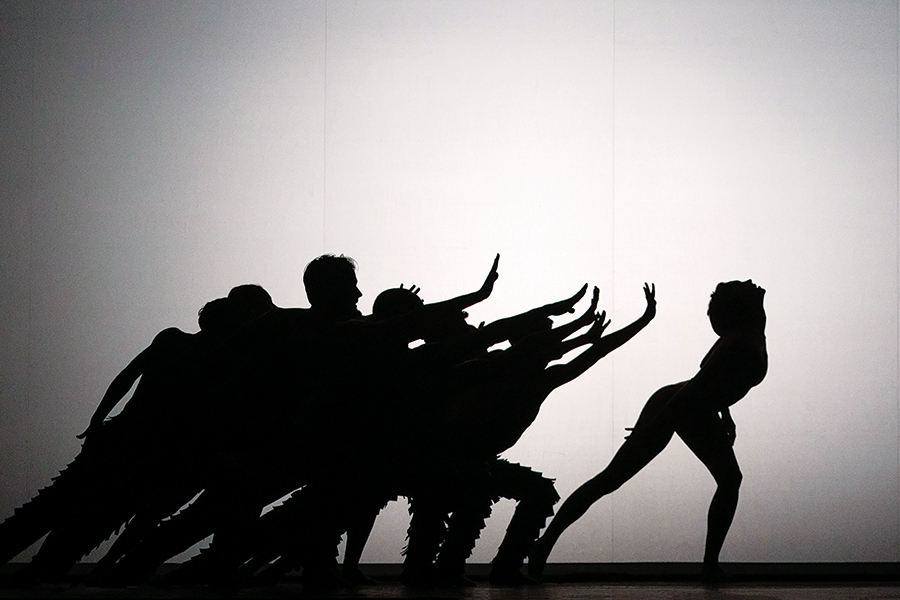 Watch dancers leap and twirl in your living room.

Though Boston Ballet had to cancel live performances this year, the company has created terpsichorean diamonds out of COVID coal with its online slate of productions, called [email protected] The final show of this virtual season, titled “Process & Progress,” includes a preview of the all-female choreographers who would have been featured in the live season’s finale, as well as new dances by European stars Nanine Linning and Ken Ossola.

At the sprightly age of 144, the Footlight Club is America’s oldest continuously operating community theater. And this season, it’s still going strong, live-streaming its spring shows, including the Patrick Hamilton play Rope. A thriller about two college students who murder a third and hide the body in the middle of a cocktail party, the performance takes place in continuous motion. If the plot sounds familiar, it’s because it was made into the famous Hitchcock film by the same name. 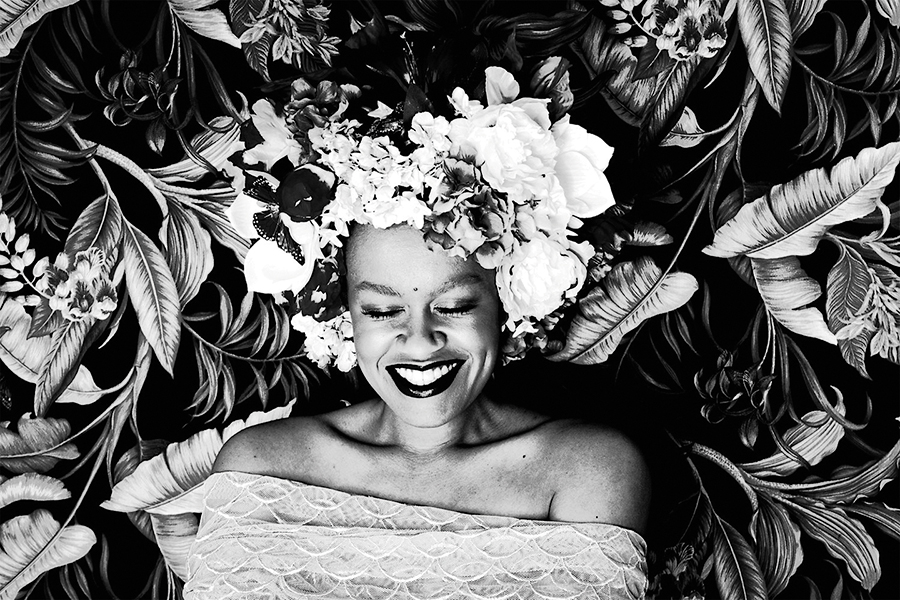 Let a world of music in.

Since 2015, Celebrity Series has hosted the Stave Sessions, an annual festival of international musicians in intimate settings, and this year it’ll be held in the most intimate place to date: your own home. The guest artists for the livestreamed event include Cristina Pato, a virtuoso of the gaita, or Galician bagpipes; Syrian clarinetist Kinan Azmeh; and Ethiopian-American singer-songwriter Meklit. 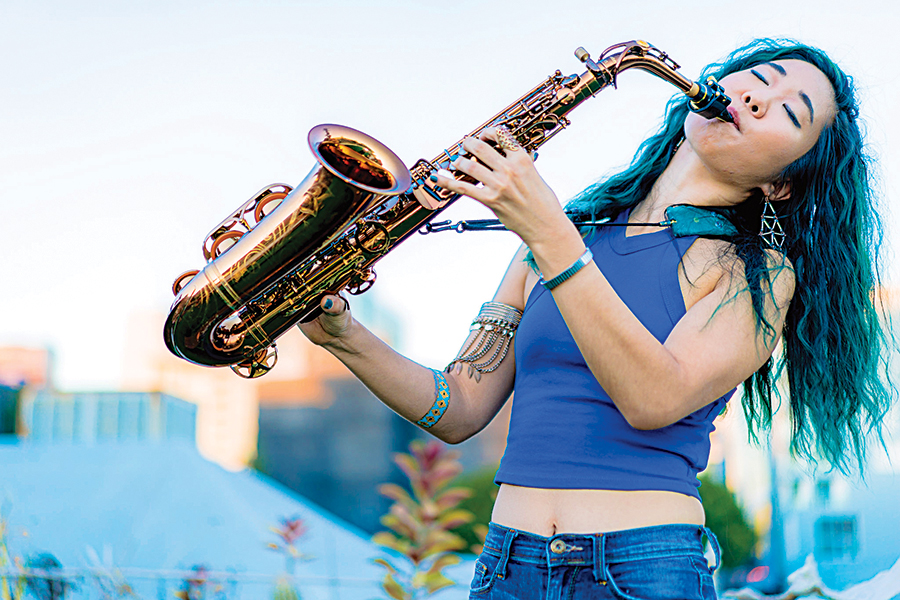 To celebrate its Diamond Jubilee, the Berklee College of Music is inviting students, faculty, and alumni from its campuses across the country and world to perform online. Stars already lined up include Brookline’s own superstar saxophonist Grace Kelly; Brazilian singer Carla Hassett, grand-prize winner of the John Lennon Songwriting Contest; and the student performers in the Berklee Rihanna Ensemble, conducted by Grammy-nominated professor Tia Fuller.

Take a seat for storytime.

The past year has certainly given all of us plenty of stories to tell: That’s why over the winter, the Theater Offensive company worked with arts advocacy groups MASSCreative and the U.S. Department of Arts and Culture to collect tales from around the country about the arts, racial inequality, and the COVID pandemic. These poignant testimonials, relayed by Americans to their fellow Americans, will be arranged into The 2021 People’s State of the Union, a one-time streamable event that’s being touted as “a poetic address to the nation.”

Five years since their last album and a full 36 years since the trio of J Mascis, Lou Barlow, and Murph put out their ear-splitting self-titled debut, Amherst-bred college-rock legends Dinosaur Jr. release Sweep It into Space. Judging from the lead single, “I Ran Away,” it promises to be another stellar platter of heartfelt tunes pummeled by rumbling drums and searing guitar solos. 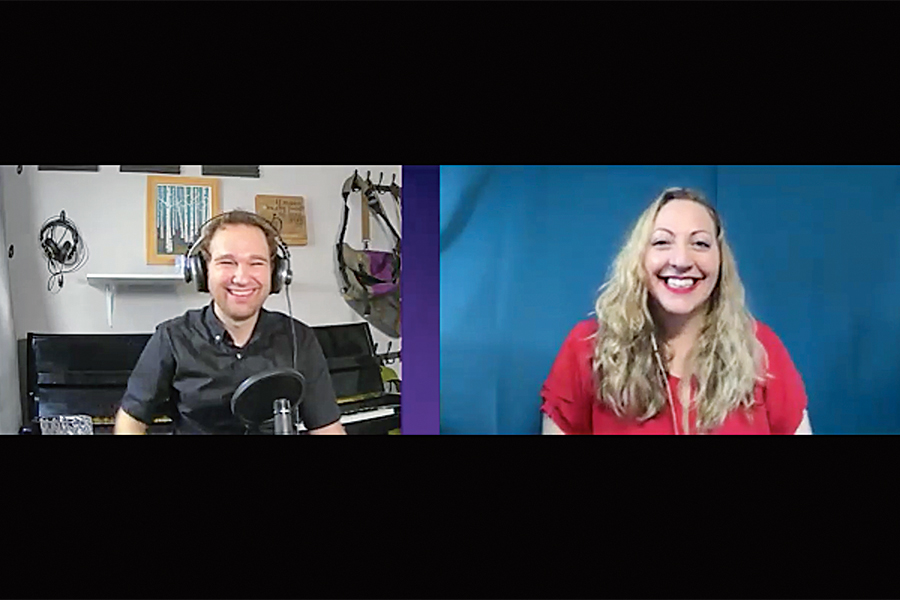 A scene from Boston Lyric Opera’s “The Tonic Hour.” / Photo courtesy of BLO

Be the star of your own opera.

For the past several months, the Boston Lyric Opera has been serving up “The Tonic Hour,” an interactive Zoom experience during which audience members collaborate with stage professionals to improvise a new musical work with a cheeky plot adapted from a classic opera. With the last event of the season coming up, now’s your chance to experience the bright lights from the comfort of home. And yes, as you can judge by the name, imbibing some liquid courage is part of the fun.

Commemorate a century of women’s suffrage.

Marking last year’s 100th anniversary of the ratification of the 19th Amendment, Boston Sculptors Gallery opens to visitors with “Amazons Among Us,” a multimedia exhibit to honor that history and the women of today. The show pairs the work of Donna Dodson, who incorporates a superhero theme into her wooden sculptures, with photography and video by Kledia Spiro, animation by Trina Baker, and new poetry by feminist writer K. Melchor Hall. 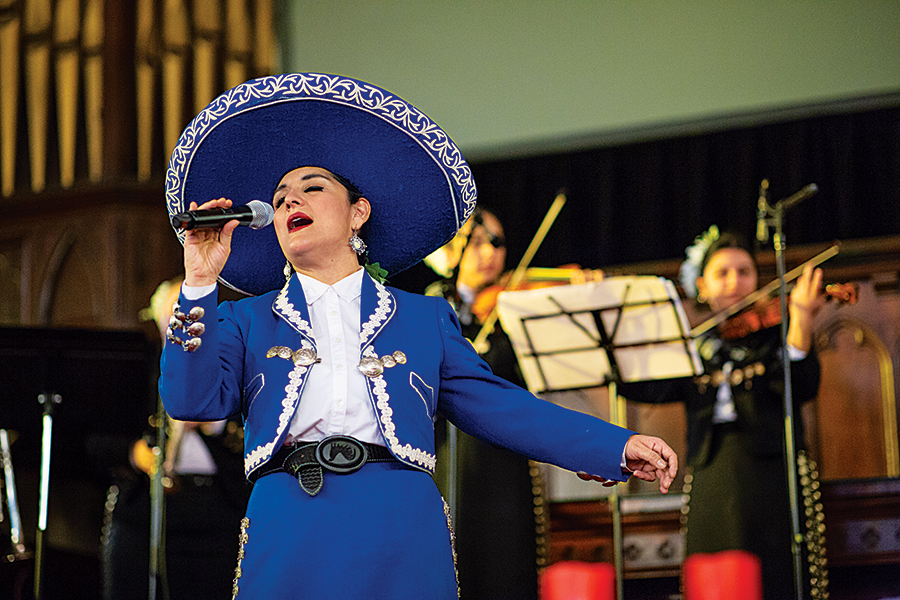 Veronica Robles has not only achieved icon status in Boston with her music, she’s also the head of East Boston’s Veronica Robles Cultural Center, which teaches the next generations Latino traditions of music and dance. Filmed at the Boston Center for the Arts’ Calderwood Pavilion, her concert will turn your armchair into a first-class spot to enjoy great Mexican music—but we’re guessing you won’t stay seated for long.

Treat your ears to an at-home concert.

The Grammy-nominated classical ensemble A Far Cry closes out its online season with a duo of themed concerts: First, there’s “Ain’t I a Woman,” inspired by abolitionist Sojourner Truth and featuring an international roster of all-female composers such as Hildegard von Bingen, Meredith Monk, and Teresa Carreño on May 8. Then there’s “Keep Calm and Carry On,” an extravaganza of “high and low” U.K. music ranging from Henry Purcell’s refined “The Gordian Knot Untied” to a rowdy selection of English fiddle and drinking songs on May 23.

Normally, SpeakEasy Stage and the Boston Project select two plays a year from proposals that speak to our current state of living in the city. But because this past year has been anything but normal, they’ve chosen to treat us to five new site-specific short plays. Watchable from home, each piece fits into the sanguine theme of “Project Resilience,” exploring how our city is bouncing back in the face of adversity.

Now in its 40th season, this year the Boston Early Music Festival is turning its celebration of baroque and 17th- and 18th-century tunes into a fully digital experience. Featuring newly filmed and archival concerts and operas from leading early-music artists, the event, “Music of Solace and Joy,” may also include lectures and master classes, and organizers are hoping to bring back an exhibition of instrument builders and music conservatories from around the world.

Get an inside look at a Boston legend.

Subtitled “a memoir of community, race, and the arc of policing in America,” William Bratton’s autobiography, The Profession, covers that wide swath of subject matter and much more. A native son of Dorchester, Bratton writes of his days rising from a beat cop to police commissioner in Boston, as well as his career leading the police departments in New York and Los Angeles—and offers behind-the-scenes looks at the hardest decisions made under the highest pressure in law enforcement.

Break out the popcorn.

At press time, it was still unclear whether the Roxbury International Film Festival would be in-person or online, as it was in 2020. Either way, the premier cinematic celebration will be a mandatory addition to your cultural calendar with its usual slate of stellar documentaries, shorts, and features about and by people of color. Should you end up watching at home, be sure to order takeout from one of the POC-owned restaurants listed on the festival’s website. 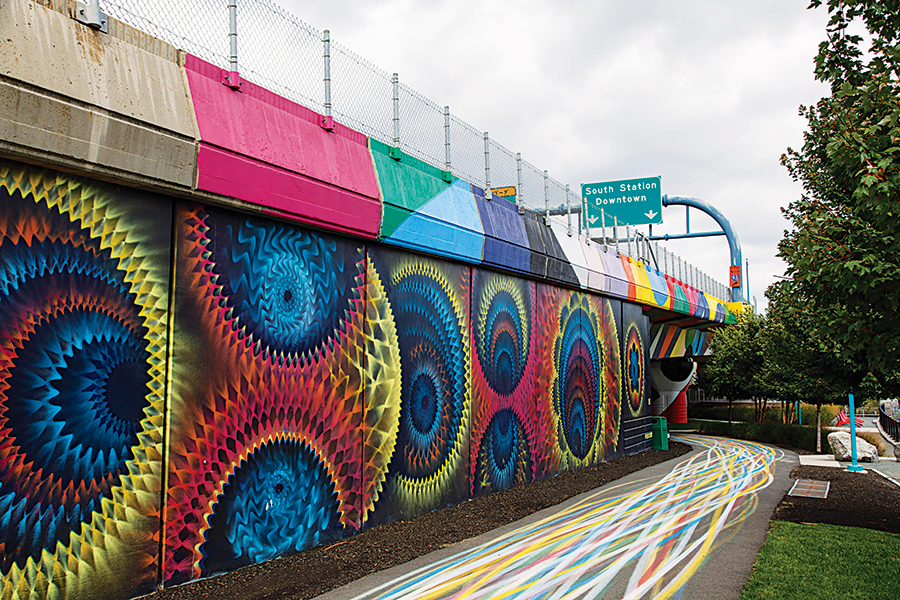 Head west for a weekend of great art in the great outdoors.

Stop 1: Underground at Ink Block and the Greenway, Downtown
Distance from Boston: 0 miles

Before hitting the road, start with a hike through the Underground’s eye-popping murals beneath I-93 near Fort Point, then take in the kinetic art and sculptures along the Greenway.

Paths lead to some 60 sculptures by superstars like Andy Goldsworthy and Nam June Paik, as well as new arrivals such as Oded Halahmy’s bronze piece incorporating Arabic, Hebrew, and English texts.

You’ll need the online map for New England’s largest collection of murals—106 of them—scattered throughout Wormtown. The Lincoln Street School, for example, is now a vibrant canvas for local and national artists.

North Adams is rich with public art, including unusual sound sculptures
from Mass MoCA—such as a bridge that harmonizes with Route 2 traffic and Corrugarou, a playable musical structure.

Stretch your legs before the long ride home at Williams College’s marquee museum. Its first-ever outdoor exhibition features work by six female artists from around the world, spread over 140 walkable acres. 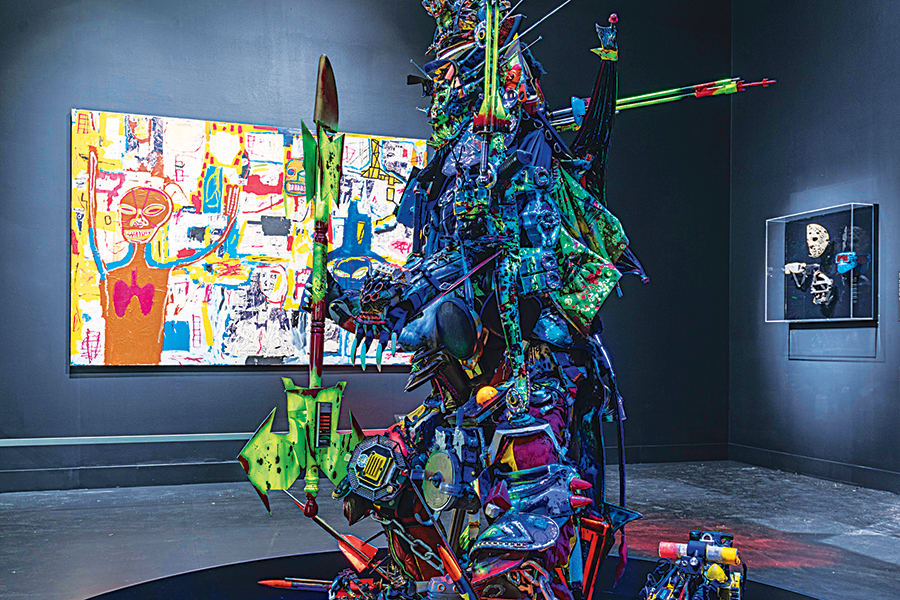 “Writing the Future: Basquiat and the Hip-Hop Generation” at the MFA. / Photo © Museum of Fine Arts

Get reacquainted with your favorite museums.

If there’s one sign that the arts world may gradually return to normal, it’s the reopening of the area’s largest museums to visitors. While these institutions have had to deal with untold financial losses over the past year, at least fans will not miss the stellar exhibitions that were scheduled for 2020. The Museum of Fine Art’s landmark display “Writing the Future: Basquiat and the Hip-Hop Generation” is here until May 16, while an exhibit featuring Elsa Dorfman, the legendary Cambridge photographer who died last year, has been extended to May 30. Showcases of Paul Cézanne and 20th-century female artists only round out a detailed portfolio.

Meanwhile, the Institute of Contemporary Art just unveiled Eva LeWitt’s vibrant series of abstract sculptures made from coated mesh, latex, and polyurethane foam, an exhibit that will run until October 23, 2022, and is continuing to showcase William Kentridge’s multimedia installation about colonial South Africa through May 23 and works by various artists inspired by Yayoi Kusama through July 18.

Up in Salem, the Peabody Essex Museum is featuring a pair of spectacular maritime-themed exhibits: the first, a series of Alexis Rockman’s fantastical shipwreck paintings, runs through May 31; the second, called “In American Waters,” will display works by big names such as Georgia O’Keeffe, Jacob Lawrence, and Thomas Hart Benton (May 29–October 3). No matter which museum you visit, one thing’s for certain: After feeling lost without the experience of wandering through halls and galleries, it will be wonderful to get lost in art again. 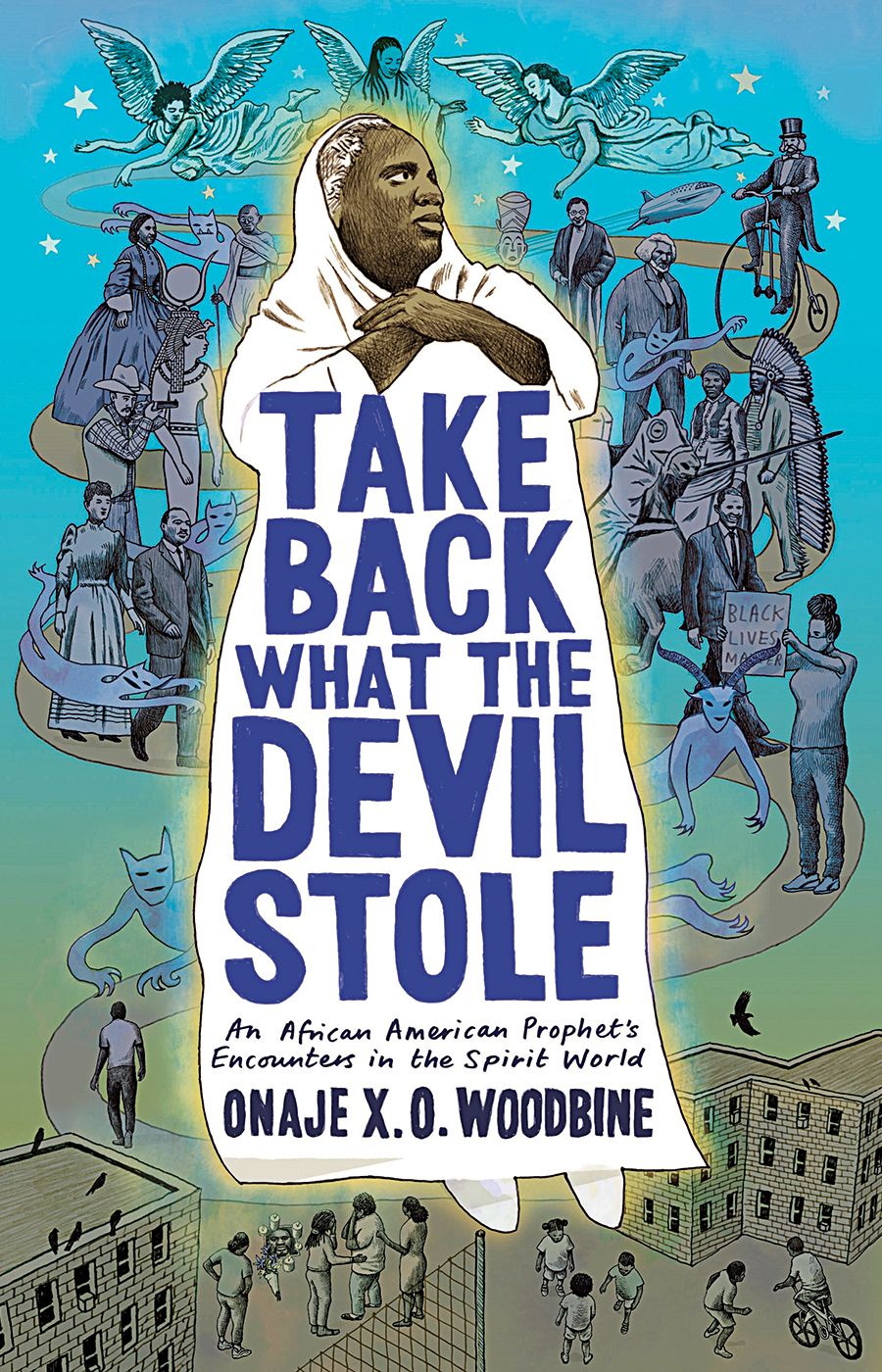 Immerse yourself in the spiritual side of Boston.

Donna Haskins may seem like an unusual character: She’s a woman who has undergone unbearable trauma—from child abuse and sexual assault when she was young to cancer and thoughts of suicide as an adult—and come out the other side by living halfway between the human and spiritual realms. After seeing her share of horrors in the poorest parts of Boston, Haskins had a religious epiphany at Morning Star Baptist Church that not only saved her at age 46, but also led her on the path to save others by talking with angels and relaying their guidance.

While that sounds like a fascinating story or movie, Haskins is actually a real-life Roxbury citizen and the central figure of Take Back What the Devil Stole, the latest nonfiction book, out April 6, by Boston’s own Onaje X. O. Woodbine. A distinctive blend of reportage, personal memoir, and ethnographic scholarship rendered in elegant prose, the book is not only a fascinating portrait of a resilient person, but an examination of what American society has inflicted on Black women for generations and how they have used religion to get through it. “Finding this spiritual genius in the middle of a forgotten Roxbury neighborhood was a profound experience for me,” says Woodbine, who now teaches philosophy and religion at American University. “It reminded me that life can spring from cracks in the concrete.”