Get out of your car and get on a boat. 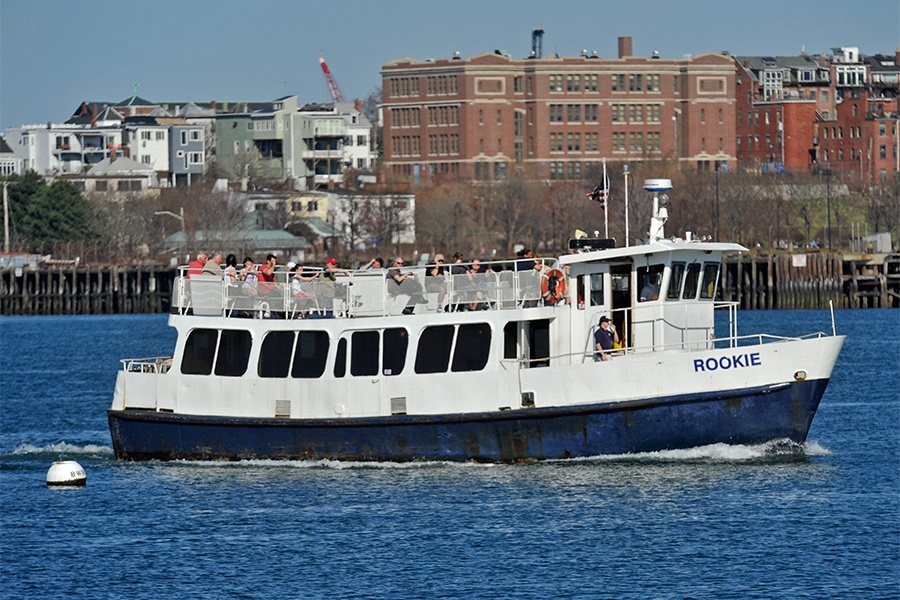 Whether you’re looking for a way to cool off, see Boston through new eyes, or just avoid the perpetually bad traffic, a range of ferries and water shuttles provide a lovely option for summer travel around the area. Before there were bridges and tunnels and cars and trains, Bostonians traveled by boat—crisscrossing the harbor and rivers by ferry. Throughout much of the 20th century, water transportation options declined as folks climbed aboard the Blue Line and into their cars.

But in recent years, there’s been a resurgence in options for exploring Boston Harbor by boat, and the longer, warmer days mark the return of seasonal service. With parks to explore, breweries to try, and museums to visit at one end or the other, not to mention stunning views of the skyline and shoreline along the way, the trip is part of the adventure. Whether the vessel departs from Long Wharf or one of the newer docks, now is the perfect time to head to the water and climb aboard.

On the way: The upper deck of this little ferry is the place to be. As the boat slowly pulls out of Long Wharf, take in the view of the Custom House Tower with its magnificent clock face. The bottom of the original Custom House building once sat at the water’s edge, but reclamation efforts have put quite a bit of city between it and the modern shoreline. Pulling into Charlestown, the ferry dock at Pier 4 provides a picture perfect view of the Bunker Hill Monument.

What you can do there: This ferry connects two of the biggest draws for Boston tourists: the New England Aquarium and the USS Constitution. Inside the Aquarium, watery exhibitions wrap around a giant ocean tank with touch tank experiences along the way. Not enough time for a full Aquarium visit? The outdoor harbor seal enclosure provides great entertainment for passerby whether the seals are frolicking or floating.

In the Charlestown Navy Yard, visitors can climb aboard the 225-year old USS Constitution or the USS Cassin Young, a World War II-era destroyer. Every day, “Old Ironsides” fires her canons at 8:00 a.m. and again at sunset. The ceremony is fun to watch, but it tends to startle anyone who isn’t expecting it.

On the way: The trip between Lewis Mall and Fan Pier offers views of the Nantucket Lightship and plenty of sailboats. Be on the lookout for seaplanes (and regular airplanes) arriving and departing. Occasionally, the boat captain’s friendly dog adds an extra dose of delight to the ride.

What you can do there: This trip is bookended by art. On the Seaport side is the main building of the Institute for Contemporary Art, with rotating exhibitions in the fourth floor galleries as well as indoor and outdoor performances. Bookworms may appreciate the new outpost of Porter Square Books nearby, which is sharing a space with Grub Street’s Center for Creative Writing.

At the other end of this trip is the ICA’s Watershed, an extension of the museum that’s open from May 26 to September 5. It’s also accessible via an ICA water shuttle service included free with museum admission. Also in the East Boston Shipyard are Downeast Cider and the Seabiscuit, a coffee shop that serves Australian meat pies. Thanks to two summers of mural painting by a group called SeaWalls, there’s an abundance of street art about oceans to explore around the neighborhood (check this map for details).

On the way: As the ferry makes its way around the end of Deer Island and picks up speed, the temperatures drop and the North Shore appears. It’s an especially pleasant reprieve on a hot day. Passing Winthrop, Revere, Lynn, Nahant, Swampscott, and Marblehead, the shoreline changes from a combination of beaches and industry to homes perched on cliffs. After passing a smattering of islands, the boat pulls slowly into Salem Harbor with a view of Fort Pickering’s Lighthouse and hundreds of sailboats on mooring balls. There is a very small chance of spotting a whale along the way.

What you can do there: Some of Salem’s oldest homes are clustered along the water, including the famed House of Seven Gables, which is a short walk from the ferry pier. Down the street, the National Park Service manages the Custom House where Nathaniel Hawthorne worked. Clustered around Essex and Washington Streets is the bustling hub of the walkable downtown with a mix of shops, restaurants, and witch-themed experiences. The Peabody Essex Museum is a must-see, with galleries that capture the maritime past of Salem as it traded with ports around the world, the captivating 19th-century Yin Yu Tang Chinese House, and a rotating mix of special exhibitions focused on art, fashion, and science.

$25 one way with discounts for round trip, daily May 26-October 31, commuters, children, seniors, and locals, cityexperiences.com.

On the way: A ride on this ferry provides the most comprehensive water tour of Boston’s Inner Harbor. Passengers who want to be outside can stand at the stern, but the large windows make the sunny interior a great place to look out in all weather. When departing from Lovejoy Wharf, the views include the operations buildings of the Charles River dam and locks, an intimate look at the ongoing construction of the new North Washington Street Bridge, and a 180° view of the USS Constitution.

What you can do there: Lovejoy Wharf’s boardwalk overlooks the Zakim Bridge and TD Garden. In addition to the ferry dock, it is home to Converse and their flagship retail store, which offers customized shoe designs. Night Shift Brewing and the Alcove have patio seating for drinking and dining, and Row House hosts outdoor workout classes on their rowing machines. With time to spare before the next train or a big game, the new Hub Hall inside North Station offers another cluster of restaurant options.

Around the Seaport’s ferry dock, the best lookout spots are from the top of the Fan Pier Pavilion Roof, from the amphitheater seating at the ICA, and on the steps leading to the water at Pier 4. For outdoor dining, Gather at District Hall feels like an institution in this rapidly changing neighborhood. Over on Thompson Place is Trillium Brewing’s headquarters and beer garden.

On the way: The boat trip to the Encore Boston Harbor is the best way to explore the Mystic River, and there’s certainly not a swankier way to travel than in the small luxury yachts that provide the service. In contrast to the elegant interior, the trip passes boat yards and working port areas and heads under the Tobin Bridge. For a particularly striking view, make sure to take in the cresting hills of Charlestown from the north, with the Boston skyline from the Custom House to the Prudential tower spread out in miniature behind them.

What you can do there: The hotel, casino, and adjoining restaurants provide a taste of Vegas on the shores of Everett. More adventurous and outdoorsy passengers can explore the waterfront parks and paths along the Mystic and Malden Rivers on foot or with Bluebikes.

Free, afternoons and evenings Thursday through Sunday, May 1 – September 30, visitwynn.com.

On the way: While traveling to Georges Island, ferry riders see several of the other thirty-four harbor islands: Thompson, Spectacle, Long, Gallops, and Rainsford. Though each one has its own ecology from beaches to marshes to cliffs, most of the islands look like lumpy green hills because they’re drumlins created by glaciers.

What you can do there: This summer, Spectacle and Georges Islands are awash in activity as the Boston Harbor Islands National and State Parks celebrate their 25th and 50th anniversaries, respectively. Spectacle Island offers swimming, kite-flying, yoga classes, and Sunday afternoon concerts. Georges Island is home to Fort Warren, which might be haunted and definitely stays cool in the summer, as well as grills and picnic areas and the occasional vintage baseball game.

On the way: Leaving the Inner Harbor, passengers on the MBTA ferries to Hingham and Hull can watch cranes unload cargo ships at Conley Terminal, people fishing off the pier at Castle Island, and working boats of all sizes. The vessels are relatively new and offer a pleasant indoor space for the year-round service as well as generous outdoor deck space.

What you can do there: There’s not much at Pemberton Point in Hull, but bring a bike and there’s plenty to explore in this peninsular town. The public library is in the former summer house of the writer John Boyle O’Reilly, Fort Revere provides a great vantage point for seeing three lighthouses (Boston Light, Graves Light, and Minot Light), and the Hull Lifesaving Museum is overflowing with nautical history. Five relatively-flat miles from the ferry dock is the incredibly popular Nantasket Beach with a carousel and mini-golf across the street.

Adjacent to Hingham’s ferry dock in Hewitt’s Cove is a whole range of restaurants and shopping opportunities, as well as a movie theater. With a bike, it’s easy to access Great Esker Park and Bare Cove Park on either side of Back River. Other nearby parks include Webb Memorial State Park and World’s End, both technically part of the Harbor Islands despite their attachment to the mainland, as well as the expansive Wompatuck State Park.

$9.75 each way, weekdays year round, weekends from late May to early October, mbta.com.

On the way: Like most of the water taxis in Boston Harbor, this launch boat sits close to the water and provides more intimate views of the docks and piers depending on the tides. Looking west, passengers get a view of Langone Park in the North End; looking east, there are clear views of the bridges that cross Chelsea Creek.

What you can do there: The complimentary shuttle boat started several years ago to connect folks in East Boston to Charlestown’s Pier 6 restaurant and to connect folks in the Charlestown Navy Yard with the Reel House in East Boston. The shuttle now continues on to the Tall Ship as well. At either end, there’s plenty of Harborwalk to explore on foot, interspersed with working port areas. If there’s a kiddo on the adventure, both LoPresti Park and Menino Park have good playgrounds.

Free (but tip the captain), Friday to Sunday from 11 a.m. to 10 p.m. (May to October), bostonlaunchcompany.com.