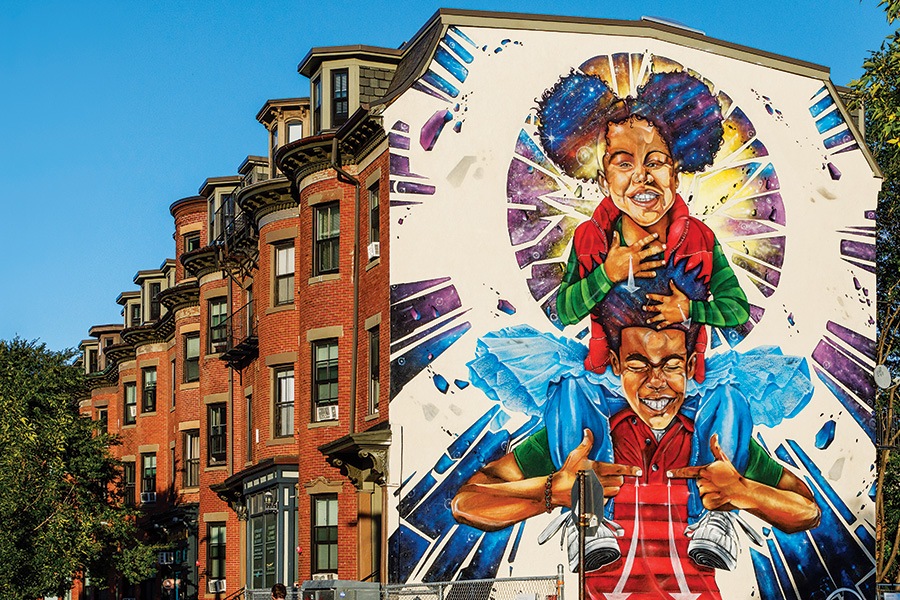 Chances are you’ve seen Rob Gibbs’s work before and didn’t even know it. After all, the prolific mural artist, who goes by the name Problak, has been painting the city’s handball courts and honeycomb hideouts since he first discovered graffiti as a young boy growing up in Roxbury. For a long time, though, Gibbs remained largely in the shadows of Boston’s art establishment. “The street was my gallery,” he says.

Intricate murals and graffiti, of course, aren’t new to Boston: Talented artists such as Gibbs have been expressing themselves on the city’s brick, concrete, and steel structures for decades. What is new? The recognition, visibility, and funding they’re now receiving as their work spreads across the city like a rainbow, showcased alongside outdoor pieces from internationally recognized contemporary artists such as Nick Cave and Oscar Tuazon for anyone to view at any time, sans admission fees.

So why is gray old Boston getting a colorful new upgrade? Public-art advocates point to the wave of new development (and money) flooding the city, providing increased opportunities for creatives to show off their work to a larger, more diverse audience. “I think street art and public art…are being used by mainstream organizations that want to bring more vitality and eventually economic development to spaces,” explains Kate Gilbert, executive director of the local art accelerator Now + There. But at the end of the day, she says, the goal of these pieces should be to “spark conversation, bring people together, enliven our spaces, and give people joy.”

Joy is surely what you’ll feel as you stroll by Gibbs’s recently completed mural Breathe Life 3, commissioned by Now + There on a Lower Roxbury building not far from where the artist grew up. And the emotion will only grow stronger as you encounter other works of art that live on Boston’s biggest canvas—its sidewalks, signposts, and buildings. Who says you have to go indoors to see art, anyway?

The third mural in the “Breathe Life” series by Rob “Problak” Gibbs covers 1,700 square feet of a building that the artist used to pass every day growing up in Roxbury. The image depicts the brother and sister from his previous two murals with their hands forming the gestures for “breathe” and “life” in American Sign Language, a message of positivity. 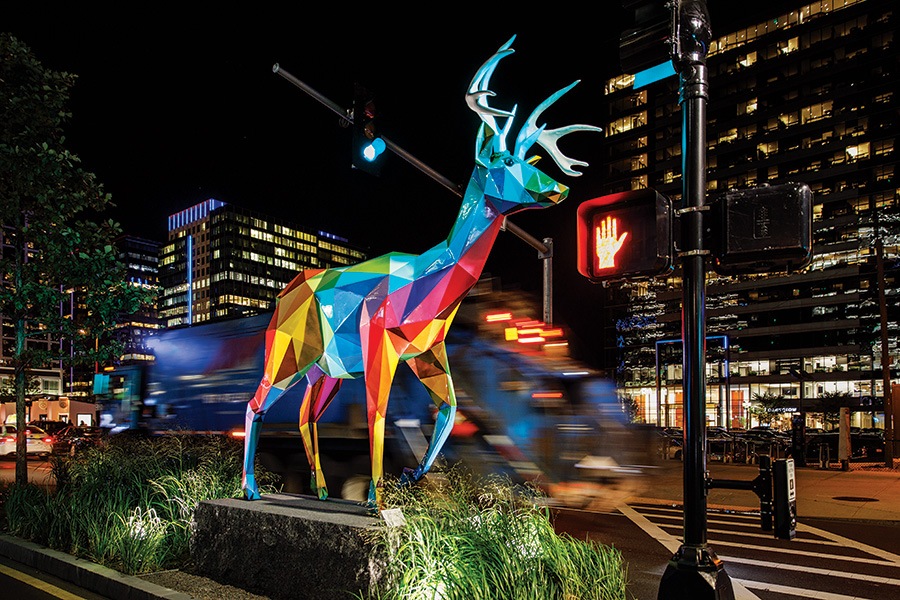 Spanish artist Okuda San Miguel’s towering pop-surrealist sculptures in the Seaport include recognizable squirrels, birds, and a deer, as well as mythological creatures. Begin at 50 Seaport Boulevard to fully appreciate his imaginative narrative, which explores creation and animals’ coexistence with humans. 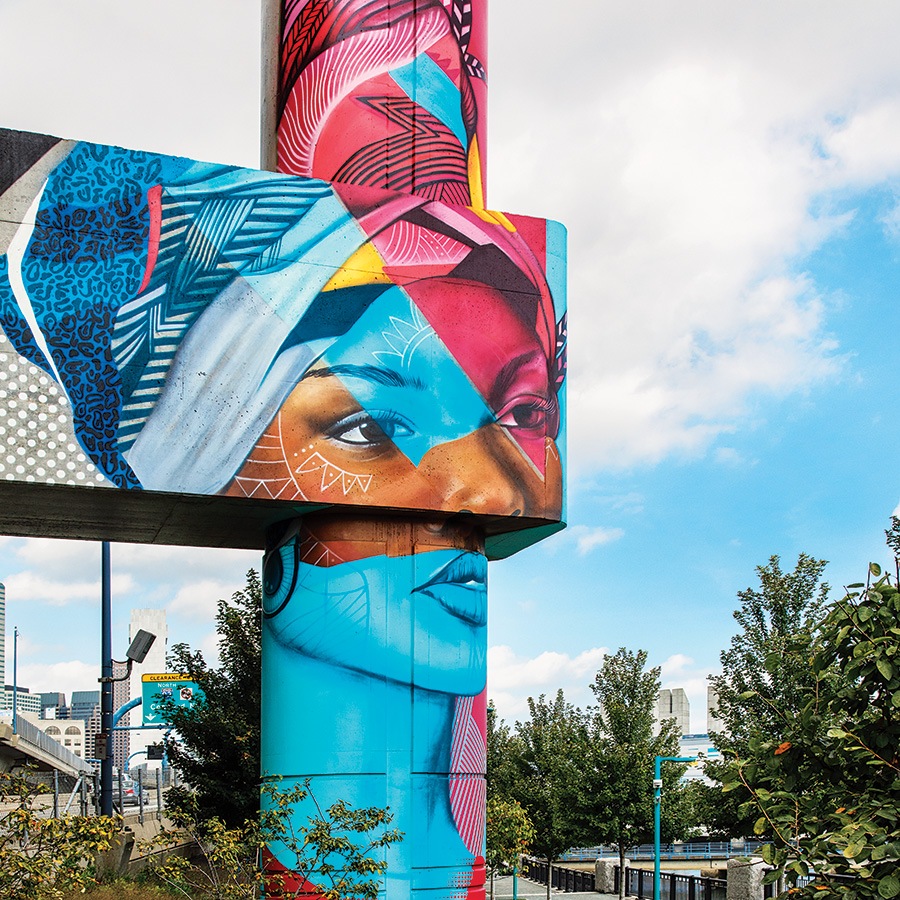 Cranes in the Sky

This past summer nine pieces were added to the Underground Mural Project at the South End’s Ink Block development. This particular work is by School of the Museum of Fine Arts alum Victor “Marka27” Quiñonez. Inspired by Solange and her song of the same name, Quiñonez hopes the piece will embolden his two daughters and represent the diversity of Boston. 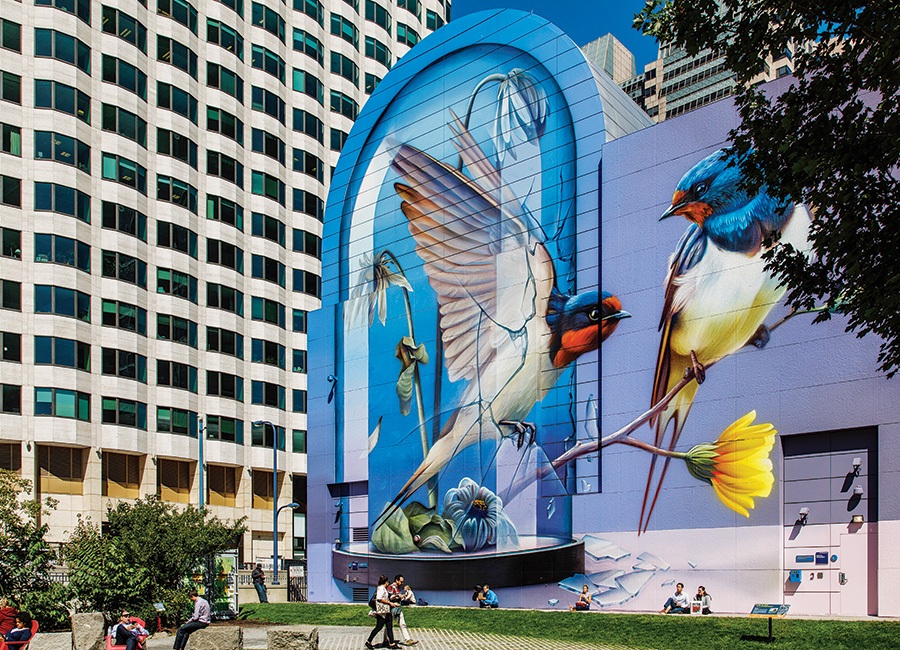 Known for his politically charged paintings and murals in Europe, Dutch artist Stefen “Super A” Thelen went a little softer for this creation on the Greenway, which shows a barn swallow escaping a bell jar as a way to illustrate the obligation we all have to break free from the systems that imprison us. 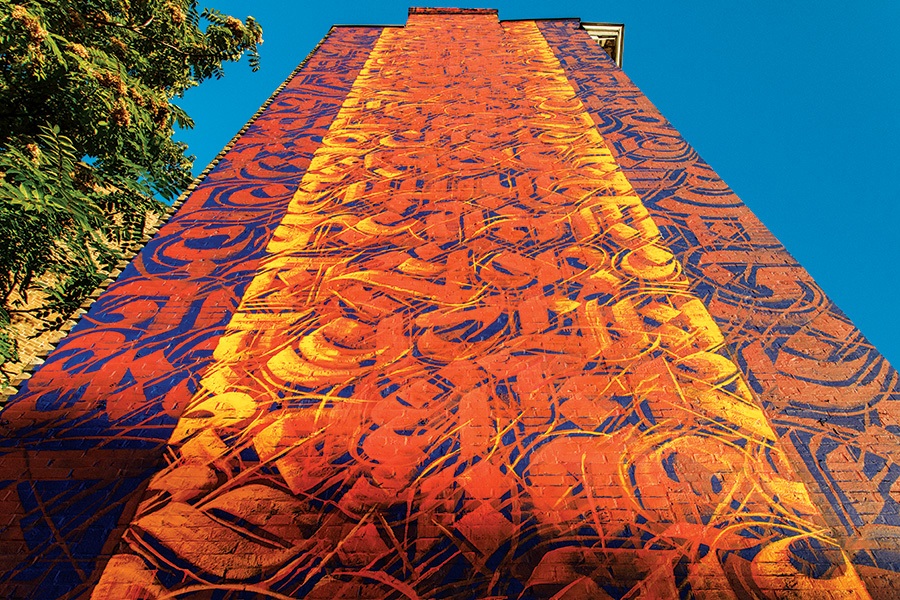 For Cambridge with Love from Nepal

Nepal native Sneha Shrestha, a.k.a. “Imagine,” painted this mural on the side of a five-story building blocks away from the Central Square alley where she would practice her graffiti at dawn. Mentored by another artist in this feature, Problak, she refined her style to what it is today: inspirational messages written in a blend of Sanskrit letters and traditional street art. The words here roughly translate to “success is defined by what’s in your heart and not your background.” 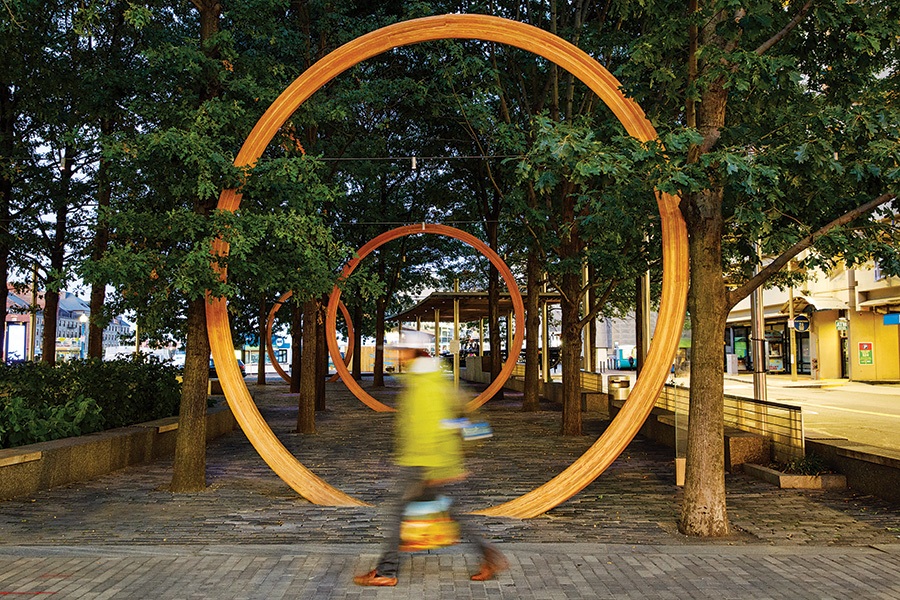 Mixed-media artist Oscar Tuazon has been concerned with socio-environmental issues since his days as a Pacific Northwest high schooler. His recently installed sculpture at Central Wharf Park is composed of three wooden rings suspended among the trees, and explores the connection among water, trees, and humans. 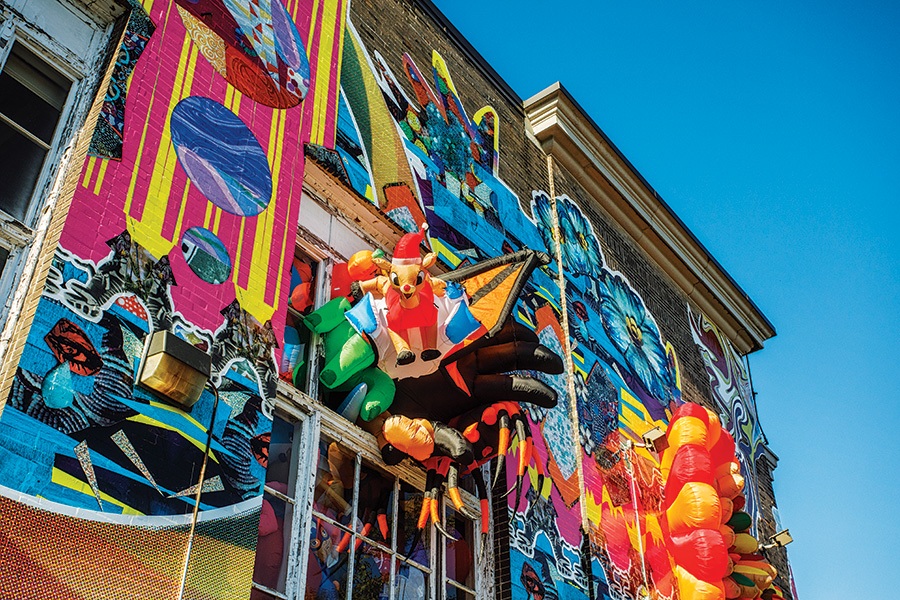 It began as a giant amorphous body of inflatable creatures handmade by renowned Chicago-based contemporary artist Nick Cave and installed at the Cyclorama, then became a parade that traveled from the South End to Dorchester. Now the piece bursts through the windows of a building in Uphams Corner, wrapped with a colorful mural inspired by what brings the community joy. 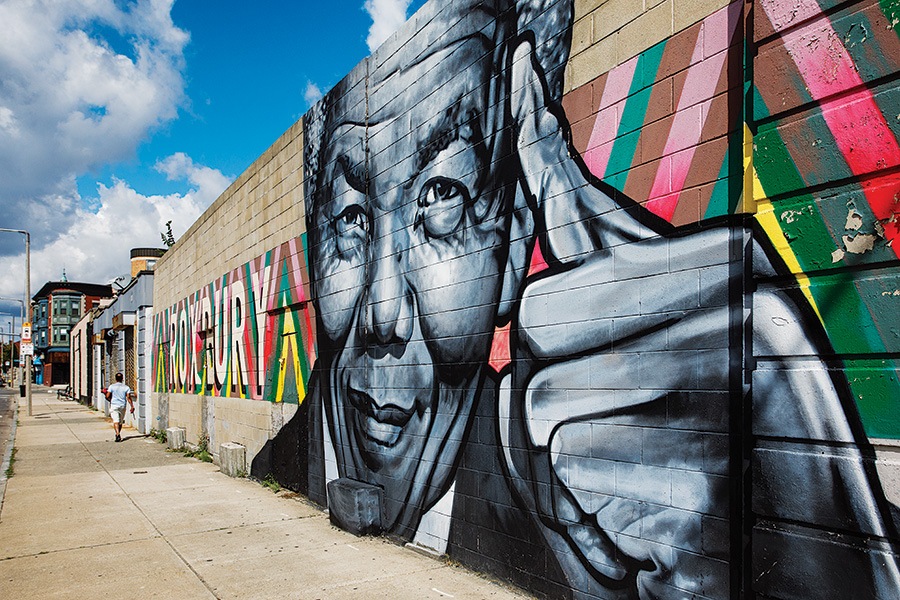 Painted in 2014 by local street artists Richard “Deme5” Gomez and Thomas “Kwest” Burns as part of the city’s “Pop Up! Dudley Connections” art initiative, this giant portrait of Nelson Mandela on Warren Street commemorates the icon’s 1990 Boston visit. Although there are rumors that the mural will eventually be torn down, its five-year legacy has inspired a Roxbury Love hashtag and dubious copycats for a local Heineken ad campaign.