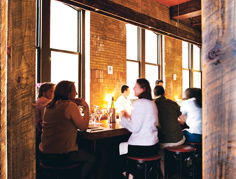 It's been two years since chef Tim Cushman's refined sushi operation made a stealth entrance onto the scene, gradually picking up buzz until being 'discovered' by gobsmacked foodies whose praise launched it to the national stage. Now, even as O Ya's new-kid glow has faded (and despite its stunning price point), the wait list remains impressively long. And we'll tell you why: Visit after visit, the hypnotic beauty of the food, seemingly simple but layered with clear flavors (white soy and yuzu glazing a sweet scallop, Thai basil and Szechwan pepper on sweet-salty eel), never fails to catch jaded palates off-guard—and has even been known to make some diners blush with delight. 9 East St., Boston, MA 2111, oyarestaurantboston.com.

Recently expanded. Roger Orman is extremely helpful, regardless of how much you have to spend. 1354 Commonwealth Ave., Allston, MA .

Boston streets are hell on heels. Case in point: the heel of a favorite Stephane Kelian pump, chewed by cobblestones. But Ares came to the rescue. After its ministrations, we couldn't even tell which heel had been broken. 84 Charles St., Boston, MA .

You've got to taste them, preferably with the special sauces, to believe them. Exra "Spee " Anderson is one of the Hub's great culinary treasures. Somewhere in the corner of the Newmarket parking lot, corner of Massachsuetts Avenue and Newmarket Square, Boston, MA .

"Elvis and Marilyn" at the ICA. Pop art that didn't pop.

Stopping by this tiny garden-level shop feels like visiting your friendly but gruff grandfather's house: Cobbler Mike Damirshian won't hide his disappointment in your shoes' subpar appearance, but he will assure you that they can, in fact, be saved. And each and every time, he's true to his word—heels that have been worn to metal posts are miraculously rebuilt, holey soles are replaced, and scuffs are polished away. You'll walk out with kicks that look (almost) brand new. 84 Charles St., Boston, MA 02114, .

For lovers of serious french wines, Brookline Liquor Mart is one of the best stores in the country. True, if you are looking for widely available wines, you may find cheaper places elsewhere. But because the store is owned by Classic Wines Imports, it boasts an absolutely extraordinary selection of French wines— many at bargain prices. Brookline's strong suit— older, mature Burgundies— are not just incredibly well priced for their age and provenance; they are also almost impossible to find elsewhere. A friendly, well-informed staff will hlp you find the real treasures. 1354 Commonwealth Ave., Allston, MA .

Have you ever broken your parking light while trying to squeeze into that enviable spot on Newbury Street? For less than half of what you'd pay at most dealerships, these guys will provide (or order) most any spare part. 290 River St., Cambridge, MA .

From $40 DVF wrap dresses to funky, quality jewelry to blessedly organized racks, the charms of this Davis Square shop are well docuented (as are its occasional annoyances: yes, the label says Marc Jacobs, but they're still '90s-era power-blue capris). This past year, though, it's Poor Little Rich Girl's new-clothing section that's proved extra appealing. Rummage through some Route 66-brand Target cast-offs, for instance, and you might score an on-trend H&M floral blouse marked 30 percent off an already bargain basement price. Bonus: fresh inventory from Forever 21, that fabulous fashion-junk-food retailer that has thus far mysteriously failed to set up shop in town. 255 Elm St., Somerville, MA 2144, poorlittlerichgirl.com.