Maria Garcia, "Anything for Selena"

With “Anything for Selena” — a limited series that’s part investigation, part love letter, and part deeply personal essay — WBUR’s Maria Garcia gets to the heart of why so many people still adore the late Tejano pop star. Through vivid storytelling in both English and Spanish, she fills in gaps in the public’s understanding of Selena’s life via intimate interviews with elusive family members. Mixed in are heart-to-hearts with fans who saw, as she did, an aspirational version of themselves in the code-switching, border-straddling performer. wbur.org/anythingforselena.

Whose typical response to a political thwarting is to retire to his office for a good long sulk. Will someone please tell George to grow up and take his lumps like a big boy.

Hidden in the quiet, tweedy folds of residential Cambridge, this neighborhood restaurant is part exquisite cuisine, part delicious local fare, and all parts homage to true French bistro culture. Entering the intimate, family-owned spot, with its cozy furniture and warm colors, is like walking into a well-loved (and well-populated) living room. But the extremely well-priced menu is anything but predictable. Chef Tony Maws keeps it fluid with his improvisations (Exhibit A: the red chile-marinated prime hangar steak with sultry roasted bone marrow) and an ebb and flow of local produce so fresh, all Montmartre would be impressed. 5 Craigie Circle, Cambridge, MA craigieonmain.com.

Off the Wall Cinema

The Market Theater clamored onto the local scene pledging edgy, experimental works. And it made good with creative programming like Frederick Wiseman's The Last Letter and Biljana Srbljanovic's Family Stories. Now that the company is vacating its Harvard Square location and founder Greg Carr has parted ways with director Tom Cole, the first crop of Market devotees may find themselves back at the A.R.T. 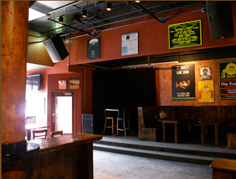