For years, Maxime has been on the mark with its cuts and color. But the salon's atmosphere never quite matched its high-end service. That changed when owner Ronit Enos relocated her team from Norwell to Hingham last year, choosing as her headquarters a brand-new, light-filled space decorated in a restful blend of creamy whites and earth tones. The new location creates a fresh backdrop for Maxime's long-standing artistry, a combination that's bound to please even the most exacting customer. 1 Derby St., Hingham, MA 2043, maximesalon.com.

Paula Tierney, A Matter of Face

Locating an eyelash in a haystack is easier than finding a local makeup artist with a light touch. Once you hop up on the hot seat, you're more likely to get the Elvira treatment. Enter sprightly stylist Paula Tierney. A little color in the brow ridge, a porcelain finish, a dusting of bronzer on the cheeks, and you're glowing, not garish. Tierney opened her shop in the North End a few years ago, much to the delight of city women seeking $35 pick-me-ups. 425 Hanover St., Boston, MA amatterofface.com.

Gone are the days of having to endure deep-tissue torture in order to feel terrific, thanks to the skills of master massage therapist David Costa. His touch is strong enough to relieve stress and aches, but soothing enough to remind you that you're at a spa. Costa's ACE treatment—a full-body exfoliation followed by a massage—is 80 minutes of pure bliss. 38 Newbury St., Boston, MA bellasante.com/. 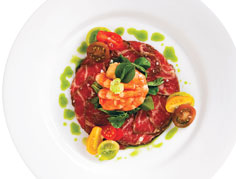 Carb addicts, allow us to introduce you to your downfall: Monk's Frites at the Publick House. A mere $6 gets you a shareable portion of hand-cut fries worth their weight in Yukon gold. These not-too-crispy, not-too-soft pommes are lightly dusted with sea salt, wrapped in a traditional Belgian paper cone, and finally served up with a choice of two homemade dipping sauces (we can't get enough of the fresh herb mayo and the truffle ketchup). 1648 Beacon St., Brookline, MA 2445, .

Word about its low-priced, generously portioned Sicilian fare got out a while ago, but dinner at this no-longer-hidden gem in East Somerville still makes you feel you're in on a well-kept secret. It could be because the no-frills dining room is set up in the back half of a corner store, where the handmade mafalda noodles are magnificent. Once you've feasted at Vinny's, you won't be able to resist boasting to all your foodie friends about your find. 76 Broadway, Somerville, MA vinnysatnight.com/.

With so many tacky taquerias representing what in reality is an extremely graceful cuisine, it's little wonder Americans rarely give Mexican food the credit it deserves. Which is where Casa Romero rushes in, with its menu full of smooth textures (the grilled shrimp with tomatillos and cilantro are at once piquant and soothing) and its energy, a balance between dramatic and intimate. The brightly tiled and brick-walled interior is a cozy delight, and the friendly, knowledgeable service only nudges the experience even closer toward elegance. 30 Gloucester St., Boston, MA casaromero.com.

To complement his "Adventurous American Cuisine," chef and owner Andy Husbands shook up an Adventurous version of the classic cocktail as a signature drink. As with any great margarita, the secret is hand-squeezed sour mix (none of that pre-mix swill) and a heaping dose of gold tequila, in this case Sauza. Replacing the triple sec with Grand Marnier doesn't hurt, either. 647 Tremont St., Boston, MA .

You may not be looking for anything in particular when you enter Midnight Farm, but once you lay eyes on its quirky and exotic collection of clothing, housewares, bedding, and gifts, you'll surely find an excuse to slap down your credit card. Co-owned by singer Carly Simon, the shop stocks ethereally scented lotions and body creams, soft-as-can-be knit outfits to cover some lucky baby's bottom, handmade shoes, and (of course) CDs and books signed by Simon. 18 Water-Cromwell Lane, Vineyard Haven, MA midnightfarm.net/.

In an area where the men's clothing selection has traditionally tended toward golf shirts and whale pants, Giblee's is a welcome departure. Italian merino wool sweaters from Bobby Jones share rack space with Hugo Boss leather jackets and Joseph Abboud three-button suits. The shop rounds out its stock with a selection of shoes from such makers as Alden and Bruno Magli and the latest watches from Swiss Army. All in all, definitive proof of life after seersucker. 85 Andover St., Danvers, MA giblees.com/.

With years of teaching under her belt, and a style that's at once soothing and energizing, it's no wonder Harvey has such a huge following. Her phenomenally popular neuromuscular integrative action class feels like MTV-meets-dance-therapy; it's a great workout regardless of your fitness level. Harvey is also great at modification, offering a class as challenging for advanced students as beginners. 140 Great Plain Ave., Wellesley, MA .

Known for turning out the area's finest photographers, NESOP also offers workshop classes that allow budding shutterbugs to get top training behind the lens. Once students pass the basic digital-camera and darkroom classes, they dig into studio lighting, portraiture, digital imaging, and street-photography courses, or even put together their own documentary project. Best of all: NESOP's classes include access to the school's top facilities, faculty, and exciting community of artists. 537 Commonwealth Ave., Boston, MA 2215, nesop.com.

When Doretta popped onto the scene, Michael Schlow fans puzzled over the uncharacteristically conservative menu—especially when compared with the fresh takes offered at nearby Pelekasis, Brendan Pelley's mod-Greek pop-up. So Schlow did what any pro would do: Once Pelley's temporary gig ended, he scooped him up as chef de cuisine. Together, they're a Hellenic dream team, slinging a perfectly calibrated mix of impeccable classics (charry lamb chops) and restless stunners (saganaki fondue with Sichuan peppercorns). 79 Park Plaza, Boston, MA 02116, dorettaboston.com.