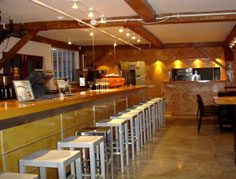 Order a burger at the Black Cow, and you may never fire up your Weber again. These handpacked 10-ounce patties are so juicy and flavorful, any attempt to imitate them on your own home grill is sure to come up short. It's hard to believe such flame-broiled babies are only 7 bucks ($8 with cheese), accompanied as they are by mountains of crisp, golden, diet-busting French fries. For maximum enjoyment, pair one with a cold Black Cow Blond Ale, then sit back to feel your iron count rise. 16 Bay Rd., South Hamilton, MA blackcowrestaurants.com/.

A couple of years ago, Warren Asnes was a bureaucrat in the state's Office of Human Services. But last year, he decided to become a full-time housewatcher—a move inspired by his musing whether he or the other occupant of a two-family home was responsible for filling the house's boiler. Today he'll tend to the care and feeding of your home while you're away by walking your dog, watering your plants, forwarding your mail, even stocking your refrigerator for your return—all for seven bucks a trip. He comes with references, is fully insured, and is not put off by large numbers of pets: he once baby-sat 34 cats. Newton, MA

Danny Wisel has found a new home and is once again cooking to his heart's content, which makes us very happy. 1314 Commonwealth Avenue, Boston, MA .

Jobless recovery or none, work still needs to get done: Telephones need to get answered, mail needs to be sorted, and bosses need to have someone to order around. Providing that work force is the raison d'être of Temporary Solution Staffing, which recruits aggressively, screens rigorously, and follows up with a rare level of attention to each assignment to make sure that the match was a good one. 540 Tremont St., Boston, MA .

Kind and gentle to your treasures. 870 Commonwealth Avenue, Boston, MA .

You can gripe until the cows come home about Boston's relative lack of great steakhouses, but until you've bitten into a richly marbled, truly succulent Delmonico at G23, you'll get little sympathy from us. Sure, it boasts all the requisite amenities of its genre—informed and prompt service, an exemplary wine list, sharp-as-a-tack martinis, and the scent of power wafting from table to table. But what elevates Grill 23 is its willingness to move beyond the hackneyed old boys' club formula. (With their overly wrought, stereotypically masculine décor, one has to wonder whether other steakhouses around town aren't compensating for something.) And the menu, while focused on the classics, dares to administer a creative twerk. 161 Berkeley St., Boston, MA grill23.com/. Who needs another trip to the beach when you can spend a sunny afternoon tackling rolling logs, ladders, and ziplines? The high ropes courses and trails at TreeTop Adventures are built for both experts and beginners, making it a great place for the whole family to get out of their comfort zone together. treetopcanton.com.

A dim attic in a Chinese restaurant may not shout "big laughs inside," but the Comedy Studio consistently delivers them. The room's long communal tables—and an audience lubricated with potent scorpion bowls—provide a perfect setting for seasoned pros to test new material, and for up-and-comers to hone their timing. 1238 Massachusetts Ave., Cambridge, MA 2138, thecomedystudio.com.

After a quick tête-à-tête, Brianna Coons shaped our unruly hair into something slick, taking into account our capacity for at-home styling (none). The best part? The chop grew out so evenly, it still looked fresh months later. 840 Summer St., South Boston, MA 2127, shagboston.com.