Step one: Buy an ideal piece of art. Step two: Find a framer you can trust. Good ones, like the professionals at the Frame Gallery, have an artist's eye, offer quality workmanship, and won't pressure you into spending more than you need to. You'll walk away with a well-priced, perfectly framed piece. 2 Summit Ave., Brookline, MA theframegallery.biz/.

No 'oaky' chardonnays and 'plummy' merlots here. The quaff hounds at this third-generation business call on a broader viticultural vocabulary in helping a customer discover the perfect bottle: 'Thought-provoking.' 'Animalistic.' 'Zany.' And they're as passionate about choosing their wines as their adjectives, traveling to craft vineyards worldwide in search of small-batch surprises like Sottimano Barbarescos and a cache of 2005 Rhônes. Stop in for a wine tasting or for a friendly one-on-one consult, and the word that'll come to mind is 'intoxicating.' 2366 Washington St. (Rte. 16), Newton Lower Falls, MA 2462, .

Thanks to this easygoing contemporary-art curator, the Gardner has maintained one of the most vibrant artist-in-residence programs in the U.S. No doubt Cavalchini's close relationship with director Anne Hawley has also helped shape the museum's new Renzo Piano-designed digs, which will give the city one very hip theater-in-the-round. 280 The Fenway, Boston, MA 2115, gardnermuseum.org.

Just when you thought fitness fads had reached their zenith, Helena and Brian Collins turned the notion of working out on its head. Forget long lines for treadmills, aerobic Amazons, and nightclub noise: Synergistics is a calm haven where trainers work one-on-one with clients. The Collins' approach to fitness uses sculpting, balancing, and strengthening programs in addition to Pilates, target eight training, and martial arts techniques. Brian is trained in the art of Huo Tuo Tui-Na, a massage therapy thought to alleviate migraines, lower back pain, and stress-related health problems. 9 Newbury Street, Boston, MA lifeinsynergy.com/. 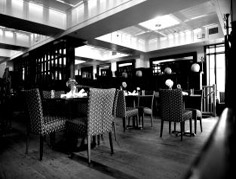 To those living in eternally up-and-coming Somerville: You may not have solved the public transportation quandary that is Union Square but, boy, are you lucky from a pub-hub perspective. Outfitted in the classy dark-wood stylings of a more upscale joint, the Independent is smartly cleaved into one room for drinkers, one for diners—and manages to do right by both groups. Expect well-executed, moderately priced cuisine, like the béchamel, cheddar, provolone, and Parmesan macaroni and cheese, as well as innovative drink offerings (such as the Sub Rosa: campari, lillet rouge, grapefruit-tarragon vodka, and soda water) that tickle more-alcohol-focused palates. 75 Union Sq., Somerville, MA 2143, theindo.com.

Raise a glass, if you will, to the ever-stunning Oak Bar. It's where sex appeal takes its post-prandial drink, where intimacy lounges in a long, cool black dress. It's where fascination sips a stiff Manhattan. There are mere mortals here, too, in everything from Levi's to tuxedos, huddled in conversation with one another, raiding the cigar-stocked humidor, slugging oysters from the raw bar, and soaking up the live jazz that oozes through the intricately detailed room. No matter who's filling it, the Oak Bar is simply one of the New World's most intoxicating Edwardian settings. 138 St. James Ave., Boston, MA fairmont.com/copley-plaza-boston/dining/oak-long-bar-kitchen/. 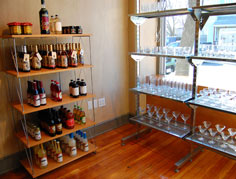 Most men appreciate a stiff one (we're talking drinks, people). And most men enjoy impressing others with their knowledge of crafting a good stiff one (please). Adam Lantheaume's recently expanded cocktail-supply shop, in a new Davis Square location, is like a candy store for mixology connoisseurs. Books about cocktails, handstitched ice-crushing bags, shaker tins, glasses of all shapes and eras, and a vast selection of garnishes help stock every man's dream bar. And hard-to-find ingredients like gum syrup and maple bitters will have him drunk with joy. 69 Holland St., Somerville, MA 2144, thebostonshaker.com.

Don't let the illusion of space from the many mirrors fool you—Chinatown's Grand Chau Chow, at least from the perspective of room to move, is not much grander than the original Chau Chow, its lower-rent sister across the street. The staff is not afraid to foster the idea that GCC is a family restaurant—chances are you'll be cozy enough with the next table to share dishes. There's one good reason for the popularity—the food, as the predominantly Chinese crowd will attest. The salted shrimp dish (fried, shell on, with spicy chilis) remains the one in town to beat. 41-45 Beach St., Boston, MA .

Given its Main Street address and wall of accolades from the likes of Wine Spectator and Zagat right inside the front door, there's no pretending La Campania is an undiscovered jewel. The beauty is, it still feels like one. Stepping into a rustic dining room glowing with candles and tiny winged lights, even regulars must sense a kind of secret privilege. The handmade staples—bread with cheese-and-pancetta strata, tender filled pastas—and gourmet Italian-inspired entrées are robust and delicate by turns, all complemented by a choice of more than 300 unique Italian wines. La Campania's a crowd-pleaser, to be sure, but one that comes off like a private affair. 504 Main St., Waltham, MA 2452, lacampania.com.

A veteran of Boston's theater scene, Steinbach exhibits astonishing versatility—and this year was one of her best yet. As a founding member of the Actors' Shakespeare Project, she played not one but two ancient kings: Nestor and Priam, in Troilus and Cressida. Then, when the Boston Playwrights' Theatre staged Deported, a dream play, Steinbach excelled as an Armenian-genocide survivor. But her biggest triumph was in the New Repertory Theatre's Collected Stories by Donald Margulies. That performance as an aging author betrayed by her protégé won her the Independent Reviewers of New England's best actress award. 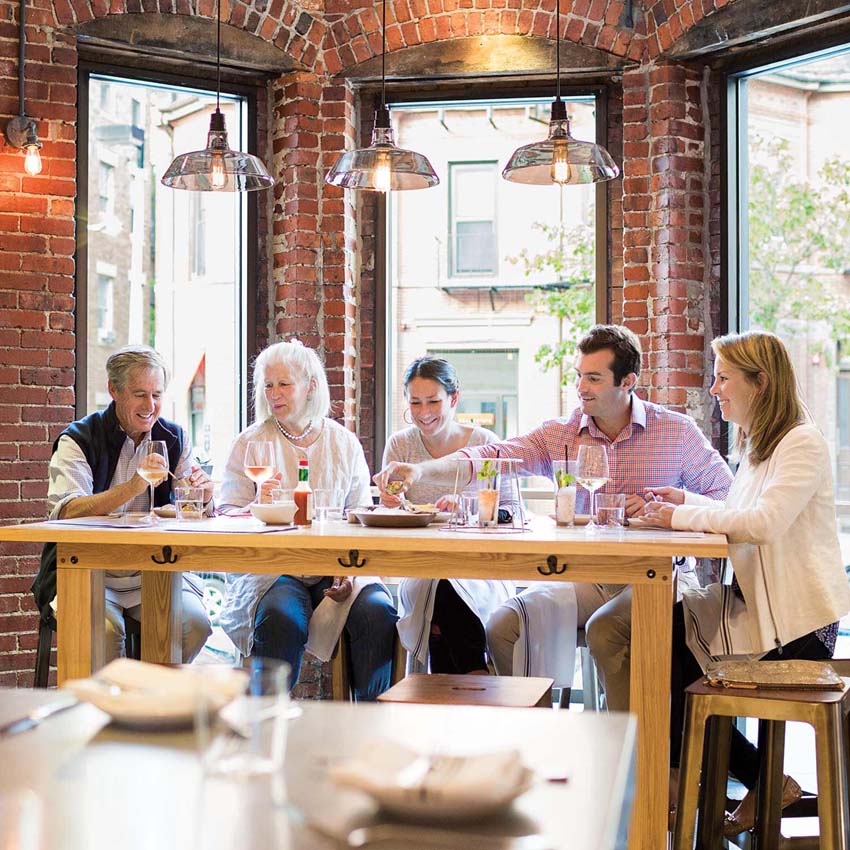 After seven years spent manning the tiny kitchen at Neptune Oyster, chef Michael Serpa stepped out on his own with another petite seafood spot. This one's a passion project, with Serpa's hands in everything from the quirky beverage selection (funky whites, Basque-style ciders) to the décor (posters featuring Jacques Cousteau and The Life Aquatic). The menu strays from clam-shack tropes in favor of creations like fried rice with cuttlefish, cuttlefish ink, and uni, which is even more delightful when enjoyed on the heated enclosed patio. 50 Gloucester St., Boston, MA 02115, selectboston.com.

Choosing a new pair of glasses or sunnies is one of the most difficult shopping tasks, second only to shopping for jeans. One glance in the mirror is hardly enough to determine whether you’ll like this new addition to your face next month—to say nothing of whether the style will still look au courant next year. Enter Spectacle, a small shop that sells logo-free, non-branded glasses in a bevy of timeless shapes and colors. Its 60-day exchange policy lets you actually live with your new look before making any major commitments. Imagine if the same rules applied to denim. 505 Tremont St., Boston, MA spectacle-eyeware.com.

If there's one swap that makes you think Dan Duquette maybe knows what he's been doing, it was letting Roger go and signing Pedro. Roger woke up, lost weight, and won two more Cy Young awards. At the All-Star break, Pedro led the league with the record (15-3), the lowest earned-run average, the most innings pitched, and most strikeouts—on his way to his second Cy Young award. Look at it another way: Subtract Pedro's record, and the Sox were one game below .500 at the All-Star break.

It's always the question when buying glasses—stick to the tried-and-true or dare for a new look? Eye Q not only has some of the trendiest new frames, they'll make it easier to take chances with a one-month, no-questions-asked exchange policy. To help you choose, members of the sales staff will offer their opinion and take an instant photo for you to share with friends. That level of service may be why musicians known for their eyewear—Kay Hanley of Letters to Cleo, for instance, and Aaron Perrino of the Sheila Divine—are loyal customers. New glasses won't make you into a rock star, but the attention lavished on you here might make you feel like one. 12 Eliot St., Cambridge, Boston, MA eye-q-optical.com/.