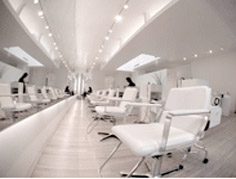 Jeffrey Dauksevich wants to take control of your hair. Here's why you should let him: Drawing on his two decades of experience, he still gives you the cut you really want, not the one ;he thinks you should try (in his chair, 'no bangs' means no bangs). Need some guidance? He's got suggestions aplenty. The results will be a stunning—if pricey—cut to outlast all the latest Hollywood hair fads. 75 Newbury St., Boston, MA 2116, umisite.com.

Anyone who has discovered the rewards of that fledgling and hybrid phenomenon called the medispa knows what makes a great one: equal parts medical knowledge, professional responsibility, and an eye for beauty. The staff at Beauty Therapies masters all three, and the result is a solid understanding of everything from how to prevent dehydration after microdermabrasion to the ideal way to replace collagen to nearly painless permanent laser hair removal. Not many spas this side of Switzerland can say as much. One Brookline Place, Suite 302, Brookline, MA .

Great hairstyling may transcend gender, but one fact remains: Men want different things from a haircut than women do. Just ask Rosie Salvador, who has perfected the equation for a perfect men's cut. Her friendly (but not overbearing) conversation helps pinpoint exactly what styles her clients want, her unfaltering precision delivers exactly those styles, and—above all—her smile assures her customers that they look fantastic. 37 Newbury St., Boston, MA dchristopher.com/.

Neighborhood characters and bleary-eyed medical students meet beneath a permanent haze of smoke at this rough-at-edges Mission Hill haunt, where everyone seems to know everyone else's name. On one recent evening, we heard a debate about the roots of genocide in the Mexican-American War overlapping with speculation about the most recent tabloid child abduction. Topping it off, a panhandler was scamming change in the men's room. Now, if that doesn't say "dive"...? 724 Huntington Ave., Mission Hill, MA .

When it comes to the steak-house experience, Grill 23 has it all—a cavernous men's clubby atmosphere, impeccable service, the kind of bar where one is apt to imbibe too many martinis, and, of course, great steaks. Non-carnivores need not despair: The grilled swordfish is superb and the kitchen turns out a terrific paella. Sommelier Alicia Towns expertly helps you navigate a first-rate wine list. 161 Berkeley St., Boston, MA .

When 9 to 5 becomes 9 to 9, takeout joints become a blessing. But how much hot-and-sour soup can one person eat? South End hot spot Flour now serves a handful of fresh meals to go, three nights a week, including roast pulled chicken with orange slices and green beans, and spicy stir-fried sesame-ginger noodles with tofu. Working late has never tasted so good. 1595 Washington St., Boston, MA flourbakery.com/.

If a neighborhood restaurant's first obligation is to genuinely reflect its setting, Big City is a high-shine mirror, taking Allston's collegiate culture and refining it by a notch or two. Sure, there's plenty of beer—one of the city's best selections, in fact—but it's handcrafted and from every corner of the globe. And while pizza and finger foods reign supreme, they come in such neo-gourmet renditions as spinach-artichoke dip and Mediterranean nachos with balsamic tomatoes. 138 Brighton Ave., Allston, MA .

Narrow, dark, and dingy, Tim's is hardly where you'd expect to come across one of this city's gastronomic standouts. But the kitchen here grills up the biggest, tastiest burgers you can imagine—no-frills, half-pound, juicy char-grilled numbers served on puffy bulky rolls. Throw in a good selection of affordable brews on tap, and it's easy to see what makes this honest man's oasis so popular with regulars and newcomers alike. 329 Columbus Ave., Boston, MA .

Spanish culture is bar culture, and a Spaniard knows no greater delight than pushing up against a crowd, glass in hand, and shouting for a pincho de tortilla. That's why the best place to eat like an Iberian is on a stool at Tapéo's bar. Skip the patio and the dining room. The same alluring tapas, from stuffed squid to boneless pheasant with mushrooms and jamón serrano, are served more sociably on the striking blue and yellow tiles. For added authenticity, forgo the tourist's tipple, sangria, in favor of one of the many Riojas. 266 Newbury St., Boston, MA tapeo.com.

This gem moves in for the three-peat, and not just for lack of contenders. Beacon Hill's prince of Persia still delivers attentive, congenial service, a solid wine selection, and exotic variations on standard meat and rice, such as the obscenely rich Fesenjan, made with duck and pomegranate. You might never trek to Persia. You might not even be able to find it on a map. But this Persian delight is only one door in from Charles Street. 97 Mt. Vernon St., Boston, MA .

From the moment we pulled up to the wrought-iron entrance, we were impressed. Set in a Back Bay townhouse decorated with fine paintings, L'Espalier is both a visual treat and a culinary one. Chef/ owner Frank McClelland turns out the finest French cuisine with creative accents. The service is formal and precise, the wine list is top-heavy but impressive, desserts are designed with care and expertise. Don't skip the excellent cheese course. 30 Glouster St., Boston, MA .

It might not be the first thing you'll smell walking down street, but a frappe from Bartley's may be an even better reason to stop in than the tantalizing aroma of frying beef. Between batches of Elvis burgers and sweet-potato fries, Mr. Bartley's turns out one of the most consistent, reliable, straw-pluggingly thick frappes around, beating tony Boston ice cream parlors hands down. 1246 Massachusetts Ave., Cambridge, MA .