Who knew brunch in a takeout box could be so sweet? Before escaping to the National Seashore, pick up some much-needed fuel at this restaurant and bakery with locations in Orleans and Eastham, which offers its beloved stacks of cinna- mon-roll pancakes and scallion-cheddar biscuits smothered in sausage gravy to go. Word to the wise: Whatever you get, don’t forget to add a dozen hand-cut doughnuts (including specials like blueberry crum- ble, s’mores, or Reese’s) to your order. 98 MA-6A, Orleans, MA 02653, theholecapecod.com.

Stow Acres is like the Tiger Woods of municipal courses. Not Tiger in 2004, but Tiger circa 1999, when he brought his A-game to every round. Originally opened in 1921 as a nine-holer, Stow now features two 18-hole courses, both designed by Geoffrey Cornish, including the North Course, acknowledged as one of the most challenging public courses in the nation. Off the greens, the club offers just about every golf option known, from lessons to a pro shop to corporate leagues to a lively 19th hole. 58 Randall Rd., Stow, MA stowacres.com. 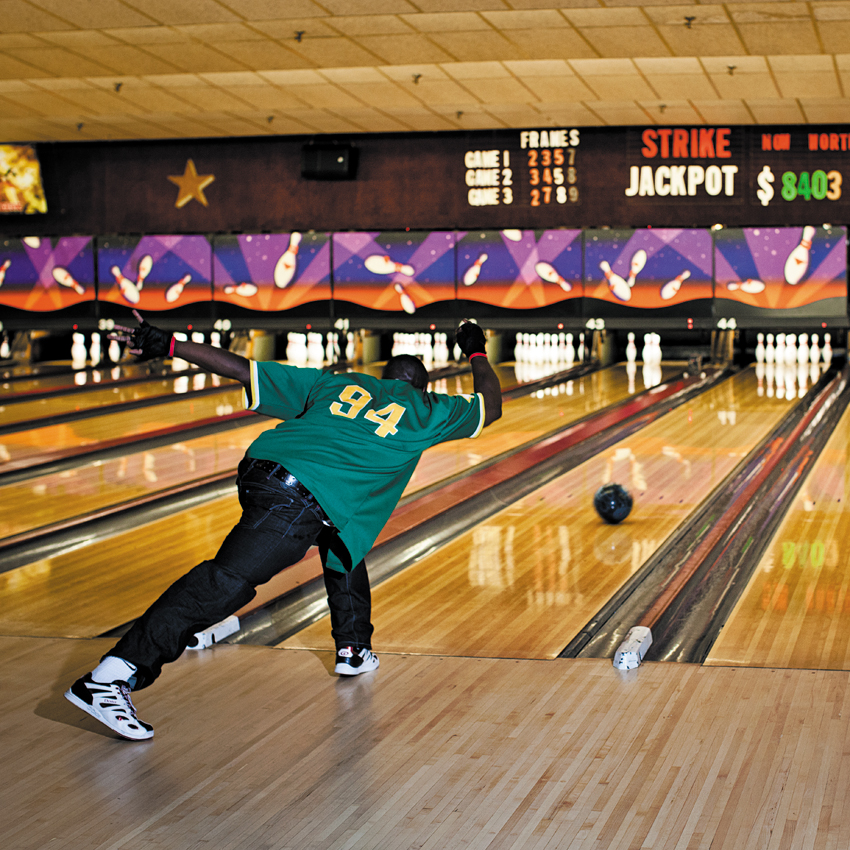 People outside of New England might not agree, but to be taken seriously around here, alleys have to offer both 10-pin bowling (big ball, finger holes) and candlepin bowling (small ball, no holes). Lanes & Games gets it right by providing a full floor of each, along with a bar that serves cheap eats and beer. No one will blame you for quoting The Big Lebowski at length. 195 Concord Tpke., Cambridge, MA lanesgames.com.

Just about every golf course in New England has pristine greens, little white balls, and plaid pants. What sets Waverly Oaks apart is the variety of its 9- and 18- hole courses. There's something for every kind of player here, with short and long holes, uphills and down, and doglegs both left and right. There's also enough room so that no one has to feel crammed—or as if they're on the business end of target practice. 444 Long Pond Rd., Plymouth, MA waverlyoaksgc.com/.

This seafood restaurant helped hatch the trend of democratizing caviar, once solely served on special occasions. Its caviar pairings—Belgian with Siberian, or Israeli with Royal Osetra—come with doughnut holes, blini pancakes made with white corn and Maine-sourced phytoplankton, or (during late-night service) one-bite “bumps” topped with buttermilk cream. 1030 Massachusetts Ave., Cambridge, MA waypointharvard.com.

He's not the only reason the Bruins have climbed out of their 1997 hole. But he's the biggest one and damn near the goaltender in hockey.

Looking for one-off interlopers from Prairie Artisan Ales or Transmitter Brewing? This East Cambridge shop has it all—with none of the annoying beer-geek brouhaha that saddles the most-tweeted releases. Over the past three years, Fabian Vasquez has transformed his family’s unassuming convenience store into the insider honey hole. 638 Cambridge St., East Cambridge, MA 02141, .

With a hole-in-the-wall atmosphere, raw jazz, and bartenders who bust ass, Wally's is an institution unto itself. A conglomerate of Berklee students, longtime barflies, and twentysomethings keep the narrow bar crowded, while early birds get a shot at one of eight tables. It's a tight fit, to be sure, but the vibe is lighthearted and appreciative. 425 Massachusetts Ave., Boston, MA 2118, wallyscafe.com.

It's definitely not a bar, though there's no shortage of beers. And it's not exactly a concert hall, but it knows how to pull in national acts and put on one hell of a show. Welcome to Once Somerville, a 9,000-square-foot venue of shape-shifting entertainment. Whatever happens to be on the calendar—Monday-night tacos, heavy-metal yoga, storytelling performances from the Moth—it's sure to beat the regular routine of draining a few pints at your local watering hole. 156 Highland Ave., Somerville, MA 02143, oncesomerville.com.

If designing outdoor spaces is both an art and a science, it follows that the portfolio of urban, rural, and coastal projects by Kimberly Mercurio—a trained landscape architect and ecologist—is the one to beat. With practices in Cambridge and Woods Hole, Mercurio counts a spruce-filled Falmouth yard with an infinity-edge pool and stone walls among her successes. 2 Mason St., Cambridge, MA 02138, kimberlymercurio.com.

Favored by some of the city's most discriminating boutique owners and clotheshorses, Dick Robasson is a stitch wizard straight out of another era. Holed up in his spartan Central Square space, with two sewing machines and a radio humming jazz in the background, the one-time Zegna staffer employs the same concentration when hemming pants as he does when whipping up a suit from scratch. 550 Massachusetts Avenue, Cambridge, MA 2139, .

Favored by some of the city's most discriminating boutique owners and clotheshorses, Dick Robasson is a stitch wizard straight out of another era. Holed up in his spartan Central Square space, with two sewing machines and a radio humming jazz in the background, the one-time Zegna staffer employs the same concentration when hemming pants as he does when whipping up a suit from scratch. 550 Massachusetts Ave., Cambridge, MA 2116, lecouturierma.com.

Pardon the pun, but this was one of the most hotly contested categories this year. Happily for burrito lovers, the city has several delicious options; sadly, only one can become the best. This Brookline newcomer, a spin-off of a cheerful little hole-in-the-wall in New York, specializes in the Tex-Mex variety: rice, beans, pico de gallo, and your choice of fillings, such as carne asada (marinated charbroiled steak), chili colorado (lean pork in a spicy guajillo-chili-pepper suace), or pollo (chicken in a red moule sauce)—all rolled in a fresh-flour tortilla. 3 Harvard Square, Brookline Village, MA .