You must enter a value into the award field or select year.
2011 Best Theater

The A.R.T. has added major buzz to its stages, from Amanda Palmer's work in Cabaret to a punk musical about Prometheus. Artistic director Diane Paulus has displayed the clout to bring in star turns by John Lithgow and Amy Brenneman, as well as the vision to produce the U.S. premiere of robot opera Death and the Powers, written by MIT prof Tod Machover. This is a theater that keeps your eye on the calendar for what's coming next. 64 Brattle St., Cambridge, MA 2138, americanrepertorytheatre.com. 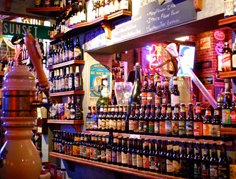 Just reading the beer menu at the Sunset is enough to make your head spin. At last count there were 100 brews on tap here, as well as 300-plus bottled beers. The selection ranges from the prosaic (Pilsner Urquell) to the obscure (Stone's Arrogant Bastard Ale) to the unpronounceable (the Gueuze 100% Lambic is said to be the champagne of beers). For connoisseurs, there's usually a cask-conditioned ale, like the popular Middle Ages' Wailing Wench; for the less discerning, there are the always-reliable Bud Light longnecks. 130 Brighton Ave., Allston, MA 2134, allstonsfinest.com. 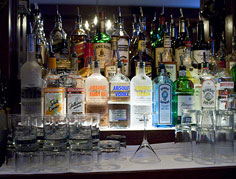 Much as we enjoy fighting for a bar stool with sunburned tourists and libidinous and over-lubricated college students, we do sometimes crave a slightly more civilized scene. 21 Federal, inside a classic Nantucket 1847 Greek Revival building, features a sophisticated downstairs bar and another cozy one upstairs. In-the-know Nantucketers congregate here for masterfully poured drinks; an award-winning wine list; good-looking, genial bartenders; and a crowd that knows how to have a stylish sort of fun. 21 Federal St., Boston, MA 21federal.com.

Push through the glass and wood storefront, past the bright pots of Trish McEvoy cosmetics and rows of neatly packaged Molton Brown potions (you can hit all of the above on your way out), and head straight for the heart of this operation: the spa. The intimate setting in back serves as the stage for some world-class pampering—whether it's a custom-designed massage at the hard-working hands of Amy Nicalek or a soul-saving pedicure. The entire staff works at the expert level. Better yet, they're downright sweet. 300 Boylston St. (Rte. 9), Atrium Mall, Chestnut Hill, MA grettacole.com/.

Glowing candles and a well-scrubbed interior may keep it more refined than your average fish shack, but Periwinkles' sea fare is straight-off-the-boat fresh. The crabmeat pie is a sweet and thick bit of retro revelry; the fresh lobster pizza on sourdough crust is tangy, filling, and scrumptious. Sitting on the deck perched over the Essex River at sunset, with an Ipswich Ale and a plate of grilled swordfish, provides an experience with which few places on earth can compete. 74 Main St., Essex, MA periwinklesrestaurant.com/.

It's not the fresh popcorn, hot cappuccino, or high-gloss neon that draws the crowds to this megaplex arthouse near MIT. Sure, those things don't hurt. But even if the seats weren't plush and the parking weren't plentiful, crowds would still flood to this theater for one of the largest selections of eye-sprinting subtitles on the East Coast. With nine screens of foreign and indie flicks, this is the place to catch an obscure tearjerker while boning up on your Czech or Urdu. 1 Kendall Square, Cambridge, MA .

The Roof at the Ritz-Carlton

Plan ahead if you want to trip the light fantastic at this, the city's chicest summer dinner-cum-dancing destination for those of us who outgrew Landsdowne Street years ago. Seating, especially for groups, is booked weeks, sometimes months, ahead. The good news is your alfresco evening will take place regardless of weather: A huge tent encloses tables, band, and dance floor, keeping well-coifed guests warm and dry. 15 Arlington St., Boston, MA .

1999 Best Place for a Romantic Tryst

Whether you're a movie star craving anonymity or a suburban couple looking to flee the rugrats for a night, the Lenox beckons with European elegance and discretion, meaning the doorman may know your name but he'll make sure nobody else does. Escape into the newly renovated (at a cost of $20 million) Back Bay jewel, with its imported crystal chandeliers, working fireplaces, lush carpeting, Victorian wallpaper, gilt-framed Italian, French, and English prints—and the fabulous Anago restaurant. 710 Boylston St., Boston, MA .

On the social faux pas scale, making a fool of yourself on the dance floor ranks second only to bad karaoke. And with dance so popular these days, your chances of blowing it publicly are increasing exponentially. What to do? Sign up for a class at the Boston Center for Adult Education, where sympathetic and experienced instructors will have you gliding like Astaire in a matter of weeks—for under $100. And you don't have to have a partner to enroll. 5 Commonwealth Ave., Boston, MA .

Next to a terrific moviehouse and a great coffeeshop, Casablanca is your best bet for a bar where you can actually have a conversation. Faux Middle Eastern decor, amusing Humphrey Bogart murals, Billie Holiday on the jukebox, an eclectic assortment of Left Bank literati, and odd little rick-shaw-like seats contribute to an overall pleasant vibe. 40 Brattle Street, Cambridge, MA .

Okay, so Paul Janovitz of Cold Water Flat is the brother of Buffalo Tom's Bill Janovitz. There's no sibling rivalry going on here. Buffalo Tom may have captured MTV and My So-Called Life, but CWF's new CD on a major label and opening appearances on Belly's worldwide tour last spring have garnered the group more than its fair share of attention. Look for them on Conan this fall.

A year-round locals’ favorite, Island Kitchen expanded in 2017, adding a patio bar and a counter serving house-made ice cream and doughnuts in varieties such as maple bacon and Mexican chocolate. But you may have to forgo the sweet stuff after feasting on chef-owner Patrick Ridge’s inspired breakfast and brunch fare: panko-crusted eggs Benedict, apple-bacon-blue-cheese omelets, turkey hash, and fine finnan haddie, preferably washed down by mimosas made with always-fresh-squeezed OJ. One Chin’s Way, Nantucket, MA 02554, nantucketislandkitchen.com.

Shutterbug and makeup artist extraordinaire Rachael Rubin has relocated her industrial-chic salon/photo studio concept to an 11,000-square-foot location in the same loft building, adding a full roster of spa treatments to her menu of services (think: microblading, reiki, lash extensions, and the very best blowout around). Bonus points for the chance to strike your best model pose after a day of pampering. One Watson Place, Framingham, MA 01701, theparlr.com.

If you’re paying someone to pour hot wax on a (ahem) sensitive body part, wouldn’t it be great if that person had medical experience in addition to beauty expertise? Ari Neuman not only knows a ton about skin care, but she also used to work as a surgical assistant in the OBGYN department at Beth Israel—she has the bedside manner and attention to detail of a medical professional, too, making a typically awkward experience more bearable and—dare we say?—almost relaxing. 485 Commonwealth Ave., Boston, MA 02215, swayspa.com.