You must enter a value into the award field or select year.
2008 Best New Restaurant, South

Lean, yeasty crust dotted with a few rounds of mozzarella is not what you'll find at Lynwood Café; A South Shore specialty, 'bar pizza' trades on piles of gooey cheese and rich, fatty dough, and this Randolph dive serves the finest around. Plywood walls, flickering beer signs, and Formica tables coalesce to create the ideal ambiance for devouring a hamburger-linguine; pie, washed down with a cold draft. Bring cash, and pass up the 'extra cheese' option on the 12-item menu: Your palate—and heart—can take only so much. 320 Center St., Randolph, MA 2368, . 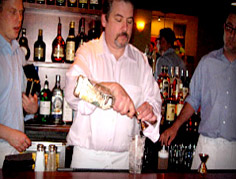 Looking for the city's top bartenders on their night off? They're probably knocking 'em back right here in Central Square, along with anyone else who puts a premium on creative, classically prepared libations. Powerhouse mixologists Misty Kalkofen and Andy McNeese stand ready to pour any of the 100 options on Green Street's drink menu, many being a clever twist on vintage recipes. Try the Cocktail Miranda, a takeoff on the Manhattan, or one of the well-shaken egg (!) cocktails, like Kalkofen's original Fort Washington Flip. If you're looking to play things straight, there's also a smartly curated list of wine and beer. 280 Green St., Cambridge, MA 2139, greenstreetgrill.com.

Why do we bestow this award, year after year, on Tosca? Simple: No other restaurant in the area manages to be so many things to so many diners, and with such class. Want a romantic evening? Reserve a corner table under the restaurant's soaring ceilings. Got a big-deal dinner with friends? The unpretentious but professional service will make sure it goes off hitch-free. Seeking a foodie adventure? The bright, local flavors of chef Kevin Long's menu will wow your palate. All of which is why we can't—and wouldn't want to—stop going back. 14 North St., Hingham, MA 2043, toscahingham.com.

Everyone knows the motto—"If it isn't fresh, it isn't legal"—but did you know that Legal Sea Foods actually started out 50 years ago as a seafood company, not the chain of restaurants we think of today? In keeping with that tradition, Legal buyers don't use brokers or middlemen, and they grab the choicest catch straight from the ocean. The two fish markets showcase anything you could want from the sea, and even offer ready-to-eat items such as clam chowder and fried shrimp. With its in-house microbiology laboratory and eight-step process that screens for bacteria, Legal guarantees the quality of its merchandise. 33 Everett Street, Allston, MA legalseafoods.com. 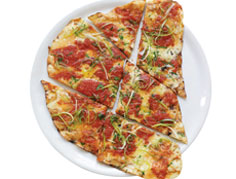 Okay, so the guy went and named a restaurant after himself. Clearly, chef Dante de Magistris is focusing his subtlety elsewhere—on, for example, his nuanced dishes. In actuality, each is served with a side of humility; he and his brother Filippo are in the house most nights, seeing to it that the eatery is far less about fanfare than about making regulars out of newcomers. The offerings range from humble (arancini with truffle honey) to homey (handmade gnocchi with pancetta, almonds, and pecorino), and by virtue of the high-quality ingredients (bavette steak with truffled cauliflower), ultimately soar. 40 Edwin H Land Blvd, Cambridge, MA 2141, restaurantdante.com.

When Ed's father, Henry, started the business in 1927, his equipment consisted of one horse and one buggy. Today, the list reads: seven vans, four trailer trucks, two pickups, two cranes, and a thirty-thousand-square-foot warehouse. Affiliated with Global Van Lines, Owens Movers (129 Sherman St., Cambridge, 876-8390) will handle everything from moving large companies (Prudential and Gillette have been moving their customers) to moving pianos (a specialty). "Even so," Ed Owens says, "we're a small, union firm, basically a father-and-son operation. We're honest with folks. We have more to lose, and everything to gain." Owens Movers, 129 Sherman St., Cambridge, MA 617-876-8390.

At first glance, Cargill has the right résumé: He started at Cheers. Of course, he was only parking cars. Now behind the bar at a more upscale and off-the-beaten-path location, the Newburyport native has quietly made a name for himself, especially for his mojitos. (He's got the muddler's callous to prove it.) But he's equally adept at martinis or whatever might be your highball poison. Cargill's laid-back charisma and cackling laugh perfectly match Chez Henri's easygoing French-Cuban vibe, and his knack for creative mixology produces concoctions that would bowl over even Norm Peterson. One Shepard St., Cambridge, MA chezhenri.com/.

First, a point of order: A proper martini will never, ever be preceded by an adjective. Not chocolate, not raspberry, not blue velvet, not anything. Except, of course, for the words "extremely dry." Nor shall a martini be bastardized with vodka. Only gin, please, with a mere whisper of vermouth, straight up and very cold. That said, we're left with a dilemma—namely, how to choose the glass of cold gin. Presentation and atmosphere are the only criteria left. The Bristol Lounge, with its comfy seats, warm nuts, and an upscale yet unpretentious and definitely unstuffy ambience, is the perfect martini arena. Pricey, yes. But tableside pouring from chilled shakers costs money, you know. Four Seasons Hotel, 200 Boylston St., Boston, MA .

Not quite a year old, Union has managed to root itself so deeply into South End culture, you'd think it has been around for decades. What's the secret? We suspect it has something to do with co-owner Jeff Gates' genial nature, executive sous chef Josh Steinberg's steady hand with mostly local ingredients, and bartenders who know their way around the many bottles they shake, chill, and pour with such profound dexterity. Or maybe it's simply Union's mix of unpretentiousness and sophistication. Whatever the draw, few who drop into Union can resist coming back—and fewer still believe it isn't here to stay. 1357 Washington St., Boston, MA unionrestaurant.com.

A good rule of thumb for determining whether or not a restaurant serves authentic Mexican cuisine is to scan its menu for ceviche, pozole, flan, and café de olla. Casa Romero, tucked into a tiny Back Bay alleyway, has all four, as well as nicely executed traditional main courses such as enchiladas, verde or poblano; chicken mole; and tenderloin of pork marinated in orange and smoked chipotle peppers. The margaritas are tasty; the service is, well, serviceable enough; and the atmosphere, mellow and intimate. Hit Casa Romero during summer and you can dine in its lovely courtyard. 30 Gloucester St., Boston, MA casaromero.com/.

You must take seriously any soup shop that boasts "Triple Strength Chicken Vegetable Available Daily." The Factory means business, with four alternating selections of more than 75 varieties every day. Cool down on a summer evening with a chilled bowl of Blueberry Peach or serve some Gazpacho to guests. When winter rolls around, be ready with Hot Carrot and Ginger, Double Onion with Sherry, or Classic Lentil. The only Soup Nazi-esque thing about this place is the price: a slightly steep $4.25 for a 12 oz. bowl. 2-4 Brookline Place, Brookline, MA .

For the healthy: blackened tuna sashimi. For the daring: wasabi-crusted salmon. And for the hungry: a lobster roll that's meaty, chunky, and sweet. No matter what your palate craves from the sea, Skipjack's probably serves it, and serves it well. This year, the Newton and Natick branches of the three-restaurant chain even began to feature sushi, from hearty lobster maki rolls to thin-sliced tuna sashimi. Or bypass the raw and head straight for the cooked—everything is flapping-fresh and runs from the creative (mahi-mahi grilled to perfection, then smothered in a peach pepper salsa) to the traditional. (The Boston clam chowder is a rich meal unto itself.) 55 Needham St., Newton, MA skipjacks.com/.

Born from the civic altruism that also created the Emerald Necklace, Revere Beach was the first public beach in America, and thanks to a centennial restoration that began in 1996, it's again one of the best. The bathhouses might still be funky and the surrounding apartment buildings can be eyesores, but the bandstand is spiffed up, and the sand and water are clean, making the nearly three-mile crescent lapped by the Atlantic one of New England's most beautiful beaches. If it were in Rio, there would be a song about it. Where else can you watch 747s set down like giant birds as you do the backstroke, or forgo your summer potboiler to read the tattoos on passerby? If Revere is the people's beach, then power to the people. Revere Beach Boulevard, Revere, MA . 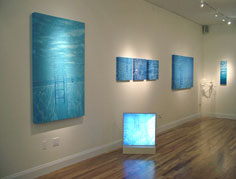 Local masterpiece-mongers tend to deal in one of two extremes: jejune still-lifes geared to designers who spruce up Back Bay sunrooms, or sprawling esoterica that cause poseurs to start lusting for home-display space. Hewing a noble path between pear paintings and "environments," Lanoue focuses on established artists who tackle traditional genres—portraits, landscapes, even floral studies—with modern flair. Though varied in style, the monthly exhibitions all balance craftsmanship with conceptual edge, requiring neither advanced degree nor audio tour to blow you away. 125 Newbury St., Boston, MA 2116, lanouefineart.com.

Sometimes pushing a stroller through the mall feels like navigating a herd of wildebeest; an afternoon at the playground, like dodging wild chimpanzees. On these days, wise parents escape to more civilized environs—namely, this parklike turn-of-the-century zoo, which offers 72 acres' worth of roaming room. The recently renovated gorilla exhibit and the addition of two magnificent tigers have the zoo looking better than ever. And it has lots of kid-friendly food options and convenient diaper-changing stations to help keep your own little critter happy. 1 Franklin Park Road, Boston, MA 2121, zoonewengland.com.