You must enter a value into the award field or select year.
1996 Best Tour, Eco-Friendly

Robert Gaston of Cambridge Kayak Company is putting together a sea-kayak trail stretching from northern to southern Massachusetts. Kayaker-friendly bed and breakfasts and waterfront restaurants will welcome weary travelers along the way; the tourist dollars, Gaston hopes, will encourage environmental awareness. That's the long-term plan. The short-term plan is to put together an ace team of kayak instructors and tour leaders for the summer, a venture in which Gaston is joined by Tony Simpson, an energetic British Canoe Union instructor. Cambridge, MA

Forget the Ducks. The cultural, historic, and aesthetic richness of this city is in safer hands with the likes of Ed Gordon. He's an architectural buff who likes showing off undiscovered neighborhoods and his tours are heavy on anecdotes about how real people lived "back then," but he also points out the best shopping and nightlife. During one of his 1938 hours of the Combat Zone, Gordon was punched in the stomach by a stranger on the street. He got up, dusted himself off, and continued talking.

Great way to set out for an afternoon's sail at great prices. The Esplanade, Boston, MA .

Let's face it, Boston's a walking town; buy into a pricey gimmick tour, and you'll spend half the time stuck in traffic. At Boston By Foot, though, the guides are volunteers; you pick your thematic pleasure (seven tours cover everything from the Freedom Trail to Victorian Back Bay, Beacon Hill, or the popular "Boston Underground," about the engineering of the subway and the Big Dig); and of all you avoid congestion, get exercise, and learn about Boston all at once. 77 N. Washington St., Boston, MA .

Since what's traditionally known as happy hour is illegal in our great state, local establishments have been forced to get creative with the concept. Grendel's, housed in a funky basement space in Harvard Square, puts the best spin on things: Besides the substantial beer selection and surprisingly good sangria, from 5 to 7:30 p.m. all food—a hearty mix of international specialties—is half off when you buy a drink. 89 Winthrop St., Cambridge, MA grendelsden.com.

Top of the Hub

When your pad needs some tender loving care, call on Maid Pro. Ask for Blanca; she was able to turn our test flophouse into a glistening palace in less than four hours. 25 Myrtle St., Boston, MA .

Simple, homey, and good. This is what all North End restaurants should be. 11 Parmenter Street, Boston, MA .

The fourth member of our party was late. Family-emergency late. Should've-canceled late. An hour into our reservation, we approached GM (and co-owner) Kerri Foley: We didn't know how much longer our friend would be. Did we need to move? No, she said, smiling, it's fine. Meanwhile, our waiter refilled our water glasses, explained the wine list, poured some samples, and stood by politely until our dinner party was complete. Such moments test the true colors of a front-of-house team, and Foley's staffers—admirably polished and gracious—passed with theirs flying. 75 Charles St. South, Boston, MA 2114, pigalleboston.com. 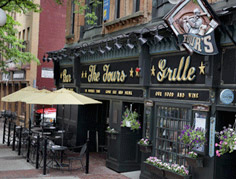 Until the Celtics ended the long drought for the Garden's resident teams, there wasn't much cause for hanging around the arena to throw back beers. But with the C's generating excitement the likes of which haven't been seen since Larry Bird hung up his mustache, Canal Street was reborn this year—and so, too, was the Fours. It's not as big as some other venues, and that's what makes it so appealing: squeezing elbow-to-elbow into a crush of like-minded revelers, Sam Adams in hand, throatily cheering on the local boys. There isn't another bar in town this good at producing the we're-all-in-it-together spirit. And since the Fours carries the major sports packages on more than 40 strategically placed televisions, no neck-craning is required to watch the game. 166 Canal St., Boston, MA 2114, thefours.com.

We admit it felt a bit dodgy getting highlights so far from Newbury Street. But our gamble was rewarded. The stylists at the newly renamed JParave (formerly Janeen's) are professional, amiable, and attitude-free. Plus, they know you don't want to while away your prime tanning hours inside, so they will have you colored, cut, and blow-dried in the time it takes your mani-pedi from the in-house nail salon to dry. One North Beach St., Nantucket, MA 2554, jparave.com.

The terrific hors d'oeuvres, convivial drinkers, and cheap prices help make up for the fact that the bartender's a machine. 60 State St., Boston, MA . 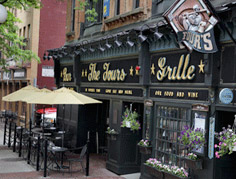 The most important thing in the most important sports town in America is, aside from victory itself, finding the right place to soak up all the action. If you can't be courtside or behind home plate, that place is the Fours, the venerable North Station sports bar that's as classic as Fenway turf and Garden parquet. Whereas newer suds-and-scores hangouts tend to come wallpapered in TVs (leaving us feeling as if we're trapped in a Best Buy), the Fours leaves ample room for signed jerseys, vintage game photos, and other memorabilia it's accumulated in its 30-odd years. Adding to the ambiance: Many a sports scribe and team executive have been known to tip back a glass here after a game at next-door neighbor TD Garden. 166 Canal St., Boston, MA 2114, thefours.com.