You must enter a value into the award field or select year.
2018 Best Pizza

Think of the Publick House less as a bar, and more as a library stocked with craft Belgians. You’ll even get an education, thanks to beer-nerd staffers. 1648 Beacon St., Washington Square, MA 2445, thepublickhousebeerbar.com.

Thirty years is a long time in the music business, particularly when you're still vending vinyl in the age of iTunes. But with hundreds of thousands of records, CDs, and eight-tracks stacked in a subterranean space, In Your Ear's Boston location has flourished since 1982. You can search the inventory online—albums are graded by condition—but trust us: It's more fun to dig through the crates. 957 Commonwealth Ave., Boston, MA 2215, iye.com.

In the beginning, there was House of Siam's Chicken with Basil, and it was the best. Subsequent visits introduced us to their pad thai, which gives Jae's a run for its money, and interesting seafood dishes such as Diamond Mine, consisting of sea scallops, bamboo shoots, and baby corn in a hot chili sauce. The food is consistently excellent: everything is very fresh and cooked to order, with most dishes leaning toward spicy but easily modified with a request. 542 Columbus Ave., Boston, MA .

Brunch-goers are often faced with a choice of sweet versus salty. At the Coach House, they don't have to pick. The restaurant's Sunday brunch buffet has everything from fluffy French toast to chef Ryan Hardy's signature cheeses. The water views are stunning and the charming staff encourages you to try it all—not that you'll need any prodding. 131 N. Water St., Edgartown, MA harbor-view.com/.

No more settling for a dress you only "sort of" like. With the help of the computer at House of Design, the fabric, sleeves, bodice, buttons, and details of your dress are all your decisions. One Design Center Place, Suite 634, Boston, MA .

This monastic pub is ;the place to earn an advanced degree in artisanal ales (or just keep pace with the craft-beer aficionados in your life). The bartenders and servers know their hops and malts in exquisite detail, and will happily enlighten you (sans condescension) as to the difference between a ;dubbel and a ;tripel. And every draft, from a local standby to the rarest Belgian brew, is served in its proper glassware, revealing an unparalleled adoration for man's oldest liquid creation. 1648 Beacon St., Brookline, MA 2445, publickhouse.com.

At Brookline's artisan-suds mecca, a vintage Son Volt tour tee will get you further with the aging hipster crowd than any designer finery; let it slip that you grow your own hops, and you might very well seal the deal. 1648 Beacon St., Brookline, MA 2445, .

An old-school record store that drowns out the download age by cultivating loyal customers and an understated cool you can't buy on iTunes, In Your Ear caps one of the city's best vinyl collections with a superior trove of classical music CDs. It also draws audiophiles with a surprisingly deep selection of reel-to-reel tapes, manufacturer-sealed Pink Floyd and Eagles LPs, and an intriguing mélange of minidiscs. 957 Commonwealth Ave., Boston, MA 2215, .

Despite what your chowhound friends tell you, it is not true that the quality of an ethnic restaurant falls as its sanitation scores rise. And it's certainly not the case at House of Siam, where cream-colored tablecloths, scarlet walls, and golden Buddhas decorate the split-level dining room. The curries are spiced to order (we like the massaman with shrimp), and the wine list is unusually thorough. Settle into a window seat and toast your chicken dang dang with a bottle of Veuve Clicquot. 542 Columbus Ave., Boston, MA 2118, houseofsiam.com.

Michael Leviton's Cambridge venture is many things to many people: a morning latte-and-breakfast-sandwich stop for local tech gurus; a de facto study hall for MIT students; a casual spot for friends to catch up over a crispy potato-and-pancetta pizza and a couple of glasses of wine. Despite the crowds, though, Area Four maintains a warm, neighborhoody vibe. 500 Technology Square, Cambridge, MA 2139, areafour.com.

For years we lamented the lack of quality Korean dining in this town. Once Manna House opened its doors, those complaints thankfully came to an end. Now we can dig into tender bulgogi beef and sesame-oil-slicked jop-chae (sweet potato noodles), plus Chinese-influenced dishes like jajangmyeon (noodles with black soybean paste and diced pork) and kan pung gi (lightly fried chicken with a sweet and spicy glaze). And to think that once upon a time, all of this was just a dream. 9 Medford St., Arlington, MA 2476, mannahouse-cuisine.com. 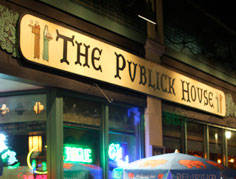 How many beers does this place have, anyway? 100? 200? Who knows. The suds menu changes all the time at the Publick House (though the Belgians always make an appearance). But more than the awe-inspiring selection, the care with which this Brookline mainstay chooses its brews makes it a treasure. 'Artisanal' is the operative word here and yes, that does translate to 'expensive.' But it also means you'll discover uncommon selections like Aphrodisiaque, a chocolaty, light-bodied beer from Brasserie Dieu du Ciel in Montreal. 1648 Beacon St., Brookline, MA 2445, .