You must enter a value into the award field or select year.
1980 Best Bloody Mary

Actually, the Bull & Finch Pub in the basement. Very tasty, with a fair amount of vodka. 84 Beacon St., Boston, MA .

They've changed the name, but the drink remains the same—the finest in Boston, with just a hint of horseradish and garlic. 84 Beacon St., Boston, MA .

It doesn't get sweeter than Four Seas, where flavor favorites include lemon crisp and peach, and homemade toppings range from Melba sauce to crème de menthe. Best of all: You can eat your treat knowing your tips are put toward college funds for employees, all of whom are required by the owner to maintain good grades. 360 South Main St., Centerville, MA fourseasicecream.com/.

The patio at this island institution is prime people-watching real estate, but it's the food that keeps us coming back season after season. The brioche doughnuts coated with bourbon-caramel sauce and bacon sugar are a must, but there are lots of other treats to choose from: buttermilk-fried chicken, waffles with pecan butter and bourbon-maple syrup, bacon-infused bloody marys, and warm, hangover-easing chocolate chip cookies. 12 Federal St., Nantucket, MA boardinghousenantucket.com.

Islanders and visitors alike have been buzzing about the recently opened Greydon House, and for good reason. A visual stunner featuring handpainted tiles and custom Roman and Williams furnishings, the 18-room boutique inn boasts common areas infused with a flora-inspired signature scent (which you can take home as a souvenir) and an on-site bar and bistro overseen by Michelin-starred chef Marcus Gleadow-Ware. 17 Broad St., Nantucket, MA 2554, greydonhouse.com.

We know: Newbury Comics has basically become a streetwear boutique, while shops like Orpheus and Armageddon respectively focus on niche audiences for classical or punk and metal discs. For a comprehensive selection, nothing beats the unchanging In Your Ear “Mothership” location, situated in a basement between the Paradise Rock Club and BU’s Agganis Arena. Stocking more than 100,000 LPs, CDs, and even 8-tracks, the store gives collectors (and rock legends like Jimmy Page) that priceless, digging-in-the-crates experience where you’ll find what you came for, and leave with much more. 957 Commonwealth Ave., Boston, MA 02215, iye.com.

Like sitting on a South End patio, you'll see everyone during weekend brunch here. People-watching aside, the covered, fenced-in Federal Street terrace is also a cool and shady spot to take in Seth and Angela Raynor's outstanding service and locally sourced fare. Go sweet on pillowy house-made brioche doughnuts and soufflé pancakes, or ease into the day with a savory grilled pizzetta topped with fontina, arugula, and prosciutto. Whichever way you go, the BoHo's classic bloody mary is a must. 12 Federal St., Nantucket, MA 2554, boardinghousenantucket.com.

Tucked away between Kenmore and the Back Bay on the quiet end of Bay State Road, this 1895 brownstone has been restored to a grand late-Victorian style—although the Victorians didn't have air-conditioning, 27-inch televisions, and Ethernet connections to the Web. Wet bars and refrigerators in every room almost qualify the eight spacious suites as studio apartments. (Many are bigger than a lot of Boston studios.) North Tower has the views of the Charles River, while Morningside is splashed the light from east-facing bay windows. 9 Bay State Rd., Boston, MA innboston.com/.

Costas Xanthopoulous has the seamy side of life all sewn up. 1616 Beacon St., Brookline, MA . 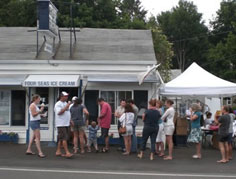 Compared to, say, Ben & Jerry's, the list of flavors at this Centerville favorite doesn't seem particularly innovative. But Four Seas, which has been in business since 1934, was the first to come up with such then-brilliant ideas as adding chocolate chips to a vanilla base. They still do homemade chocolate chip, maple walnut, penuche, and fresh strawberry better than anyone around. 360 S. Main St., Centerville, MA 2632, fourseasicecream.com. 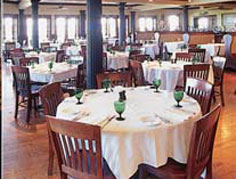 The Coach House has always beckoned diners with its open-air seating and Edgartown Harbor views. Now there's another reason to eat at this harbor-view spot: New chef Joshua Hollinger (formerly of Manhattan's Tribeca Grill) has taken over the kitchen and revamped its lunch and dinner menus. But his real triumph is the Sunday brunch. Delicacies like sushi and boutique chocolates join an already impressive menu of berried French toast, eggs Benedict, and myriad savory salads. You may even find yourself forgoing the vista of passing sailboats to stare at the buffet instead. 131 North Water St., Edgartown, MA 2539, harbor-view.com.

Since it reopened with The Lion King last year, the restored Opera House hasn't drawn the most inspiring of productions. But it does look great. The 2,600-seat theater is a jewel from the dying days of vaudeville, and it gleams with the sort of Beaux Arts gilt that ought to shame more-modern buildings: chandeliers, murals, even period-style urinals. Now if we could only get some shows to match . . . 539 Washington St., Boston, MA bostonoperahouseonline.com/.

The only downside to fake lashes is that they often look, well, fake. But when Andrea Starr is the one painstakingly applying length to our lids, we believe. After an appointment with the former LuxLash manager, you'll enjoy your new fringe for four to six weeks with minimal maintenance and nary a mascara tube in sight. 170 Commonwealth Ave., Boston, MA 2116, eyestarr.com.