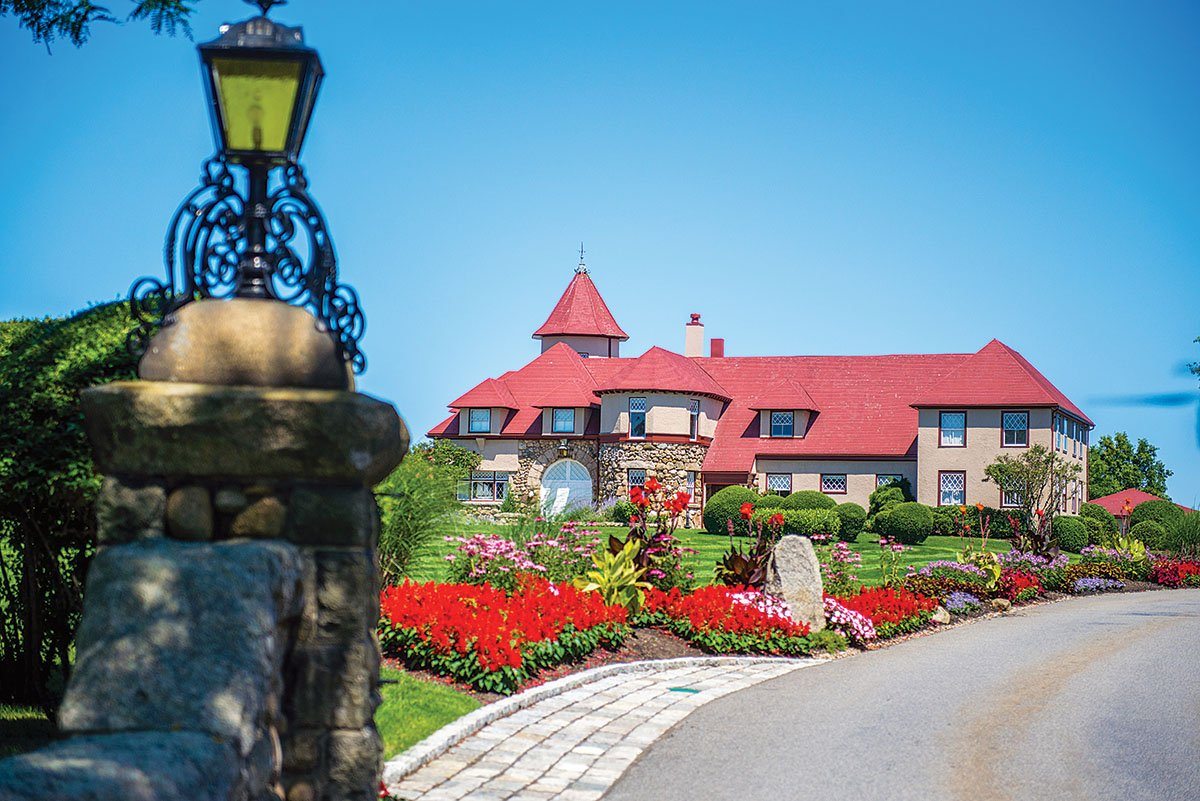 While it’s hard to unwind these days, this luxe resort is making it a little easier to get some much-needed R & R. Extra pre- cautions—including contactless golf-cart pickup, grocery-delivery service, and reduced capacity at pools and at Ocean Edge’s private beach—provide peace of mind, while new private experiences such as beach yoga and oyster tours make it easy to practice social distancing while giving the kiddos an unforgettable adven- ture. So go ahead, book that luxurious mansion suite. Boozy mudslides delivered straight to your beach chair await. 2907 Main St., Brewster, MA 02631, oceanedge.com.

Raise a glass, if you will, to the ever-stunning Oak Bar. It's where sex appeal takes its post-prandial drink, where intimacy lounges in a long, cool black dress. It's where fascination sips a stiff Manhattan. There are mere mortals here, too, in everything from Levi's to tuxedos, huddled in conversation with one another, raiding the cigar-stocked humidor, slugging oysters from the raw bar, and soaking up the live jazz that oozes through the intricately detailed room. No matter who's filling it, the Oak Bar is simply one of the New World's most intoxicating Edwardian settings. 138 St. James Ave., Boston, MA fairmont.com/copley-plaza-boston/dining/oak-long-bar-kitchen/.

The dish is hot crab-and-cheese dip, and it goes a little something like this: chunks of tender, sweet blue crab tossed with heavy cream and supersharp cheddar, then wood-fired to a roof-of-mouth-scorching sizzle. After that, the menu at this guilty-pleasure oasis is your oyster. Or your goat cheese-slathered wild mushroom pizza. Or your flaky chicken potpie with a scrumptious baked side of three-cheese macaroni. The elegant setting is so picturesque you could have your wedding reception here—so long as you let out the dress first. 1217 Main St., Hingham, MA 2043, scarlettoaktavern.com.

The service is knowledgeable, attentive, and friendly. The menu is smart and eclectic. And the kitchen keeps a keen eye out for the fresh ingredients of the season—just as it should. The fried oysters in a cornmeal batter are terrific (and served with a crisp jicama-pepper slaw), and Claremont's signature crab cakes have a wonderful seared crusty exterior encasing juicy, succulent crabmeat. A modest, but sensible wine list. Nothing fancy here—just excellent food, reasonable prices, and a refreshing appreciation of fine cooking—with no pretense. Claremont has become a fixture in the South End because it's the kind of neighborhood place you go back to again and again. We do. 535 Columbus Ave., Boston, MA .

Oysters (from both coasts) are the draw here, especially from 9 to 11:45 p.m. on Thursdays, when they're a buck a shuck. But discerning diners also come for the mix of casual and luxe offerings—clam-and-pork-belly chowder; crudo dressed with charred-lime vinaigrette; prime rib-eye steaks; and even caviar service. The space is cozy, with sleek pendant lights and a long Carrera-marble bar that give it the same cool quotient found at its sister restaurant, Ceia Kitchen + Bar, just across the street. 25 State St., Newburyport, MA brineoyster.com.

When J. B. Blau, owner of Sharky's Cantina, won the island chowder cookoff two years ago, he celebrated by opening a seafood-focused eatery with chef Alex Nagi. Located in the heart of Oak Bluffs, the laid-back spot has been packing 'em in since it opened last summer. The smart menu includes fried oysters, lobster salad with crispy potato cakes, pan-seared scallops, and insanely good fried chowder balls, a.k.a. ChoCos, that are the most decadent taste of the sea you can get. But it's the chowder that'll keep you coming back. The award-winning Martha's Vineyard recipe is light, silky, and packed with quahogs, while the creamy, roux-based New England blend comes spiked with bacon. 9 Oak Bluffs Ave., Martha's Vineyard, MA 2557, mvchowder.com.

You've planned the menu and invited the guests. Now you need the perfect wine to make the dinner party a success. Look no further: Bauer Wines & Spirits buyer Howie Rubin knows his wines, has an encyclopedic knowledge of food, and can direct even the most confused oenophobe to the right bottle. Rubin may not offer as expansive a selection as some shops, but the juice he stocks is superlative, and his advice—unobtrusive but freely offered for the asking—is comforting and practical. He and his well-trained staff can steer you toward the perfect bubbly for caviar, the ideal sauvignon blanc for oysters, or a new shiraz for lamb to suit your menu, taste, and budget. Added bonuses: Cases are sold at a discount of 10 percent and delivery is free. 330 Newbury St., Boston, MA bauerwines.com/.

For a town that prides itself on its seafood, it can be tough to find a seafood restaurant that goes beyond the standard boiled lobsters or watery clam chowder. Enter KingFish Hall, where chef-owner Todd English has designed a menu that delights, with everything from traditional lobster rolls—sweet and tender lobster meat on a buttery, toasted nest of bread with just enough mayo and celery leaves to hold it together—to more complicated dishes, such as miso-marinated cod. There's also the "dancing fish" of the day (herb- and butter-basted fish placed on individual rotating skewers that spin around a circular wood-burning pit) and a daily chilled and briny selection of raw shellfish. As for the chowder, there's the not-so-traditional New England style, thick and delightfully creamy, or the ever-changing daily varieties accompanied by homemade oyster crackers. 188 South Market Building, Faneuil Hall Marketplace, Boston, MA .

Andrea Martin, as the motormouthed mother from Hell in Christopher Durang's Betty's Summer Vacation at the Huntington Theatre, didn't so much give a performance as unleash herself on stage like a hysterical vaudevillian tornado.

UpStairs on the Square and Via Matta

In replacing their much-loved UpStairs at the Pudding (some considered it the real institution of Harvard Square), Deborah Hughes and Mary-Catherine Deibel had big shoes to fill—their own. But they've done it, creating an outstanding restaurant that has surpassed the expectations of even their most loyal following. The décor is at once outrageous and glorious—plaid patterns on the walls with animal-print carpeting, jewel-toned upholstery, massive fireplaces, gilded mirrors, and lots of pink. Two menus, in the hands of chefs Susan Regis and Amanda Lydon, offer everything from simple grilled cheese and rich tomato soup to flavorful Kumamoto oysters, roasted lamb, and rabbit. Don't miss the "wedding cake for one" dessert: The portion is large enough to share, but this is a divine indulgence for you and you alone. Via Matta, meanwhile, has had the kind of debut year legends are made of: Mick Jagger commandeered a table not once, but twice in the restaurant's first two months of business. Add to that gushing praise from critics nationwide and you've got, by all accounts, a bona fide success. But is that really a surprise? Schlow and partners Christopher Myers and Esti Benson know how to put on a show, as evidenced by the success of their powerfully stylish Radius. At Via Matta, the gloss is toned down, but the style still shines through, with an elegantly casual dining room, cozy bar, and adjacent café. Then there's the food: perfectly executed traditional Italian fare bursting with flavor, from the simple spaghetti aglio e olio to pan-roasted chicken—all dishes that will make you long for another serving. UpStairs on the Square: 91 Winthrop St., Cambridge; Via Matta: 79 Park Plaza, Boston, MA upstairsonthesquare.com; viamattarestaurant.com.