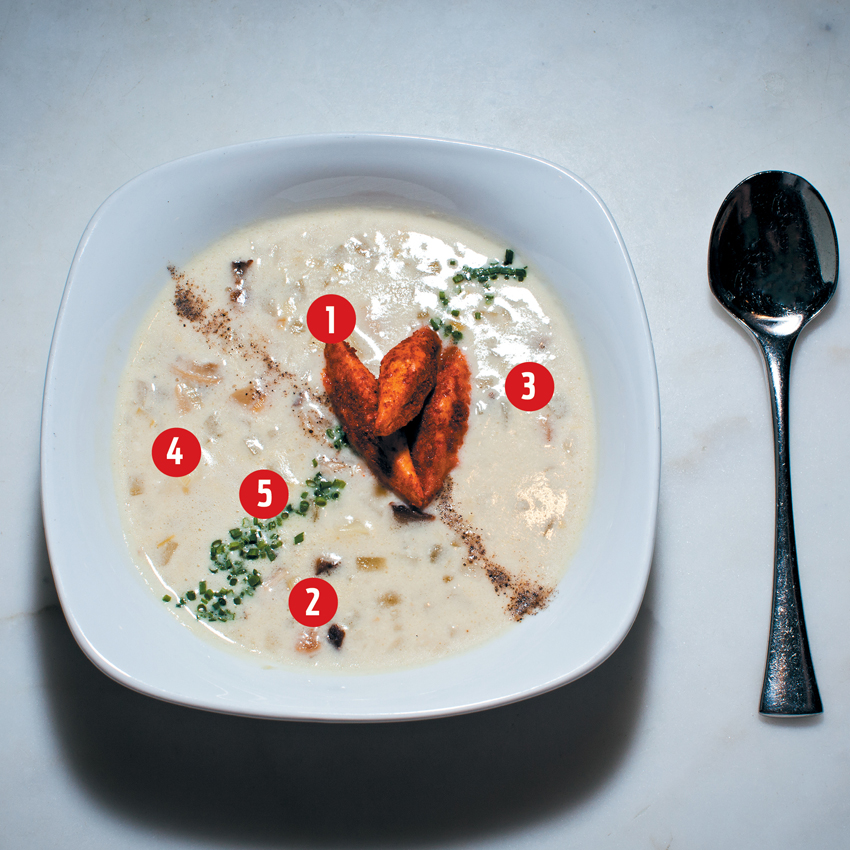 Anatomy of a Winner: Here in Boston, it's tough to stand out in a veritable ocean of chowdah. Here's how Barbara Lynch's oyster bar shows up the competition. 1. Flaky puff pastry "oyster crackers" are coated with sweet paprika and cayenne pepper for a buttery crunch and a bit of heat. 2. Thick bacon lardons add smokiness and bite. 3. A heavy distribution of meaty top-neck clams give the soup the requisite brine and chew. 4. Clam juice and white wine cut the richness of the butter and heavy cream. 5. A swoosh of black pepper and a sprinkling of chives add additional flavor and make for a beautiful bowl. 550 Tremont St., Boston, MA bandgoysters.com.

This annual extravaganza isn't just about seeing contemporary work—it's about immersing yourself in it. Along with musical, dance, and theater acts, you'll find a poetry tent, huge wild-animal puppets, and beatbox workshops. In other words, sweet, sweet sensory overload. cambridgema.gov/arts/programs/riverfestival. 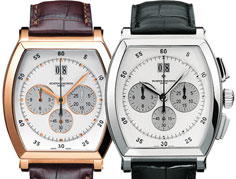 This is where to go after you've checked that shiny new Rolex (which Royal doesn't carry) off your wish list and are ready to start building a collection around more-exotic lines. Since 1948, the family-run business has catered to aficionados with hundreds of models from top brands like Ulysse Nardin and Vacheron Constantin—both exclusive to Royal in the Boston area—and an in-house repair service. Plus, the excellent salespeople don't work on commission, so feel free to take your sweet time. 58 Main St., Andover, MA 1810, royaljewelers.com.

For the healthy: blackened tuna sashimi. For the daring: wasabi-crusted salmon. And for the hungry: a lobster roll that's meaty, chunky, and sweet. No matter what your palate craves from the sea, Skipjack's probably serves it, and serves it well. This year, the Newton and Natick branches of the three-restaurant chain even began to feature sushi, from hearty lobster maki rolls to thin-sliced tuna sashimi. Or bypass the raw and head straight for the cooked—everything is flapping-fresh and runs from the creative (mahi-mahi grilled to perfection, then smothered in a peach pepper salsa) to the traditional. (The Boston clam chowder is a rich meal unto itself.) 55 Needham St., Newton, MA skipjacks.com/.

For a town that prides itself on being a seafood lover's Valhalla, Boston has surprisingly few exemplary restaurants in the category. And after subtracting the ones that'll set you back more than a few clams (B&G, Oceanaire, even Legal), the outlook is bleak indeed. A lovely exception is Pescatore, serving up Italian-style seafood entres that never venture past the mid-teens. Highlights include generous pasta specials like the fusilli Amalfi: Tossed with sweet lobster claw meat, scallops, and shrimp in a garlic-wine sauce, it makes for an unbelievable bargain. 158 Boston Ave., Somerville, MA 2144, pescatoreseafood.com.

For a pizza joint, this Eastie institution has more than its fair share of character—thick Boston accents, a Sinatra-loaded jukebox, and rough (yet deep down, totally lovable) servers. And then there's the pizza itself: a crunchy, cornmeal-dusted affair slathered with gooey, sweet-sauced cheese and topped with delicacies like house-made sausage, all of it positively begging for a Bud Light or cheap wine chaser. And if you're too impatient to wait for a sit-down meal, the anything-but-ordinary cheese pie is pretty fantastic straight out of the to-go box. 111 Chelsea St., East Boston, MA 2128, santarpiospizza.com.

Suburban restaurants often thrive precisely because they're away from the city: A captive audience takes what it can get. Square Café by contrast, could compete fiercely in any Boston neighborhood. This New American eatery radiates a laid-back confidence born of a masterful affinity for different cuisines. Another compliment, and one that may come out wrong: Menu descriptions that sound like overwrought disasters ('stuffed pork chop with spinach, prosciutto, cheddar and cornbread stuffing, sweet potato-vidalia gratin, and golden raisin demiglace') turn out to be carefully calibrated balancing acts of texture and flavor. 150 North St., Hingham, MA 2043, .

We thought we couldn’t possibly love Union Square Donuts’ soft, flaky pastries, filled with homemade pineapple preserves, glazed with blackberry-basil-lime icing, and studded with smoky-sweet Vermont maple bacon, any more than we already do. Then the Somerville-born bakery, led by recent Food Network Holiday Baking Championship finalist Sarah Belisle, started offering its treats at outposts of the Bagel Table, another growing Boston-area brand. Now we know where to go for a morning fix of sugar and everything spice — and boy, is it nice. Multiple locations, unionsquaredonuts.com.

So many flavors, so little Dexatrim. First there are the standards: chocolate, malted vanilla, strawberry. Then come the more esoteric mixes, such as amaretto, carob, and Dutch orange chocolate. They're each the base for Boston's zenith of all things sweet, cold, and frothy: the Herrell's frappe. (A little schooling for confused out-of-towners: In New England, a milk shake is milk and syrup, without ice cream. A frappe is a blend of all three.) And what texture, dense enough to make you work at drawing the first sip through the straw, hit with just the right ice-cream-to-milk ratio, and icy enough to hold up on the hottest day. What else did you expect from local ice cream bodhisattva Steve Herrell? 155 Brighton Ave., Allston, MA herrells.com/.

Purists might be put off by the fact that there's pizza on the menu, but it's impossible to argue with the down-and-dirty authenticity of Chris' barbecue sauce. This place would be right at home on a Memphis side street, from the friendliness of the staff to the offbeat customers who wander in now and then. Try the Dallas-sized plate of meaty, flavorful ribs, or the heaping pulled-pork sandwich. Both ooze in a sauce that is at turns sweet and spicy, changing subtly with each bite. There are traditional side dishes such as collard greens and cole slaw, but the sweet potatoes drowned in maple syrup are a must. 1370 Dorchester Ave., Dorchester, MA .

That Lululemon chose this California-cool yogi to lead hundreds of people in al fresco downward dogs in Copley Square to fete its new Newbury store didn't surprise her devotees: Kaufenberg's challenging hip-hop classes are so much fun, we often forget we're working out. Until the next morning, of course—when we wake up with new aches in our abs and new tunes to download (thanks to her thumping playlists).

The Boston Public Market debuted on Hanover Street just three years ago, and already we can’t remember a time without it. The 28,000-square-foot indoor food hall is the ultimate one-stop shop for all things local and scrumptious, from the perennially sweet-smelling cider doughnuts of Phillipston’s Red Apple Farm to the artisanal homemade sausages at Hardwick’s Stillman Quality Meats. The market’s 35-plus vendors make it tough to choose what to buy, so take an investigatory loop around first, then fill a few reusable bags right up to the brim. 100 Hanover St., Boston, MA 02108, bostonpublicmarket.org. 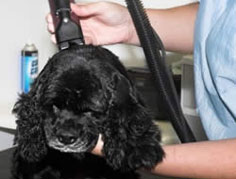 Soul food meets soulful music at this longtime fixture, where live entertainment is the soundtrack for dinner and brunch service featuring dressed-up southern comforts like country-fried chicken wings with sweet peach chili and oh-so-perfect collard greens. The bands play on thanks to still-new owner Nia Grace, who not only stewarded the storied spot to the other side of a pandemic, but — as cofounder of the recently launched Boston Black Hospitality Coalition — uses her significant stage to advocate for a more equitable restaurant industry in the city. 604 Columbus Ave., South End, MA 02118, dcbkboston.com.