No green apple martinis here. Only ingenious blends make it onto Rendezvous's cocktail list: gin blended with kaffir lime and curry, vodka stirred with pear brandy and cardamom. Like the formidable wine list, the mixed drinks are designed to enhance the Mediterranean flavors on the plate. Not too staid, not too trendy, and never too sweet—precisely what we (over 21) Goldilocks types are looking for. 502 Massachusetts Ave., Cambridge, MA rendezvouscentralsquare.com.

Between hitting the dance floor and hitting the bar, most wedding guests ignore the cake—or else pick halfheartedly at a slice that's too sweet on the outside, too dry on the inside. The veteran treat-makers at Party Favors will bake your choice of 10 kinds of batters (among them, carrot, almond, and lemon); pack it with moist fillings like cherries and cream, French mocha buttercream, and white chocolate-cinnamon mousse; and top it off with a just-right frosting. The result: a cake made to get, and keep, your guests' attention. 1356 Beacon St., Brookline, MA partyfavorsbrookline.com.

You have a vision. Bryan Rafanelli can make it a reality. From save-the-dates to servers in period costume, Rafanelli's got it covered. So whether you want something exotic and over-the-top or a refined and elegant affair, here's one guarantee: Your special day will be remembered forever, as Team Rafanelli fades sweetly into the background and you take all the credit. 142 Berkeley St., Second Floor, Boston, MA rafanellievents.com/.

Ah, sweet infants: immaculately adorable one minute, covered in spit-up the next. The best baby collections accommodate both extremes, though none with quite as much versatility as Janie and Jack. Made of the softest cottons, velours, and wools, these garments evoke the preciousness and high quality of European layette lines, but have a roll-with-it American attitude that won't wilt at that first spot of drool. Atrium Mall, Chestnut Hill, MA 2467, .

We're not thrilled about standing in a disposable thong in front of a stranger, but we'll do it for Perfect Tan. In fact, the incredibly sweet spray-tan technicians make the experience about as pleasant as can be. As for the tan itself, it's hands down the most even, natural-looking bronzing we've encountered, reliably delivering up to a week of full-on beach-goddess glow. 1030 Commonwealth Ave. #2, Boston, MA 2215, perfectan.com.

There's some damn fine bread in this town, but we're throwing down the gauntlet and calling it for Hi-Rise. Why? Shelf after shelf of simple but flawlessly executed loaves: chewy sourdough, rich stone-ground cornbread, sweet and yeasty brioches, and hearty raisin-pecan. Holidays bring special orders of exemplary stollen and challah. House baker Rene Becker is a self-proclaimed fanatic about ingredients and techniques, and it shows. He's the Leonardo da Vinci of carbohydrates. 208 Concord Ave., Cambridge, MA hi-risebread.com/.

The golden glow, faintly sweet aroma, and heavenly texture of the freshly baked loaves at this cute shop in a still-grungy stretch of J.P. could make even the most ardent Atkins disciples recognize the folly of their ways. Along with staples such as multi-grain and white breads and crusty baguettes, Bread & Butter features daily specials—the cinnamon swirl offered on the weekends is especially tasty—and a selection of pastries including a twice baked croissant, stuffed with almond paste and dusted with sugar, that will put you back on carbs for good. 3346 Washington St., Jamaica Plain, MA .

Italian on demand: Stuff the freezer with an assortment of Capone's gnocchi, ravioli, and tortellini, and toss in a couple of containers of vivid pesto and cardiac-crisis Alfredo sauce. Guaranteed, your guests will bicker over the last square of ravioli stuffed with lobster and crab, the last crescent of aged Gouda tortelloni. The three varieties of fresh gnocchi are addictive— black pepper, chive and sweet potato— and all plump up like miniature footballs when you cook them. 14 Bow St., Somerville, MA . 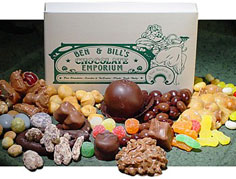 It takes a brave soul to sample lobster ice cream, and an even braver one to put it on a menu. But Ben & Bill's is that bold and, after years in the shadow of that other island sweet shop, has emerged as the Vineyard's frosty frontrunner. The servings of handmade ice cream (ginger, pumpkin pie) and gelato (tiramisu, chocolate mandarin) are enormous, but if your sugar cravings still aren't sated, you can bag some candy and truffles to go. 20A Circuit Ave., Oak Bluffs, MA 2557, benandbills.com.

It's true that the menu here rings more Sicilian than New England. But this is equally true: The seafood you'll find tossed with pasta and served in the skillet, or dressed simply over a salad, is worlds more flavorful than the clam-shack offerings you'll find all over town. The calamari is tender; the broiled haddock's simplicity showcases its sweetness; and the chowder is a combo of clams and cream that's truly soul-warming. 2 Northern Ave., Boston, MA 2210, dailycatch.com.

No child's play, this. Christina's ice cream is an acquired and—unless your offspring have preternatural palates—grownup taste. By that we mean green tea. Adzuki bean. Carrot cake. Fresh rose. Herbal chai. Even the standbys generally get an epicurean twist: The vanilla is malted, and the coffee is cappuccino. All of it is homemade, and flavors change with the seasons and the whims of its creators. When's the last time you saw something sweet taken so seriously? 1225 Cambridge St., Cambridge, MA 2139, christinasicecream.com.

The finest Chinese around, it turns out, isn't anywhere near Chinatown. JoJo specializes in Taiwanese cuisine, but there are enough options for every level of taste and bravery, from the traditional (pancake with scallion and roasted beef) to the adventurous (Szechwan pig intestines with tofu hot pot). For a sweet finish, try the bow bin—a shaved-ice dessert topped with beans, tapioca, grass jelly, and peanuts. 103 Brighton Ave., Allston, MA 2134, jojotaipei.com. 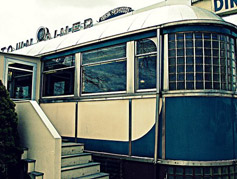 Fanatical loyalty to one's local diner isn't based on food alone: It's the atmosphere, stupid. At the Deluxe, which cooks up solid fare with a twist (e.g., sweet-potato pancakes), we're completely won over by the charming bedlam of the place, with its clattering plates, sizzling grills, bustling waitstaff, and din of dozens of conversations at once. It's no surprise that come the weekend, the lines stretch halfway back to Cambridge. 627 Mount Auburn St., Watertown, MA 2472, .