Healthy hair is owner and lead stylist Andrea Sealey’s main goal—and it shows in every masterful style she creates inside her chic Dot. Ave. salon. Sealey’s recently expanded list of services makes the space a one-stop shop for everything from kinky twists and micro-link extensions to always-silky silk presses. Her braids, meanwhile, are true works of art—no surprise given the Roxbury native has been at it since she was 10 years old. 1690 Dorchester Ave., Dorchester, MA 02122, bostonhairnista.com.

Okay, so Laugh Boston may be smack in the middle of no man’s land (has anyone ever actually been to the convention center?), but we promise it’s worth the trek—and so do plenty of big-ticket comedians. Jimmy O. Yang, Leslie Jones, and Dulcé Sloan have all hit this Seaport-ish establishment, as has cult-favorite storytelling series “The Moth.” So grab some pals and an Uber—a belly-laughing night awaits. 425 Summer St., Boston, MA laughboston.com/.

You’ve chosen your leading ladies, now let Flair Boston handle the rest. Trust these pros to select the trendiest bridesmaid attire, including floral gowns by Alfred Sung and shimmering jumpsuits by Dessy. Do your gals live across the country? No problem. Have a procrastinator in the bunch? Totally fine. The boutique offers hundreds of dresses online and can “super rush” orders so you can rest assured that your ’maids will be dressed to impress. 140 Newbury St., Boston, Massachusetts 02116, flairboston.bridesmaid.com. 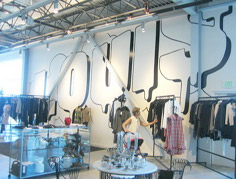 Maybe we've heard where Louis will relocate when its lease is up next year; maybe we haven't. What we can confirm, though, is that while everyone has been buzzing over the Boston style bastion's next address, Louis's focus on ahead-of-the-curve finds for women, men, and home has continued undistracted. In addition to long-stocked designers like Marni and Proenza Schouler, the arrival of knit whiz Kimberly Ovitz and stealth favorite the Row appeals to the current value-obsessed mindset. Meanwhile, the revitalizing powers of the skin-care department, recently boosted by 3 Lab Series and Rodin Olio Lusso, puts chain department stores to shame. Big move or no, here's betting Louis stays in one place: on top. 60 Northern Ave., Boston, MA 2110, louisboston.com. 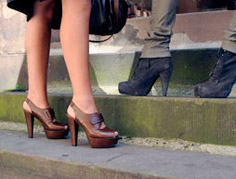 With its efforts this past year focused on footwear, Louis Boston now rivals national department stores in quantity—and beats them outright in quality. Delicious flats by Devotte and Gryson line one wall, while heels both timeless (Mayle) and risk-taking (Proenza Schouler) perch along another. And although $800 Balenciagas remain part of the offerings, it's possible to score an equally dynamite pair of Coclico sandals for a few hundred bucks (as, unable to resist, we did). 60 Northern Ave., Boston, MA 2110, louisboston.com. 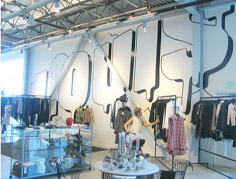 Between the sidewalk throngs and the cheesy chain stores, Newbury Street's attractions can seem overshadowed by, well, the pedestrian. Particularly when you consider that Louis offers all the perks of the strip—but with on-site parking, pristine bathrooms, and guaranteed protection from inclement weather. Owner Debi Greenberg's internationally praised taste informs each and every buy for the four-story retail landmark, from the cutting-edge home goods floor (featuring many plucked-straight-from-Paris pieces, as well as a new Mrs. John L. Strong stationery boutique) to the double-decker layout of dandy men's apparel. The women's collection, showcasing the likes of Rag & Bone and the much-coveted Marni, reposes on the top floor—icing on the cake. 60 Northern Ave., Boston, MA 2110, louisboston.com.

Fashionistas on a budget, don't despair. While Louis Boston can be a tough indulgence for the sartorially savvy yet financially challenged, all that changes twice a year when seasonal merchandise throughout the store goes on sale for 50 percent off. (Sale dates differ from season to season, but usually land in January and mid-July.) Wander rack after rack of Brioni suits and Helmut Lang tees for him, Aida Barni cashmere sweaters and Prada shoes for her, all with earthly price tags. 234 Berkeley St., Boston, MA louisboston.com/.

Louis Boston is fast becoming the Tom Hanks of one-stop shopping. In a category with increasingly stiff competition, Louis returns year after year to win the prize, thanks to its superior selection, variety, and (okay, occasionally snooty) service. Where else can you find the perfect pair of shoes, killer dress, and new lipstick while having your nails done—all in one afternoon? Men can find a full range of suits, casual wear, shoes, and even tuxes, all ready to be tailored at a moment's notice. With Debi Greenburg mixing cutting-edge designers from Dries van Noten to Anait Bian with tried-and-true labels like Prada, the competition doesn't stand a chance. 234 Berkeley St., Boston, MA louisboston.com/.

Louis's unparalleled offering of women's designs by fashion darlings including Marni, Tuleh, and Zac Posen—not to mention a formidable men's collection with everything from Brioni to Trovata—makes it a legendary local house of style. The revitalized first floor now includes more bath products, linens, and vintage home goods than ever, and the salespeople remain polite, not pushy. 234 Berkeley St., Boston, MA louisboston.com/.

2001 Best "What Have You Done for Me Lately" Award

A month after chief book critic Gail Caldwell won a Pulitzer, the Globe reduced the size of its book section.