Here is where to head when you want to dress like the models in Esquire and GQ. Doing so ain't cheap, mind you, but the expert and generally courteous staff will steer you toward top-notch renditions of whatever look you're seeking. The specialized heme rooms—like the Corner Office, Paddock by Kiton, Helmut Lang, On-the-Road with Gianluca Isaia, etc.—make the large selection a bit more manageable. And while it may be a trifle difficult to imagine Jack Kerouac walking into the one named for his beat masterpiece and dropping $195 on a button-down black shirt, that doesn't mean you won't be sorely tempted to. 234 Berkeley St., Boston, MA louisboston.com/.

Buyer Debi Greenberg scours the globe to find the in fashion for men and women alike. Her Back Bay store is known the world over for its incredible timing, with many design darlings of the fashion press finding their way onto its floors before they hit the big time. The store caters to a wide variety of ages, from street fashion on the ground floor to power suits on the second and third levels, and a mix of women's wear designers from Kiton to Imitation of Christ. There's also an extensive and cutting-edge makeup counter, Salon Mario Russo, and a top-notch restaurant. 234 Berkeley St., Boston, MA louisboston.com/. 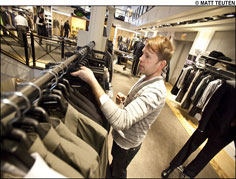 If Louis Boston rented out sleeping space, there'd be no reason to ever leave. The four-story Newbury legend can clothe you (quite well, in Dries Van Noten and Mayle, and as the only place in town that carries Marni), accessorize you (with quirky jewelry from Mannin and Francisca Botelho), coif you (Salon Mario Russo, third floor), and feed you (from chef Pino Maffeo's on-site kitchen). The only part of the store you'd have little use for is the otherwise excellent home goods collection—your new address comes already very nicely appointed. 60 Northern Ave., Boston, MA 2110, louisboston.com. 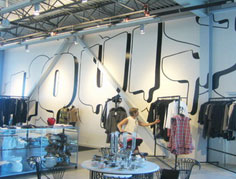 Hey, you—in the cargo pants and Chucks. Casualwear is fine for casual moments, but your big client meeting, your anniversary dinner, and for-the-love-of-Christ your best friend's wedding call for something far spiffier. At Louis Boston (go on, it's not as scary as it looks), made-to-measure and ready-to-wear suits from Brioni, Kiton, and Dries Van Noten make dressing up a cinch. Even easier-going ensembles by such names as Neil Barrett and Annapuna put postcollege khakis to shame. 60 Northern Ave., Boston, MA 2110, louisboston.com.

A double winner here. The four-story style mecca is the arbiter of quality men's fashion for both those who are looking to stand out from the crowd and those who are classic and cautious. You'll find Italian made-to-measure masters, standard faves like Ralph Lauren's purple label, and Louis' own line. Fashion-timid men may require some education— not to mention a platinum credit card— but Louis' staff are masters in the art of dressing. 234 Berkeley St., Boston, MA .

For all the obvious reasons. Even if you can't afford to shop there regularly, the experience is worth a visit. 234 Berkeley Street, Boston, MA .

The driving force behind Boston's corporate power brokers is, literally, this professional and prompt company. Drivers are consistently courteous but not too chatty, and always arrive at their destinations a few minutes early (though they won't ring the bell until the precise designated pickup moment). The fleet of high-quality, immaculately clean vehicles includes Volvo sedans, buses, and vans, many with well-treated leather interiors and fully stocked with periodicals such as the Wall Street Journal. 69 Norman St., Everett, MA bostoncoach.com/.

Given the plush decor and the nightly jazz entertainment, it's a shame this place hasn't taken off. Maybe now it will. Exchange Place, Boston, MA .

We love their scones, their sticky buns, and their cinnamon rolls, but it's the macaroons that make us swoon. 45 Kenneth Street, Newton, MA . 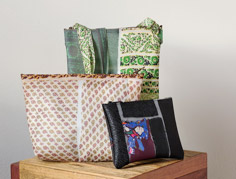 The ground-floor inventory at Louis Boston changes as often as Maria Fei's whim dictates—which is to say, almost daily. The veteran home-accessories buyer is constantly tweaking the store's displays to incorporate her latest prizes, gleaned from upscale markets and dealers around the world. Porcelain tea sets by Mat & Jewski and graceful Astier de Villatte flatware are juxtaposed with handcrafted birch birdhouses; dotted amid the lighting fixtures are vintage French dishes and glassware, handmade candles, and even a clutch of beautifully preserved antique handbags. 60 Northern Ave., Boston, MA 2110, louisboston.com.

A lot of the ladies who lunch consider this rich concoction the next best thing to sex; and they might be right. Boston, MA

2001 Best Impersonation of The National Enquirer

For reporting that an adulterous affair may have provoked the murders of Dartmouth professors Half and Susanne Zantop.