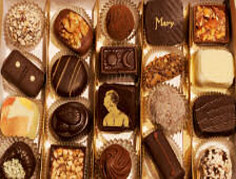 As Boston's artisanal confectioners trend toward ever-weirder flavor combinations (poblano pepper truffles, bonbons oozing with olive oil), Beacon Hill Chocolates has us falling back in love with the classics: fillings like salted caramel and hazelnut praline delivered in beautifully tempered shells. The competition can just eat their quirky-candy hearts out. 92B Pinckney St., Boston, MA 2114, .

He's guided the East Boston Yankees and All-Stars to eighteen championships during the past eleven years with a humane style of managing that clearly pays off. Sardina founded the East Boston Athletic Association, coaches football in the off-season and T-ball (modified baseball for little kids) on weekends, and is a policeman, husband, and father of five (in his spare time). East Boston, MA

Performing a set at a sweaty, cramped, underground club like Mottley's is the embodiment of what comics call paying your dues. Owned, operated, and booked by two funnymen (and their business partner), Mottley's is a proving ground for some of Boston's most promising comedy talent. The stage show is the main attraction, but if you hang back by the bar, you'll get a second serving of entertainment—eavesdropping on the performers' post-set repartee—for the same reasonable admission price ($8 to $20, depending on the show). Trinity Bar, 61 Chatham St., Boston, MA 2109, mottleyscomedy.com.

Even before Leonardo DiCaprio's Romeo and Gwyneth Paltrow's Shakespeare in Love, the Commonwealth Shakespeare Company's free outdoor performances showed Boston just how sexy the Bard can be. Under the brilliant direction of Steven Maler, the young, enthusiastic, multicultural cast of players brings Shakespeare to the Boston Common, using the recently renovated neoclassical Parkmand Bandstand—and all the world—as a stage.

Former Boston Celtics player Ed Pinckney left the pros in the dust when he competed in a Boston Globe stock-picking contest. Pinckney tagged RJR Nabisco, which fell some 27 percent during 1994. But his competitors' picks fell even further. As any bench player knows, when the call comes you don't need to be great...just better.

This is where Boston's other sushi chefs eat on their nights off. Memorable maki comes with ingredients ranging from burdock root to Japanese basil. The fish is unbelievably fresh, the presentation stunning, the extra-long hours ('til 4 a.m., Tuesday-Saturday) convenient. 14 Hudson St., Boston, MA .

With brunch, trivia, late-night drinks, dancing, and a solid crowd of regulars, Club Cafe has it all. For decades, this place—at a prime intersection of the Back Bay and the South End—has been the Cheers of Boston's gay scene, and it's easy to understand why. 209 Columbus Ave., Boston, MA clubcafe.com.

Sixty years in, there's nary a Boston venue that hasn't been decked with Winston's spectacularly traditional yet fresh-feeling arrangements. While the venerable chain's seven Great Boston stores do a brisk retail business, weddings are no small side project: Brides get close personal attention at the South End design studio. 160 Southampton St., Boston, winstonflowers.com.

There are certain advantages to Boston's lingering Anglophilia. Aquascutum is one of them. The sole American outpost of the venerable British chain carries trim tailored suits, broad-collared dress shirts, and vibrantly hued ties, as well as the clothier's signature line of elegant raincoats. The slickers are debonair enough to fit into even the dandiest wardrobe—and utterly inspirational here in our puddle-prone city. 450 Boylston St., Boston, MA aquascutum.co.uk/.

Not for nothing has this Boston institution been a favorite among other Boston institutions (Isabella Stewart Gardner and Ted Williams, for starters) since it opened in 1796. The store is packed with sapphire rings and ruby and diamond necklaces that shine with all the quiet wattage of a chandelier. Want to cut back on the bling? Go for any of the elegant diamond-encrusted pearl pendants—heirlooms in the making, every last one. 330 Boylston St., Boston, MA shrevecrumpandlow.com/.

Blades Board and Skate

What impressed us most about this place was that the friendly sales assistant had personally tried on 50 of the skates on display. Even better, she seemed genuinely interested in helping us find the right pair. The stock here also includes a smorgasbord of gear, such as helmets, pads, and socks. The staff arms you with tips on finding a qualified instructor and Boston's places to skate, so you'll leave feeling ready to roll. 349A Newbury St., Boston, MA blades.com/.

Boston's best-kept secret works on Tremont Street in Chinatown. His name is Gin Soon Chu, but he is known in the area only as sifu (teacher). Sifu is one of two living disciples of the Yang Tai Chi line. Martial artists from all over the world come here to study with the grand master, who is said to be wiser than an owl and stronger than a bear. 324 Tremont St., Boston, MA .