A regional variation of spicy fried squid was social media's breakout star of the DNC, and here's where you can try the made-for-memes dish.

Rhode Island gonna Rhode Island. The littlest state in the union—whom we love to call our neighbor—made a big social-media splash during the Democratic National Convention. As the delegate roll calls were announced in videos that highlighted each state’s local culture, state party chairman Joseph McNamara managed to work in both a call to support the vital Ocean State fishing industry (yes!!) and a shout-out to the official state appetizer, calamari (o-kay?). A responsibly masked server held out a platter of fried squid to the camera. A meme was born. So too was born a sudden craving for Rhode Island-style calamari, a regional variation that typically sees the battered seafood served with cherry peppers and a garlic-butter-sauce. Want to get your tentacles on some without having to cross state borders? We’ve got a few favorite Boston-area options for the Rhode Island signature dish, both faithful versions and flourish-y ones. 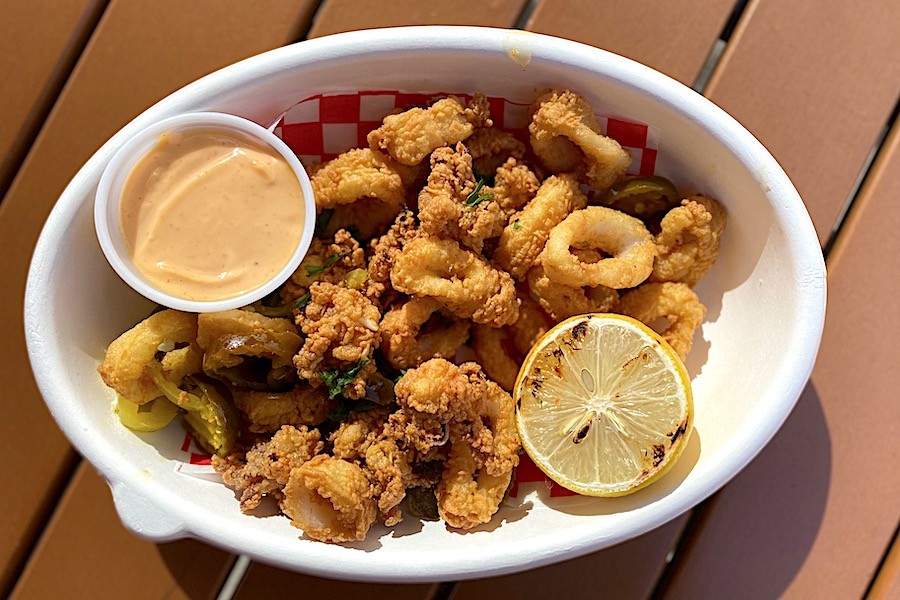 When the Crab does squid, it goes Rhode Island-style. Actually, this tented beach-shack setup on Fort Point Channel in the Seaport does a lot of fried seafood right, serving it on a cheery deck where red sangria flows like waterfalls.

It’s been a while since we’ve talked about Figs. Over the last decade, mentions of Todd English restaurants have more often accompanied stories about the Boston export’s celeb-chef antics—which have either tarnished or redefined his brand, depending on who you ask—than stories about his food. But the faithfully Rhode Island-style calamari at his landmark Figs locations? [Chef’s kiss.] 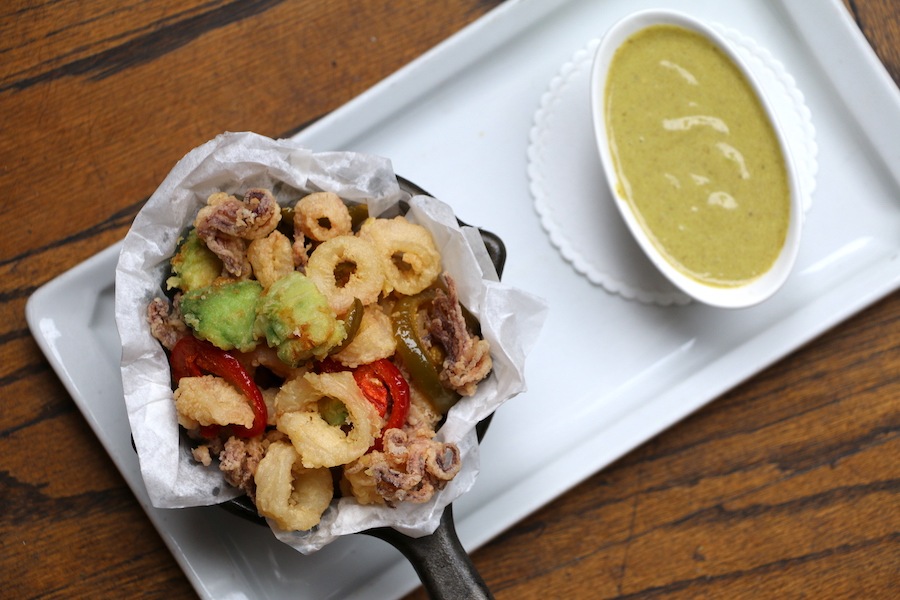 Grill 23 is a steakhouse, first and foremost, and when it reopened in August it even introduced a “Butcher and Beverage Shop” that offers to-go cuts of beef—say, 100-day dry-aged ribeye ready for home grilling—plus group-sized takeout cocktails. Don’t sleep on the seafood, though, including calamari served Rhode Island-style with garlic butter-sauce and cherry peppers; Grill 23 adds some lightly fried avocado and a side of green goddess dressing, for flair.

Rhode Island-style calamari is a menu staple at locations of the locally-born Legal Sea Foods chain, including its distinctly-branded Legal on the Mystic location in Somerville. But it’s hard to beat the harbor-front setting (and views!) at the Seaport flagship, a three-floor behemoth that played a big role in turning the once-sleepy neighborhood into what it is today. 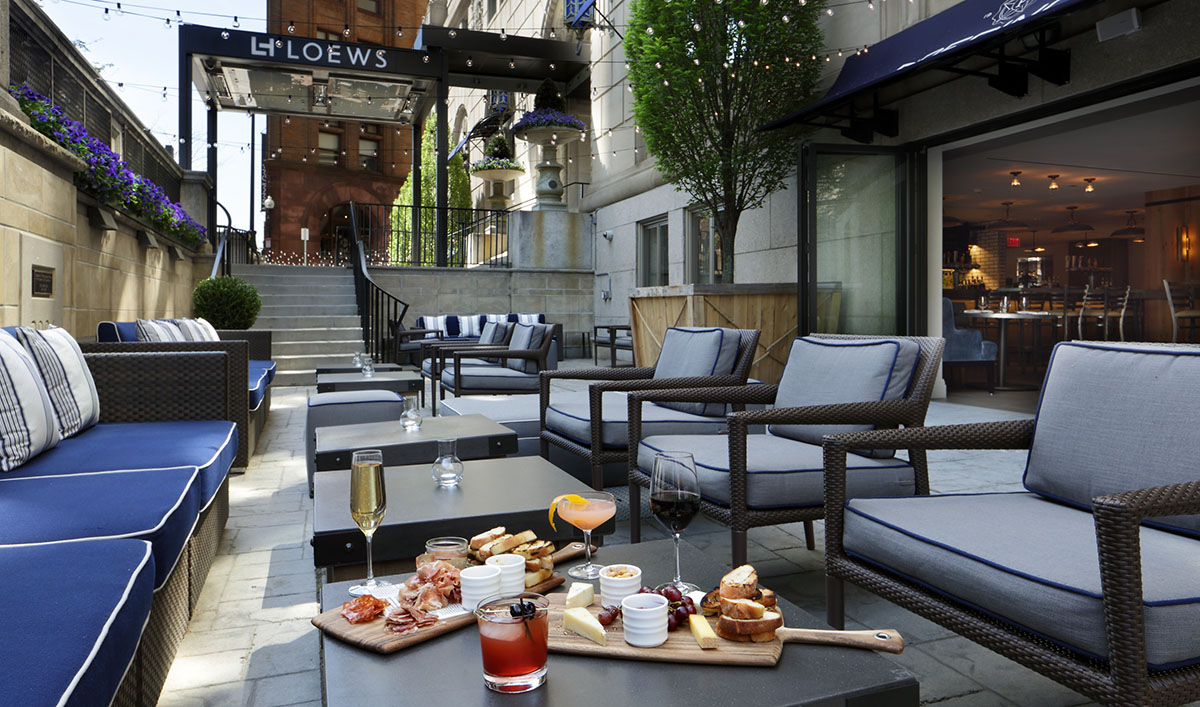 Paparazzi snapping photos of your patio-dining date again? Retreat to the private-feeling sunken patio lounge at Precinct in the Back Bay, and resume your canoodling over the fried Point Judith calamari. Despite its origins, the top-shelf (er, top-surf?) squid, caught in the western waters of Narragansett Bay, otherwise takes liberties with “Rhode Island-style”: cherry peppers are swapped for banana peppers, and it’s served with garlicky tomato sauce and a mustard aioli. Guess what? It’s a twist we’ll take.

Speaking of Back Bay patios, few remain as prime-for-people-watching as Stephanie’s, a 1994-opened neighborhood institution. It’s a fine place for a summer-time cocktail and fried calamari, here a Rhode Island-inspired offering of Point Judith squid with Italian long hot peppers and lemon aioli. Give a fresh glance to the rest of the menu, too: This summer, Stephanie’s menu grew to include selections (such as signature burgers) from Met Back Bay, its cross-street sibling. Met Back Bay’s big patio, meanwhile, has now been given over to Saltie Girl, a seafood-focused restaurant that was previously relegated to a small, ancillary interior. If that was all hard to follow, here’s the short-take: Yum food, do eat.

“Neighborhood steakhouse” can be a hard line to toe, but this Brighton landmark hits the mark: homey but not hokey, more Friday-night-treat than corporate-expense-account. Among the pre-sirloin starters, you’ll find delicious, lightly fried calamari with cherry peppers. Garlic butter is served by request, but the Stockyard otherwise opts for house-made marinara and a side of tartar sauce, too.

At legendary local chef Jasper White’s casual seafood stalwarts, Rhode Island-style calamari is always on the menu. But this month, it’s also included among the offerings for Dine Out Boston, a restaurant week-style initiative that sees restaurants put out distinct prix fixe menus at special prices. This year, Dine Out Boston runs from August 16-21 and August 23-28; you can find the full list of participating restaurants, multi-course menus, and tiered price levels here.