Gather Ye Endorsements While Ye May 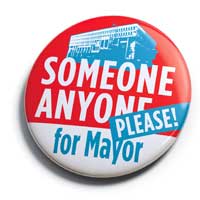 Is Sam Yoon the victim of identity theft, or exploring the possibility of running for mayor of Boston by campaigning in San Francisco?

“Help us elect Sam in 2009!” read one invitation, describing the candidate’s “quest to become the first Asian-American mayor of Boston.”

Yoon’s office says that the California fundraiser was devised by enthusiastic supporters, and that the Boston City Councilor hasn’t yet decided whether or not he’ll run.

If you’re going to launch a campaign, Sam, you’d better announce your intentions soon. BoMag writer Joe Keohane is sadly on his way out of town, which means his endorsement offer is about to expire.

Back in June, Keohane offered his support to anyone who’s willing to mix it up with Mayor Tom Menino.

It may be my irrational exuberance making a comeback, but I pledge to give play in this column to anyone who has formally entered the race, no matter how much of a longshot. . . . You may ultimately find yourself cut to offal for having the audacity to run, but I’ll go down with you. It’ll be good to see the mayor sweat a bit, and the city will benefit in the bargain.

Sam Yoon may have the endorsement of Survivor winner Yul Kwon (!?) and a rapidly-growing campaign account, but what about our support? We’re giving it away for free—to anyone—and his so-called supporters don’t even send us an invitation to their party?

But all can be forgiven. All Yoon has to do is officially announce his intention to make the 2009 mayoral race more interesting and he’ll have us in his corner. Which is to say, we’ll be there with the gauze after Menino cuts him to pieces with the dull, heavy blade of incumbency.