Activists from Marjory Stoneman Douglas High School discussed the #NEVERAGAIN movement at the Institute of Politics at Harvard Kennedy School. 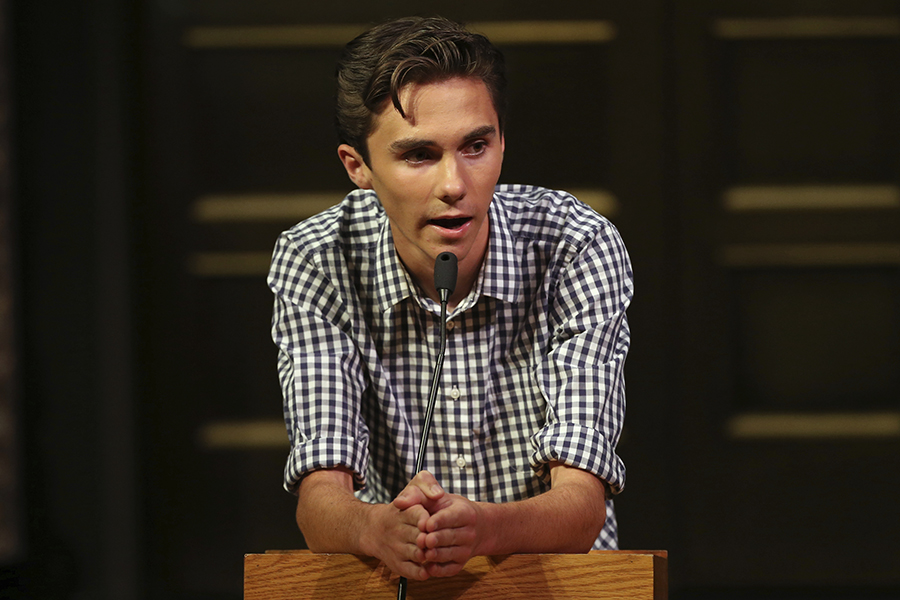 On Tuesday morning, a male student shot a 16-year-old girl at a Maryland high school, hurting two people and sustaining a fatal injury following a confrontation with an armed guard.

On Tuesday evening, survivors of the mass shooting at Marjory Stoneman Douglas High School began their panel at the Institute of Politics at Harvard Kennedy School of Government with a moment of silence to commemorate the events in Maryland and renewed their calls for gun control.

Emma Gonzalez, David Hogg, Cameron Kasky, Ryan Deitsch, Matt Deitsch, and Alex Wind took the stage at the Institute of Politics in a conversation titled, “#NEVERAGAIN: How Parkland Students are Changing the Conversation on Guns.” In the wake of a tragedy that left 17 members of their school community dead, the young activists from Florida have reignited the Second Amendment debate around the country and sparked a movement for common sense gun reform.

During the discussion, the students called on young people to engage in the political process, reminding them of low voter turnout among millennials and insisting that politicians be held accountable for their stance on guns, according to the Harvard Crimson.

“If you choose not to vote on the side of human lives that are innocently taken, thousands of people every year, that’s okay, because we’ll vote you out,” Hogg said, according to the Boston Globe. “It’s as simple as that.”

The activists, five of whom are current students at Stoneman Douglas and one of whom recently graduated, want to break the cycle of mass shootings in America. On the heels of the tragedy, according to the Crimson, they were driven to inspire action and turned to social media to get their message across.

“I’ve seen this happen countless times,” Kasky said during the panel, according to the Crimson. “What happens is we get two weeks in the news, we get a bundle of thoughts and prayers, everybody sends flowers, and then it’s over. And then people forget. … And I said, ‘What’s different this time? What can we do differently this time?’”

Since the February 14 shooting, the Parkland students have been prominent fixtures on both social and traditional media channels. They’ve sat for countless interviews, made several public appearances, and tweeted scores of times to reinforce their message and mobilize others.

And, by some measures, they’re making progress. Though the students continue their push for federal legislation, Florida Gov. Rick Scott broke with the National Rifle Association and signed into law stricter gun limits across the state. Additionally, on March 14, the one-month anniversary of the Parkland shooting, thousands of students across the country walked out of class in support of gun control. And on Saturday, 500,000 people are expected to turn out in Washington, D.C., for the March for Our Lives, according to the Washington Post.

This participation is paramount to the movement’s success, the activists said at Harvard on Tuesday.

“You need to act,” Gonzalez said, according to the Globe. “Acting is very important.”