The bronze statue, "Continuation of a Dream," is a new, permanent feature honoring the civil rights icon. 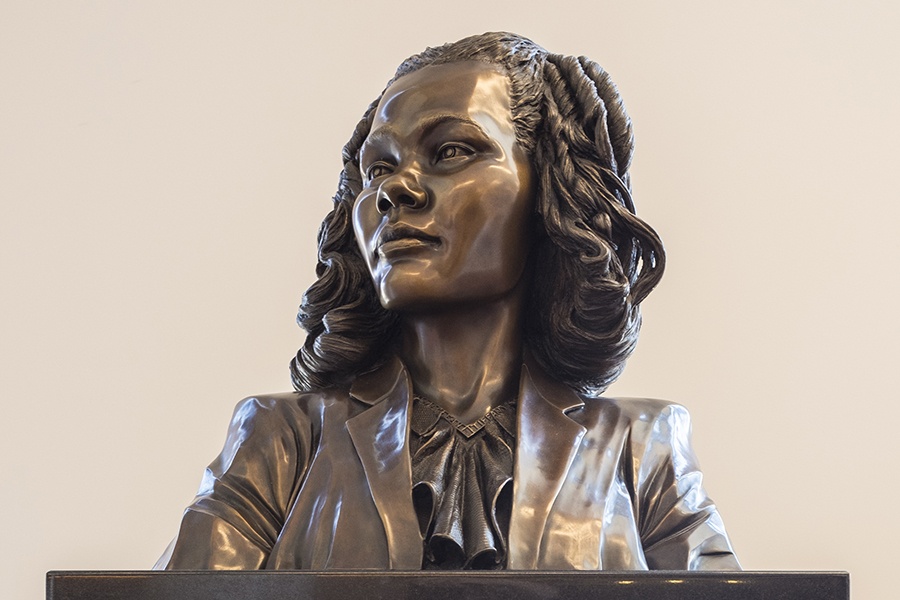 Boston’s Martin Luther King Jr. memorial may still be in its planning phase, but a statue of his wife, Coretta Scott King, is already on proud display.

In conjunction with her birthday on Friday, the New England Conservatory unveiled a new bronze bust of King on Tuesday called, “Continuation of a Dream.” The statue will be a permanent fixture at the Conservatory, which was King’s alma mater, and was designed by the artist MacLean Tiffany to commemorate her human rights and social justice work.

Tom Novak, the interim president of NEC, says the school hopes to honor King’s legacy and her message of tolerance, which is particularly salient in today’s social climate.

“Students, and we as a community, are aware of a lot of social issues that continue to be part of American society and are very concerned,” Novak says. “What she stands for—the values and beliefs that she had—very much resonate with who we are as an institution and with our student body. All this aligned to bring this statue, this bust, to us, as a way of honoring that and keeping it in our consciousness.”

King graduated from NEC in 1954 with a degree in music education, and she was granted an honorary doctorate of music in 1971. Known for her talents as a singer and as a violinist, King met her future husband in the Hub while he was studying theology at Boston University. In 2004, King returned to the NEC campus to give the school’s commencement address. Novak was seated near her during the ceremony, and says having the chance to meet King then and memorialize her now has been an impactful experience for him.

“Not only does it mean a lot to me personally, but I think this is a really wonderful part of New England Conservatory’s legacy,” Novak says. “It’s also given us a chance to look at the history of African Americans here at the school over our 150-year history. … [there is] great momentum building about making sure we really are thinking about issues of diversity and inclusion in our community.”

This statue is displayed prominently in the Student Life and Performance Center’s Blumenthal Family Library at NEC, and perched so that “you can’t miss it,” Novak says.