Boston may be a world-class city, but there are still plenty of problems that need fixing. Emerson College president Lee Pelton is determined to be part of the solution. 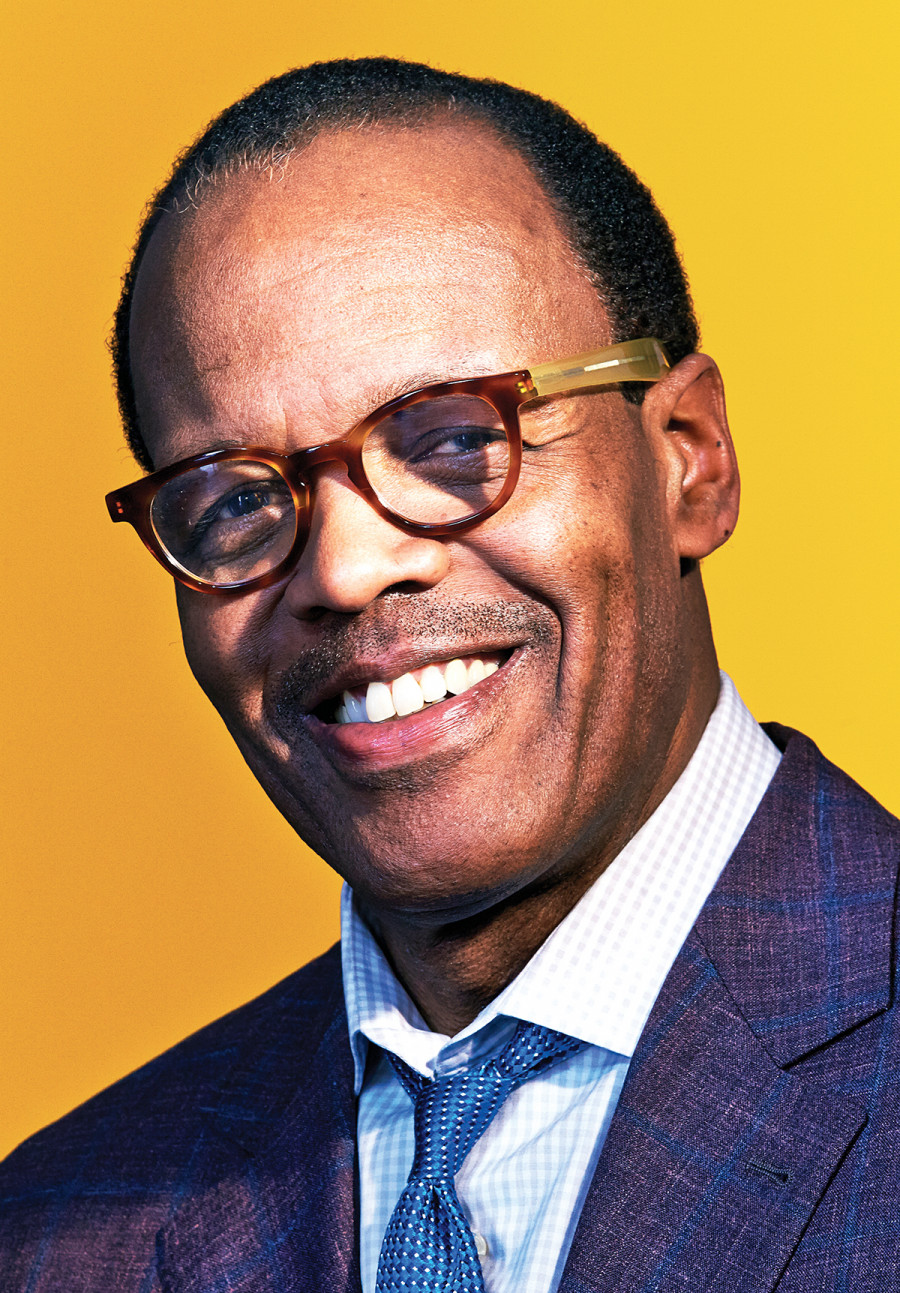 If your image of an academic involves a lot of tweed and a cloud of musty pipe smoke, you haven’t met Lee Pelton. Rocking a fitted blue suit and casually mentioning that he’s going on a 100-mile bike ride (yes, you read that right) on his day off, the president of Emerson College exudes a hipness you might expect from the head of the institution producing more Emmy winners than any other liberal arts school in town and building campuses from Paris to Hong Kong. Now, just in time for early admissions season, he breaks down his vision for the corner of Boylston and Tremont and explains why the college rat race is only getting worse.

You’re a father. How miserable was it being on the other side of the table when it came time for you to go through the college admissions process?
I’ve had to do it three times.

Did it ever get any easier?
No, it gets harder each time. It gets more complex. I think the stress level is just unmanageable now and unhealthy for students and their parents. And that’s something that I worry about. I think it’s a pressing mental health issue, actually, for many students and for their parents, going through a process that is now so very, very competitive. Emerson has become more competitive. When I arrived we were admitting about 48 percent of our students who applied. This year we will admit about 36 percent, and that’s because our applications have grown so dramatically and the demand for an education here is so strong. So I’m sure that students and their parents feel as if it’s a very stressful process. On our end, we try to make it as congenial as possible. We have two early-admit programs, not one, which I think helps. And we have a lot of on-campus programs for visitors, and so I think that also helps.

You started out as a teacher at Harvard before becoming an administrator. What made you move over to the dark side of fundraisers and P & L statements?
Harvard had a profound impact on me in a variety of ways. I was a dean of one of the residential houses and teaching in the English Department. And I discovered as dean that, as much as I loved the contemplative life of research and study, I was mostly motivated by wanting to make a big difference and having an impact on young people. And I thought the best way for me to do that would be to become a college administrator. Early on, in my mid-thirties, enough people said to me, “You’re going to be a college president one day” that I believed that. And so my goal was to become a college president before I was 40 years old. I didn’t achieve that goal. I was 46, actually, which by today’s standards is still quite young.

You have a reputation as one of the more popular college presidents in town. Do you have a theory about why?
I’m principally here for the students. And I feel every day a profound sense of responsibility to ensure that students have the best possible education that an institution can provide them. And I also have a profound sense or profound wish for them that they see their education here as more than preparing for a vocation, but rather preparing to live a life of meaning and hope. To paraphrase Plato, I want them to be fit company, not only for others, but for themselves as well. So that’s the primary motivating interest for me.

Emerson has an amazing location across from the Common and seems to be building like crazy. What do you see as Emerson’s role within Boston?
The world looks to colleges and universities to solve its most pressing problems. And as institutions of higher learning, I believe that we have a special duty to be engaged in the world around us and to be civic-minded. And this is especially true for Emerson: It’s not only located in downtown; it’s embedded in downtown. And our relationship with the city, geographically and thematically, is very porous. It’s a symbiotic relationship in which we benefit and the city benefits. And so our view is that whatever we do for Emerson is also likely to support the city. And just as we are energized by being in Boston, I think Boston is energized by our being here.

How does Boston seem different in 2018 from when you first moved here as a student at Harvard?
I came here from the Midwest. And I grew up in a working-class town that one would describe as populist. But not the populism that we talk about today, but an old-fashioned kind of populism where class distinctions were few. When I came to Boston, the first things I noticed were the class structures. And they were embedded in just about everywhere one went. At Harvard, moving around those green lawns of the yard and in those beautiful red-brick buildings, paintings in just about every space were of dead white men. And if you move about in those spaces today at Harvard, the portraits are different. They’re more diverse. But they don’t represent the diversity of the city and probably don’t represent the diversity of Harvard College. So that was my introduction. And by the way, I love Harvard. I still do. But that’s an example of what I encountered when I came to Cambridge and Boston. And now it’s a very different city. It’s a so-called minority-majority city. More than six dozen languages are spoken in the Boston public school system. And while some of those class distinctions have eroded and dissolved, a recent Boston Globe series suggests that there are still some tough, maybe even intractable, structural issues around race and class that Boston needs to deal with. And I want to be part of the solution to that. I want Emerson to be part of the solution—breaking down barriers and opening doors of opportunity for young people.

The city certainly has a reputation when it comes to racism. How do you tackle that when talking to young people of color who are interested in coming to Emerson?
That’s a great question. I came here more than 40 years ago. When I told my father that I was coming to Boston to study poetry, I thought he was going to drop dead. Not only that I was going to study poetry—I mean, what are you going to do with that?—but that I was coming to Boston, which in his mind was a difficult place for a person of color to be. I think it’s less difficult than that now. And what we try to do at Emerson is to embrace the rich tapestry of voices and races and classes, whether the students are domestic or international students, into a commonwealth of learning.

You came back to Boston after leaving. What keeps you in Boston? What makes you stay here?
I’m a New Englander by temperament. I discovered that when I arrived. I love it.

What is it about the New England character that appeals to you so much?
There are two things that appeal to me about living in Boston. One is the power of dozens of colleges and universities. I’m energized by all of these young people who live and study and work in the city. That’s very important for me. I love that. It feels like a college town and I’m attracted to college towns, very much so. And the other aspect of Boston that captivates me is its extensive social capital. There’s probably more social capital in this city on a per capita basis than any other city in the country. And what I mean by that is if you were to tally up all of the organizations—not-for-profit organizations—that are doing some kind of work on behalf of people who need and would benefit from assistance, it would be a staggering number in this city. And I’ve never seen anything to match the depth and the breadth of Boston’s social capital.

You grew up in Kansas. Any hard-learned tips for surviving a New England winter?
The best advice that I could give someone who’s not had the happy experience of being in a New England winter is to make a virtue out of winter, which means don’t give into it. Get in it. Participate fully in it, which means don’t just hunker down in your apartment or your dorm, but get out into it. Go for hikes. Go snowshoeing if you don’t ski. Ski if you can. At Dartmouth, where I served as dean of the college, oh my gosh. It was very cold and the winters were very long. The Dartmouth Outing Club, they would go up into Canada and make ice tents, and for the weekend, they would sleep in their ice tents and go snowshoeing or cross-country skiing or anything like that. So yeah, make a virtue out of winter. That would be my advice.

What are your favorite things to do in Boston?
Well, I’m happiest in three places: a bookstore, a kitchen store, and what we now call a fitness center. If I can have access to those three places, I’m very happy. When I used to have a real life, before I became president, I did a lot of entertaining and a lot of cooking. I do a little bit now, but not as much as I used to. I love bookstores. I spend hours in them. One of the attractions for me coming to Boston and Cambridge was these great bookstores and buying up old collections of Tennyson, or Thackeray, or whatever it was. I still have those from 40 years ago. And I try to stay fit. I used to run marathons.

Did you ever run the Boston Marathon?
I ran in the hundredth. That was 1996. Then shortly after, I stopped running marathons to pardon my ankles and knees. And in the past four years I’ve taken up cycling.

Do you go outdoors or do you spin?
I went from spinning to going outdoors and now I can’t get on a spinning bike. Tomorrow I’m doing a 100-mile ride. It’s called Seacoast Century.

If you see one of the other local colleges do something impressive, like handle a crisis really well or start up some new initiative, can you just pick up the secret “presidents only” hotline and call that president up?
Oh, absolutely.

Would you say that happens fairly frequently?
Not very frequently. Occasionally. Berklee president Roger Brown and I have become close friends. We take these legendary walks together around Walden Pond to talk about presidential issues and talk about our respective colleges and how we might collaborate. So that’s become a very close relationship for us and for me personally.

Given your long association with Harvard, when the president’s job opened up there last year, were you tempted to apply?
No.

Not at all? Emerson is your permanent home?
Absolutely. I’m exactly where I was meant to be. Because here, I can move things pretty quickly. I can have an impact. Change at large universities—and I’m not talking about Harvard—is like trying to move a cemetery. It’s a really hard thing to do. And here, there are no cemeteries to be moved.