They walked off the job in a snowstorm on Tuesday. 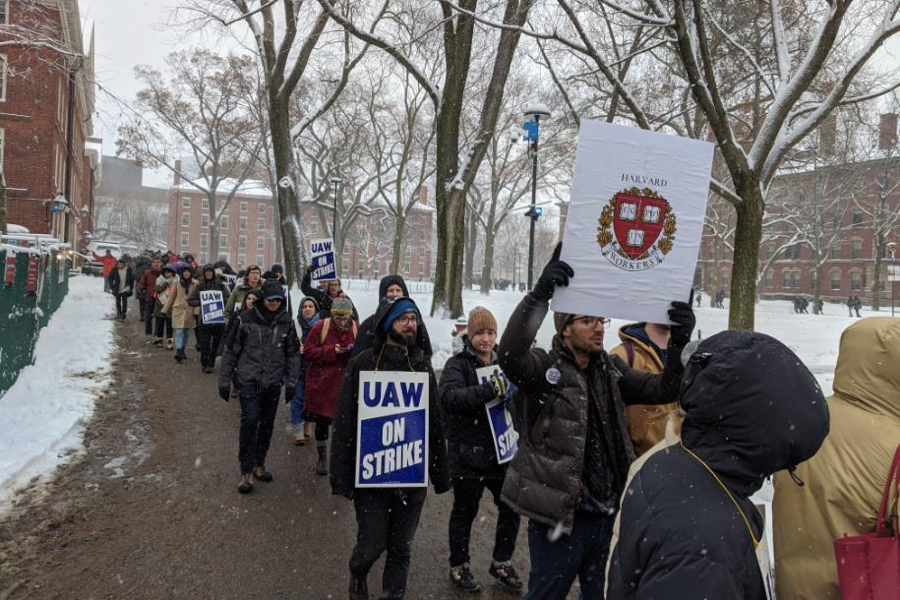 Chanting “What’s up? Time’s up!” and marching down the winding paths in Harvard Yard, a small army of grad students at the nation’s wealthiest and most prominent university walked off the job Tuesday morning. It’s a move they hope will help secure a better contract for the thousands of teaching and research assistants at Harvard, and will send a loud-and-clear message at a time when student workers have been asserting themselves on private college campuses.

“We definitely view ourselves as trying to set a standard here for grad contracts nationwide,” says Cory McCartan, a statistics PhD student and research assistant who’s on the union’s bargaining committee. “These are protections that student workers and workers everywhere deserve. We think it’s important to fight for them here at Harvard and around the country.”

I’m in @Harvard Yard for Day 1 of a grad-student strike. It’s picture-postcard snowy (and 15 minutes early), but 100-plus students are calling for fair wages, affordable healthcare and union protections against harassment and discrimination. pic.twitter.com/p83i9FdWAT

The students formed a union with United Automobile Workers in April of 2018 and have been in negotiations with administrators for more than a year. They’re seeking pay that’s better aligned with the cost of living amid increasing rents—McCartan says pay varies depending on grad students’ jobs, but many make under $3,000 a month, often for less than 12 months each year, and raises have not kept pace with inflation. They also seek a better health plan, and new protections from harassment and discrimination. One of the union’s demands is that the university allow student workers to take up sexual misconduct claims through a third party, rather than via Harvard’s existing internal complaint system.

All workers, including Harvard grad students, should have the right to organize & fight for better wages & working conditions. I’ve joined the entire MA delegation in urging Harvard’s leadership to negotiate in good faith with @hgsuuaw for a fair agreement. pic.twitter.com/x5tOu9SEt8

About 200 professors have signed a letter in support of the striking students and pledged not to retaliate against them for leaving classrooms. Some canceled lectures Tuesday, the last day of classes, as the university heads into finals season. The union, in a message to faculty, asked professors not to take on duties grad student workers usually perform or hire someone to fill their spots, and encouraged them to join the picket and withhold grades until the strike is over. Support has also come in from some prominent voices, including the entire Massachusetts delegation to Washington.

When we go on strike tomorrow, Dec. 3, we don’t just do so as a group of thousands of student workers standing together, who voted to strike with over 90% support.

We also go on strike with campus organizations, community groups, and our elected officials at our back! [THREAD]

In a statement to the student newspaper the Crimson, Harvard spokesman Jonathan Swain said grad students play a “vital role” on campus and that the university “is committed to addressing concerns that have been raised throughout this process,” describing the strike as “unwarranted.”

Harvard is not the first campus to see its student workers rebel like this. Grad students at several colleges—who conduct research, teach classes, grade papers, and perform other tasks—have complained loudly in the past few years that their jobs are critical to the functioning of famed and often incredibly wealthy institutions, but they aren’t treated like valued employees and aren’t able to support themselves financially. More than a dozen private universities have seen grad students unionize since 2016, according to the New York Times, five of which have negotiated new contracts with administrators. Students at Columbia walked off the job in 2018 to pressure their schools to recognize their unions, and the University of Chicago followed suit this year.

Still, the home of the Crimson tend to attract more of the world’s attention than other institutions, even among rivals in the Ivy League. A strike in Cambridge is sure to be watched closely by school administrators facing off with student workers wielding similar demands.

“Grad students everywhere face these concerns and these challenges and it’s important to fight for them on every campus,” McCartan says. “If we can show that it’s possible for a world-class research university to pay its students a fair wage and get them decent health benefits and protections from harassment and discrimination, then hopefully that’ll spread to other campuses, too.”