As Told To: What It’s Like to Be a Massachusetts Elementary School Teacher during a Pandemic

An Arlington public school teacher shares her experience with remote teaching, video chatting with seven-year-olds, and what she misses most about the classroom. 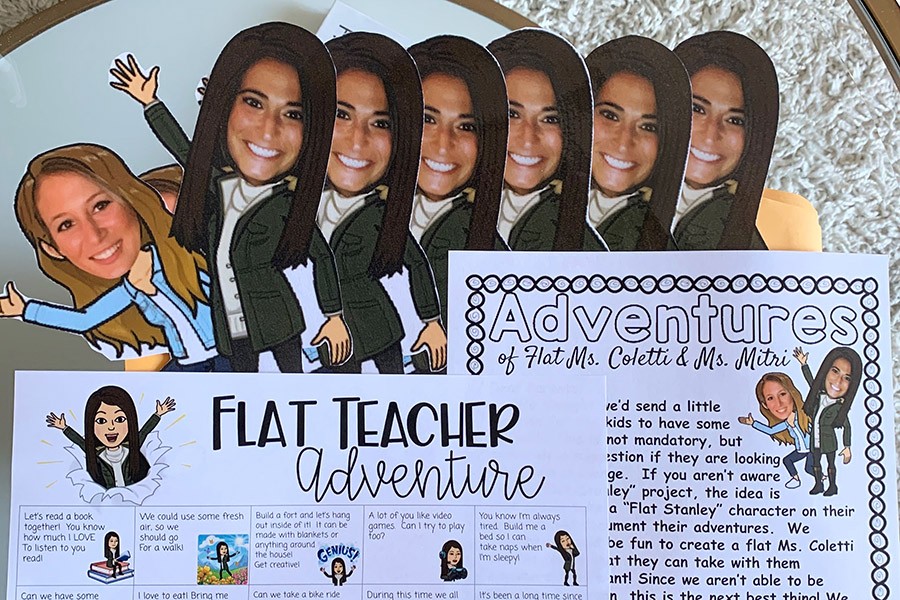 An at-home assignment for students to bring their teachers (Ms Mitri, left and Ms. Coletti, right) with them. Photo by Alicia Coletti

When the bell rang at the end of the day on Thursday, March 12, students at Peirce Elementary School in Arlington said goodbye as usual. Though Governor Baker had declared a state of emergency a couple days prior, they had no way of knowing that they wouldn’t be back in the classroom that Friday, the following Monday, or any day for the rest of the academic year. But second grade teacher Alicia Coletti said she had a feeling from the start. As parents, teachers, and students waited in limbo, she and the other teachers at Peirce spent the following six weeks providing enrichment to kids from afar, reviewing previously learned skills while being instructed not to teach new ones.

Then, on April 21, Baker announced that schools across the state would remain closed for the rest of the year. This week, Coletti and teachers across the Arlington school district began rolling out the curriculum and teaching new material for the first time since March. Here, in her own words, she shares her experience with remote teaching during the pandemic—from what video chatting with two dozen seven- and eight-year-olds looks like, to how her students are learning, and what she’s learning from them.

I knew since March 12, on our last day, that we weren’t going back. I kept saying, you can’t social distance in the classroom. I have 24 students and six kids at a table. And they’re seven, they touch each other all the time, they have more germs than anything, they cough, they sneeze. I think they just kept pushing it because, you know, to tell parents on March 12 that’s the end of the year, there would’ve been an uproar. So we were eased into it, but I always had that feeling.

But gosh, I was still devastated. I cried a bunch of times. And I think that’s the general gist. I talk with my colleagues—we do a mental health check-in every Wednesday morning—and we’ve been doing that since we first left back in March. I think people don’t really realize how much teachers do care, and this affects us too in a way that has nothing to do with academics or how hard it’s going to be to teach. Obviously that’s in the back of our minds, but it’s more about those kids that you care so much about. And there are kids that really need to be in school for the social aspect, or kids that depend on coming to school for food, and so you just worry: Is everyone safe? Are they happy? How are they doing? It’s like an extended family.

And the timing of it is terrible, too, because so many fun things happen at the end of the year. We were going to start a unit on Japan, which they love, and we had field trips scheduled. And we do this thing called the ABC countdown, where we count down the last 26 days of the school year and we do a fun activity every day for each letter. And they know from having siblings that it’s awesome. So I think that was disappointing, just knowing all the things that we’re not going to get to do together.

Making sure that all kids had the technology they needed was the biggest issue in the beginning. Even before we left school they were asking us, can you try to figure out who in your classroom doesn’t have devices at home? The first layer before we moved towards any kind of academics or online presence with the kids was trying to make sure that everyone was able to access it. And Arlington made sure that every kid within the district had a device, whether the family came and picked a Chromebook up, or I even know that some people were hand delivering them. I was just talking to our ELL (English Language Learning) teacher, she’s fantastic, and she was just getting back from dropping off a laptop to a student. So I think Arlington and the technology department did a fantastic job of making sure that everybody is able to get online and learn.

Since schools have been closed teaching has been kind of at teacher discretion. But I typically see the kids through a Google Meet twice a week, and when we do those that’s not academic based. We’ll do some team-building activities or games, but it’s more of a way for the kids to see each other socially and have some of the normality of their usual day. We send home a grid with interactive activities for kids on Mondays, so that they can just log on and do them on the computer, in case they don’t have a printer at home. And then I also send an academic video out every Wednesday. So, we’ll go over a review skill for math or reading, and I’ll record myself and then attach the activity for the kids to try at home. And we do have a Google Classroom, which we just launched two weeks ago, and that’s where their work is posted.

In school, we do a morning meeting every day and they talk to each other and share their feelings and thoughts, and I always start with a question of the day. So each morning lately, I’ve been posting a question of the day in the Google Classroom so that they can interact with each other. Something I’ve also been doing, is I mailed them each “Flat Ms. Coletti and Ms. Mitri” packets, which is the same idea as Flat Stanley. It encourages them to take us along with them as we do different activities, and then they take pictures and post them in our Google Classroom as a way to keep that community feeling.

Starting [this] Monday, we will be pushing forwarding with the new curriculum. So, we’re still trying to figure out what exactly that looks like. But coaches for each subject have been working hard to look at where everyone is in the curriculum across the district and kind of finding a middle ground to start with. And then moving forward, it’ll look like a lot of pre-recorded videos to teach the kids and then they’ll practice on their own, and some Google Meet. We are deciding to move forward now that the governor said school is closed for the rest of the year, and we’re trying to have everyone be teaching the same thing across Arlington, because that was a parent concern.

If there’s a silver lining here, it’s that they definitely are learning a lot. It took a while in the beginning to really have them even understand what the password is, how to log on, and then teaching them how to type, turn their microphone on, turn their microphone off. But they keep playing around with it, and they’re getting better and better. They’ll be pros with this tech by the end of it. Whereas before they wouldn’t even know how to post, now they can reply to each other, and they’re sharing pictures, they’re uploading videos, and they’re starting to become really savvy on their own. It’s hard to troubleshoot through the computer and I would definitely say in the beginning, it required a good amount of parental support, which I’m sure was difficult for parents who are working. It’s weird to say, because I want this all to be over, but we are getting into a groove now.

It’s really encouraging for me as an adult, to watch the way they’re handling this way better than most adults. The kids are so, I don’t know what the word is, but they just can take on anything. It is pretty inspiring how they lift each other up and adapt to all of this, and they’re kind of taking it in stride. They stay positive for each other. They’re open, they’re honest, they share their concerns, their sadness, and they support each other. It’s pretty amazing to see how they’re just trying to learn the best they can, and they want to be independent. Some of the parents say to me, I don’t even know what you guys talk about on your call, because my son will take the laptop into his room and say, leave me alone, I’m on my call.

The kids have asked me what I miss most about the classroom, and I think it’s probably our morning greeting. Every morning, I’m in the hall and they can choose a greeting like a fist bump, or a pinkie shake, or a high five, or a hug. I miss hearing their stories, too, they’re so funny. And honestly, just our days together, I just miss them all. But I would say I miss our greetings every morning most. It was probably the best way to start my day.