The legendary designer talks philanthropy, gender roles, and where she finds inspiration. 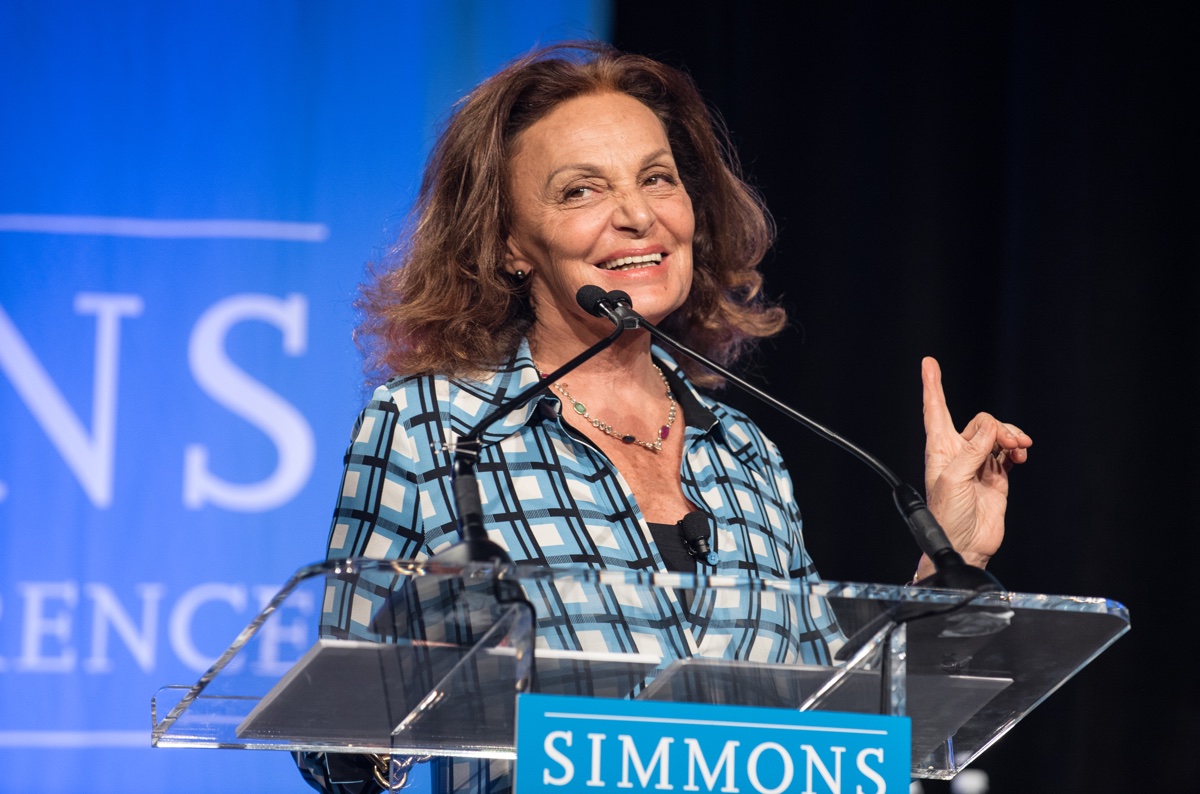 You know you’ve reached icon status when people refer to you simply by your initials. DVF. And there it is. No further introduction is needed.

The legendary designer, whose clothing continues to be in demand more than 40 years after the introduction of her seminal jersey wrap dress, handed the creative reigns of her fashion house to fellow designer Jonathan Saunders last year. The move was not born of a desire to spend retirement lounging on a yacht and raising a toast to her successful career, but to begin a new chapter as an activist. Although, that’s not how she would describe herself.

“I don’t know, I guess after being active for a long time [she chuckles], you could call me an activist,” von Furstenberg says when I meet her at the Simmons College Leadership Conference.

And active she certainly has been. Starting in 2006, when she was elected president of the Council of Fashion Designers of America and set out to tackle the industry’s unhealthy obsession with weight and youth by establishing standards and raising awareness. Then in 2010, she, with the Diller-von Furstenberg Family Foundation, established the DVF Awards to provide grants to extraordinary women who are dedicated to transforming the lives of other women. All the while, she remains a board member of Vital Voices, an organization that gives a voice to female leaders and entrepreneurs worldwide.

So why not just lounge on a yacht? Many people gain power with their success, but few decide to use that influence in such a charitable and public way, especially after working steadily for four decades.

Plus, she finds inspiration in her philanthropy.

“Meeting women is interesting right now, especially young women. All of a sudden they want to be much more involved. So I like that…when you deal with these women from Vital Voices and these woman that we honor with the DVF Awards, they just do it. They just do it and that’s inspiring. Otherwise, what is inspiring today? Not much,” she muses.

Remarkably, von Furstenberg never found her gender to be an obstacle in her own career.

“I chose a job and a profession where it was OK to be a woman and I was also my own boss, so I never had to break ceilings, I never had to compete with men for equal pay. It was much, much later, and really only recently, that I had a better sense of what sexism is about… But I have also not experienced it because I took that position of warrior, of wanting to have a man’s life in a woman’s body,” she explains.

So how does this self-appointed warrior continue to find the strength to fight for other women, to run a business, and be available to her family and friends?

“Because I spend the majority of my time by myself. Otherwise I would not survive. I mean, that is the only place, in solitude and silence, where I can build my strength,” she says.

At that moment, her assistant re-enters the room carrying von Furstenberg’s recently misplaced cell phone, and the brief interruption is a reminder of one of many occasions where this formidable woman might need some strength; in less than 20 minutes, she’s to take the stage as the conference’s keynote speaker. She’ll join notable peers Marlee Matlin and Diane Nyad, both who gave heart-wrenching and inspiring speeches earlier that day.

Does an icon still get nervous?

Von Furstenberg shakes her head. “It’s not about nervous…it’s about winking at yourself in the mirror.”

And with a ciao, she’s off to take the stage.