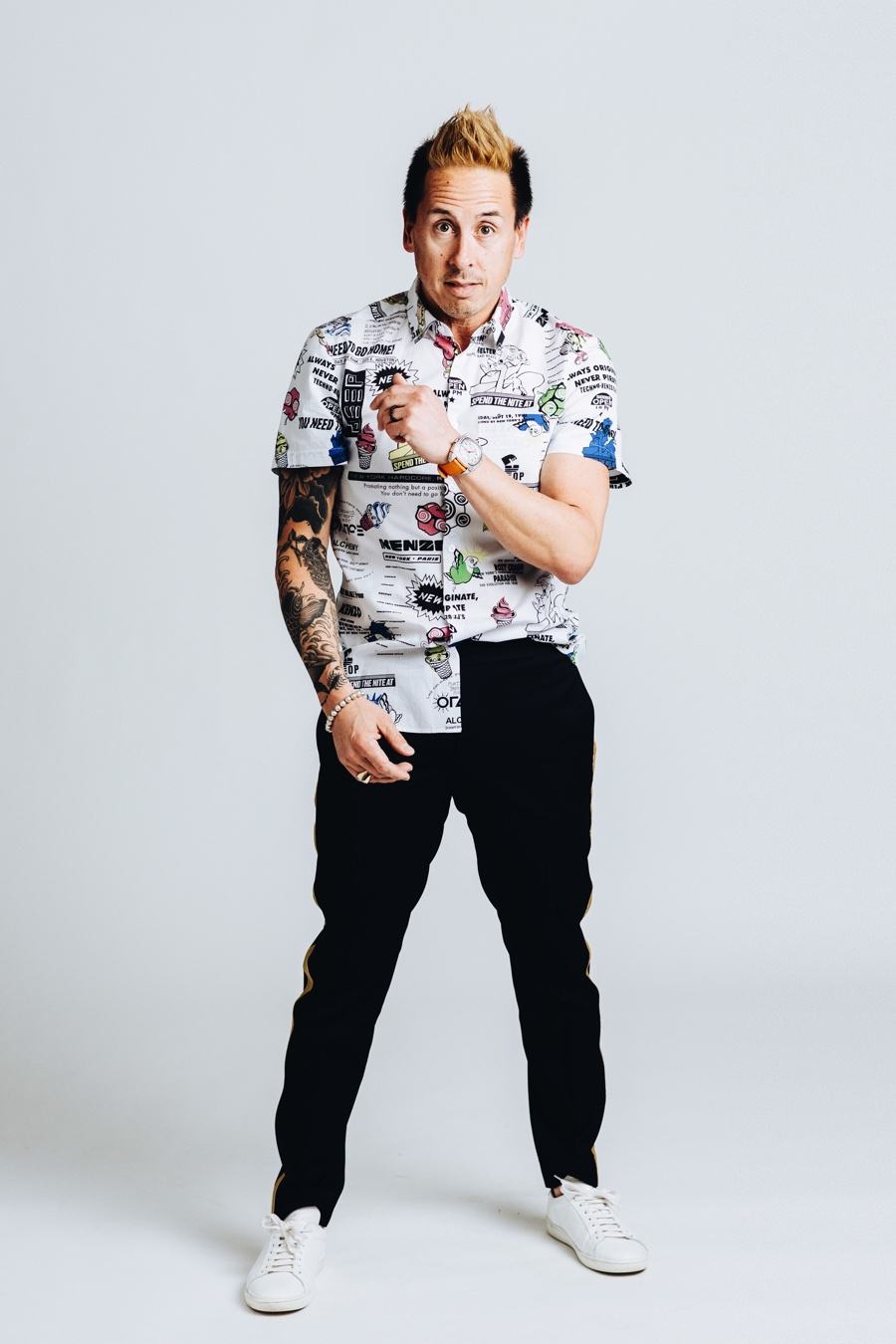 There’s a giant tin of mints up front and I put one in my mouth right before I realized I was going to talk to you.

I did the same thing earlier and it was awkward. So, what do you do? I am a luxury investor and fashion and culture advisor to Puma.

What does that entail? I didn’t even know that was my title at Puma until the Chief Marketing Officer wrote it as an intro for me recently. Basically, I find new designers to do collab collections with, I find new artists to do visual designs, retail designs and apparel designs. I also work with brands that aren’t necessarily fashion to do crossover like Motorola or Polaroid. And lastly, I do retail design, I’m working with Puma on designing a whole new retail experience in New York.

Are you from Boston? Originally from Chicago.

I lived there for a hot minute! It’s a great city, it’s wonderfully calm and not overly exciting, but a great place. I lived there and came here to go to law school and met my wife and got married and had kids. We just got a second home in Miami, so we’re trying to do both.

That is a dream. So law school? It’s a grind. It’s not worth it. At the end of the day all you need to know is – it helped me do risk profile things, like, knowing is this worth it? What’s the exposure in partnering with somebody? How much trouble can you get into or can they get into? And just being cognizant of all that. But I don’t know if its worth the three year slog, especially if you don’t ever want to practice.

Did you ever want to practice? Never. It’s a phenomenal education, but I worked through it full-time too.

How would you describe your style? It’s interesting, its fun, its supposed to be different. I’m forty-five, I have three kids and I live in the sticks.

Where in the sticks? Concord, so everyone at pick-up is wearing khakis and blue shirts and that is definitely not me. I grew up, my entire childhood until I was almost ten, wearing garage sale clothes. My mother was cheap as hell and you got what you got- quirky corduroy with the patches, all that stuff. So, I think over time, I didn’t want to regress to khaki pants and a blue button-up. I’ve tried to be fun and have fun with it.

Do you have any style icons? I guess the only big style icon would be James Bond; he’s in bathing suits, he’s in tuxedos, he did everything. Style just dripped out of everything he did. The way he smoked, walked, drank, everything.

Do you have places you like to shop in Boston? I like the traditional Barney’s and Riccardi every once in a while. I’ll hit up a Bodega opening, but Boston for someone like me is kind of tricky. I like to do more than online, but it’s hard. I’m an investor in a company called Wanderset which is all of the ex Karmaloop guys. They opened up the next version of Farfetch and Mr. Porter. Greg and Dina moved to LA and a few of us in Boston invested. So now I buy some of my clothes through them.

How long ago did that happen? They launched the company in February of last year so they just turned one, and the site went live this past August. So they’ve been selling for six months and they sell brands like Comme des Garcons, they sell Gucci, they sell all the way down to your traditional street brands like Pleasures.

They’re based in LA now? Most of them are LA. Greg and Dina are LA. There’s a few tech guys out here in Boston.

Who does your hair? It’s a bit of a shit show right now. My ten year-old has amazing hair and I was inspired by him to do this, but it’s not as cool as his.

Does he also get his inspiration from you? Totally and vice versa.

Do your kids dress themselves? They do. They’re very much into their own style. One of my boys is super preppy. We try to buy them signature pieces, we buy cheap pieces, we buy basics. The boys are in Target clothes half the time and then we mix it up. I remember when I was growing up, you had to dress a certain way or you were picked on. But not now, which is so cool.

Did your son approve of your hair? He was a little pissy at first and then I was like, you don’t understand, imitation is the highest form of flattery!

Do you get tattooed here? Yes, at Fat Ram’s in Jamaica Plain. They’re a fun crowd in there. And then once in a while, I’ll get a piece in Vegas.