Seeing a lot of facial hair around Boston this month? That might be because it’s Movember—or “No Shave November,” a month dedicated to raising cancer and mental health awareness. Get in on the hair-raising fun with tips, tricks, and products from Boston’s grooming experts. 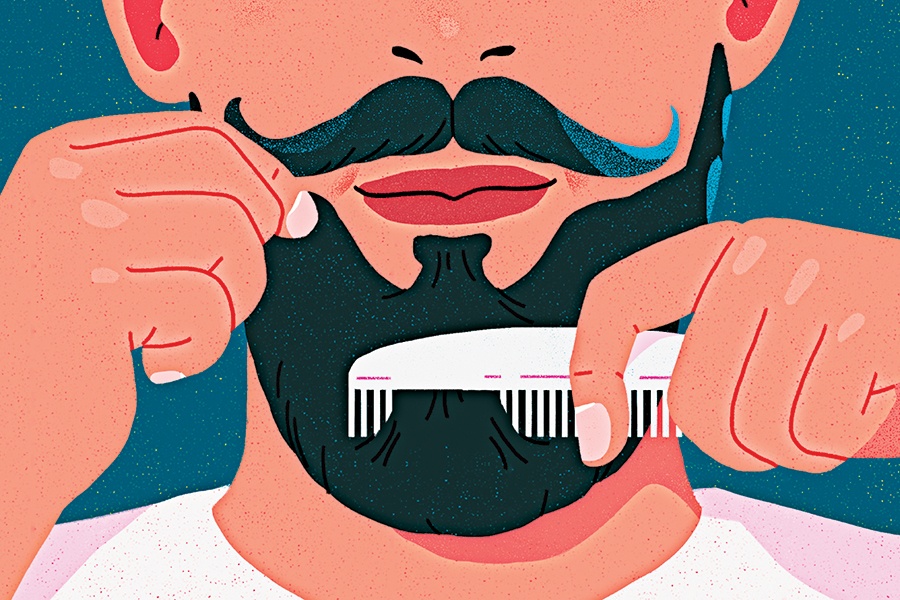 What are the most popular ’stache styles in the city these days? Peter Solomon, owner of Tweed Barbers of Boston, says 2022 is all about the pencil—“trimmed slightly above the top lip and extending just to the corners of the mouth.” Or you can opt for the subtle variant of the pencil: the Clark Gable, which continues a bit beyond the mouth and features a notch etched in the middle, below the tip of the nose. Rarer styles include the modified horseshoe, which is “a more modern take on Hulk Hogan’s famous mustache—but unlike the Hulkster’s ’stache, the top part of the mustache does not obscure the top lip, and the sides turn down only as far as the edge of the bottom lip rather than extending all the way down to the chin,” he explains. Lastly, for those who are more tactile, we see the Rollie Fingers—“think of it as a modified horseshoe, but where the ends of the mustache are grown out very long and then curled using a wax,” Solomon says.

Back in 2014, when bartender Owen Shea began growing what he calls his “dad beard,” he realized he needed something to tame it. Rather than rely on the drugstore brands, though, Shea decided to mix something up in his basement—much to the delight of his customers, who started stopping by the bar for beard oil, not beer. Flash forward eight years, and Boston-born Brothers Artisan Oil—owned by Shea and his wife, Marie—is now renowned for its grooming products. The top three items Marie recommends for guys growing out their facial hair: “The Wash, for gentle cleansing of the face, hair, and facial hair; the Grooming Oil, to keep strands and skin healthy; and the Tamer, for a bit of hold.” Grab a bottle for yourself or the best man in your life online or at Boston General Store in Brookline.

November 30 can’t come soon enough for you? Drop into Boston Barber & Tattoo Co. to lop off that Movember mustache in style, courtesy of a hot shave. Owner Robert Dello Russo presides over the historical shop, which gents used to frequent during the Depression era for two important purposes: “They would get a haircut to look presentable, and because of high crime and fights over theft and money, tattoo artists would use leeches to suck blood out of your black eye when you had a fight,” Dello Russo explains. These days, there are no leeches to be found here—just haircuts, tattoos, and those heavenly straight-razor shaves. The process begins with a hot towel to open up the pores. “From there, we massage pre-shave oil into the face and add another hot towel on top of that to really soften up the beard,” Dello Russo says. Then it’s time for the razor, a cool towel to close the pores, and an after-shave balm that guarantees you’ll coast into the holiday season with baby-smooth skin.