The legally blind athlete will run the course twice on Marathon Monday. 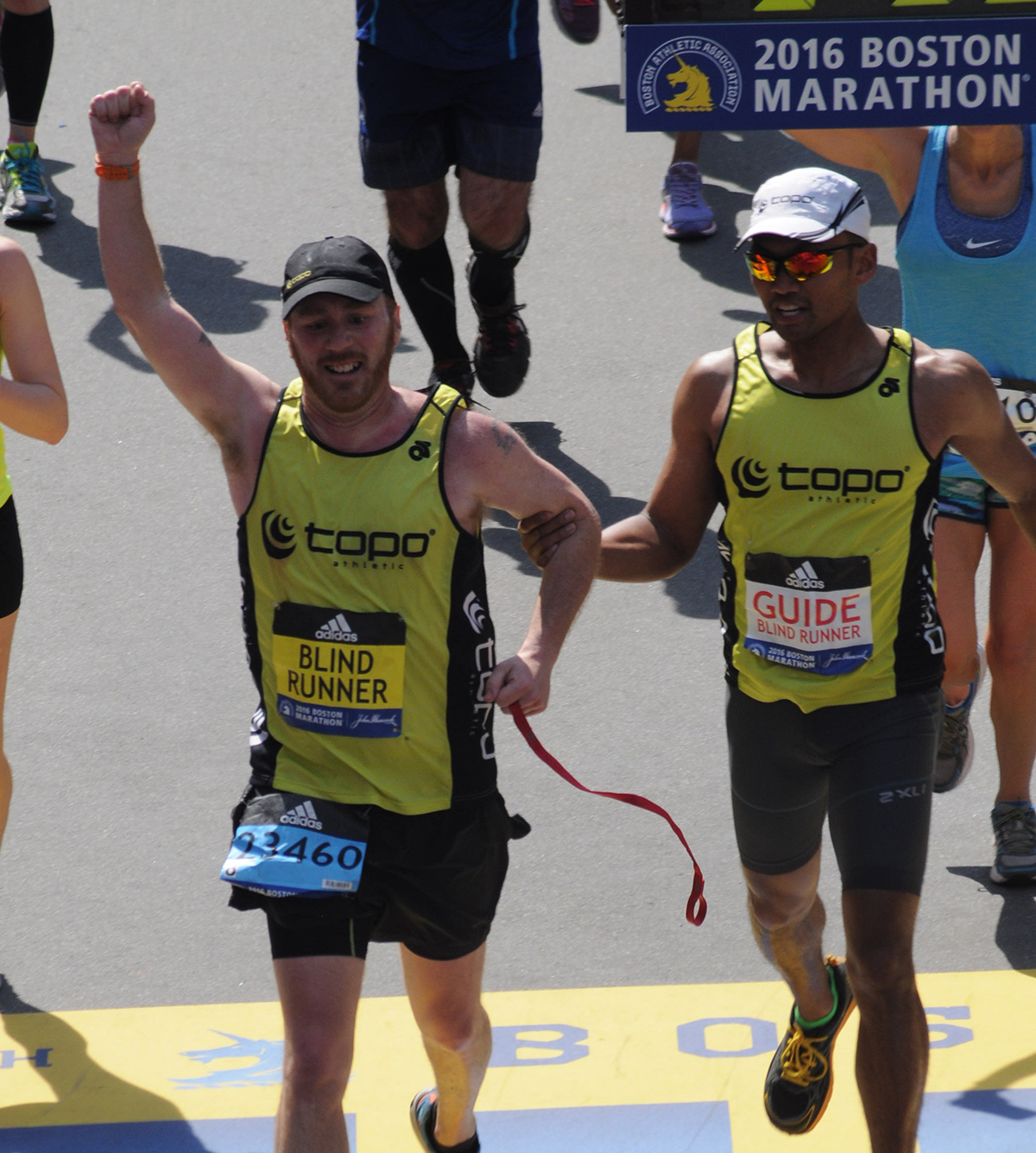 On April 17, Kyle Robidoux will reach the Boston Marathon finish line around 4:45 a.m., hours before a winner is crowned. But his journey won’t be over—it will be just beginning.

Robidoux, an ultramarathoner, is running his fourth and fifth Boston Marathon this year, back to back. He’ll start by running the course in reverse, from Boylston Street to Hopkinton. About an hour after he arrives at the starting line, he’ll set off for another 26.2 miles with the pack.

This feat would be impressive—or insane, depending on your perspective—for any runner. But Robidoux has an added challenge: He’s legally blind.

“I wanted to push my boundaries and do something a little bit different for this year’s Boston Marathon,” he says. “Much like sighted runners, the opportunities are endless. We always want to push boundaries, find new challenges, see how far our body will take us.”

Robidoux was born with a degenerative eye disease called retinitis pigmentosa, which over time impairs an individual’s field of vision, in most cases eventually resulting in total blindness. At age 41, Robidoux has retained partial sight longer than doctors predicted, but likens his condition to having “extreme tunnel vision, very similar to looking through a paper towel roll.”

He can run alone on routes he knows well, but for most trips relies on sighted guides, whom he trains through a program called United in Stride, which matches visually impaired runners with sighted partners. On Marathon Monday, he’ll run with one guide to Hopkinton, and with two back to Boston.

So why the twin marathons this year? Robidoux says there are several reasons.

One, he’s embarking on a 100-mile race in July, so a double Boston offers valuable training. Two, the act raises awareness for his marathon cohort, Team with a Vision, and for visually impaired runners in general. And three, the stunt will force Robidoux to experience the race in a whole new way.

“I’ve mentally enjoyed running Boston, but I’ve always set very concrete pace and time goals,” he says. “This is an intentional way to have to do the actual marathon at a much slower pace, so I’m not going to be concerned with those time goals. I’m hoping to stop and say hello to friends and give out hugs to family members and really enjoy the crowd’s energy.”

And while Robidoux says he has a few concerns about the undertaking—like refueling properly, and preventing his muscles from stiffening between marathons—he’s not letting them bring his energy down.

“I’m super excited to bang out 52 miles,” he says. “I’m thrilled and pretty stoked to experience this with three guides who, without them, I wouldn’t be able to do it.”

If you’re interested in becoming or being matched with a sighted guide through United in Stride, click here.